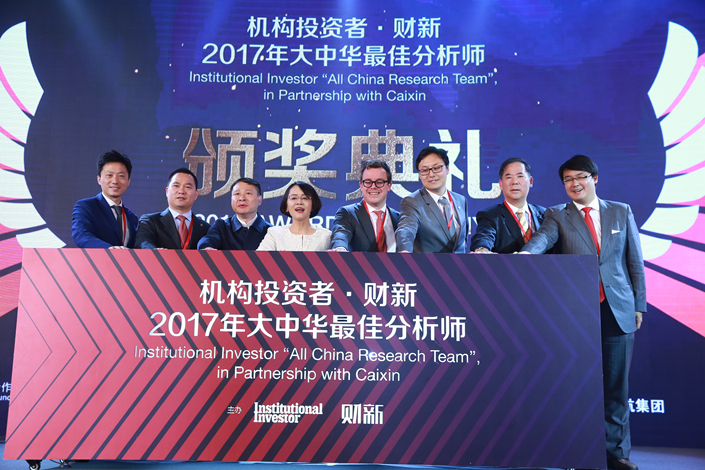 Caixin Media Editor-in-Chief Hu Shuli (fourth from left) and other representatives of Caixin and Institutional Investor host their companies' inaugural awards ceremony Wednesday in Beijing as they recognized the best analysts of China's business. Photo: Caixin

China International Capital Corp. (CICC) won the awards for the best research team on the Chinese mainland and the most influential Chinese research institution at the first-ever Caixin Media and Institutional Investor awards.

CICC emerged as the big winner at Wednesday’s ceremony. The country’s first homegrown investment bank swept the awards, which sought to recognize outstanding performance among Chinese business and financial analysts in 22 sectors, as well as influential mainland research institutions.

Huatai Securities was ranked second in the category of the most influential Chinese research institution. It was followed by Citic Securities, Guotai Junan Securities, China Merchants Securities and BOCI Research.

“Currently, in China’s financial market, we would like to see more research reports that creates value for investors by basing their advice on fundamentals and evidence,” Caixin Media Editor-in-Chief Hu Shuli said during the award presentation ceremony on Wednesday.

As of the end of October, China’s stock exchanges had over 3,500 listed companies. The combined market capitalization of 58 trillion yuan ($8.74 trillion) is about 73% of China’s estimated gross domestic product for 2017. It is much lower than the nearly 140% for U.S. stock markets, meaning China’s capital market will have a lot of room to grow, analysts say.

Offshore institutional investors will likely have a bigger role to play in China’s capital market.

Following the launch of connect programs of stock and bond trading between Hong Kong, Shenzhen and Shanghai, more mutual access of markets is expected to come. The inclusion of A-shares in MSCI benchmarks and the gradual opening of markets to foreign firms are setting a stage for participation by more non-Chinese investors.