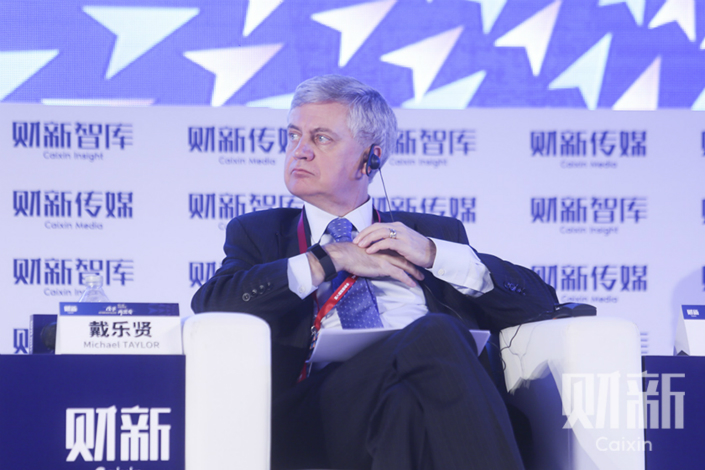 Michael Taylor, the Moody's chief credit officer in the Asia Pacific, said at the 8th Caixin Summit in Beijing on Thursday that the investments that are part of the "Belt and Road" initiative are overall a situation in which "the positive factors outweigh the negative ones." Photo: Caixin

Overall exports of iron and steel, areas in which China slashed 65 million tons of capacity last year, have declined globally, but “the Belt and Road countries have taken on an increasing share of current exports,” Michael Taylor said Thursday in Beijing.

The proportion of China’s iron and steel exports that went to Belt and Road countries rose to 67% in 2016 from 65% two years earlier, according to Taylor, citing a recent Moody’s report.

The Belt and Road initiative — proposed by Chinese President Xi Jinping in 2013 to strengthen ties between China and nations in Eurasia and beyond — is designed to economically benefit China and a host of countries along ancient Silk Road trading routes. But many critics have claimed that the initiative’s real goal is increasing China’s geopolitical influence.

When it comes to investments that are part of the initiative, “the positive factors outweigh the negative ones, both for China and for the countries which are recipients,” Taylor said, adding that his conclusion “doesn’t take into account geopolitical considerations.”

Besides helping with overcapacity, another benefit of the Belt and Road initiative is to facilitate the internationalization of the yuan, Taylor said. As of June, China had expanded its bilateral local currency swap agreements to 36 countries, of which 24 are countries along the Belt and Road, according to Moody’s.

Both warned of potentially high risks in investing in Belt and Road projects.

“A significant amount of Belt and Road investment has flowed to countries with relatively weak credit profiles,” Taylor said, adding that 42 out of 68 those countries are either rated below investment grade or not rated by Moody’s at all.

Kanak said that “managing risks is the core of everything” and investors should never neglect economic and environmental due diligence.