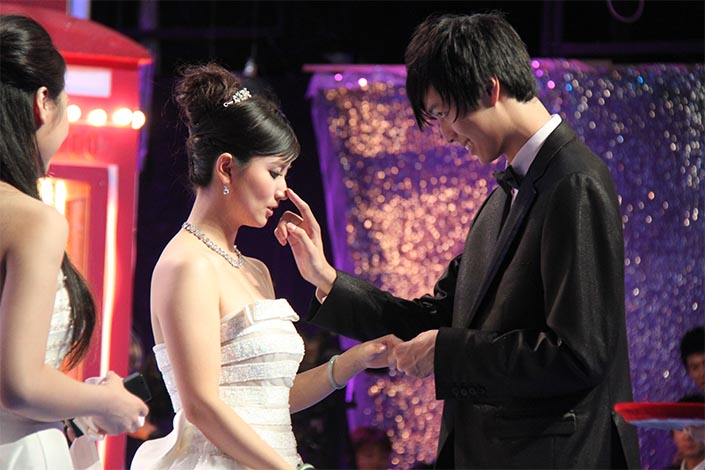 Zhenai Inc. currently has more than 140 million registered users, and made a profit of 100 million yuan ($14.6 million) in 2016. In the picture above, a couple who met through Zhenai get married on a television show. Photo: IC

Dating service Zhenai Inc. may have finally found a match.

The Shenzhen-based online matchmaker has secured a new majority shareholder, after it failed to go public both at home and abroad.

Private equity firm PAG has completed the acquisition of “a super-majority controlling interest in Zhenai,” the companies said in a joint statement Monday.

The financial details of the deal have not been disclosed. PAG, which has offices across Asia, has investments in numerous firms, including China’s largest supplier of industrial gases, Yingde Gases Group; consumer finance group Home Credit China; and Universal Studios Japan.

Xiao Suining, partner and chairman of PAG China, has been appointed the new chairman of Zhenai, replacing founder Li Song, who will remain a minority shareholder and a member of the board of directors.

Unlike China’s Momo Inc. — which facilitates casual dates much like U.S. app Tinder — platforms like Zhenyao and Baihe target people looking for serious long-term relationships. The firms even offer professional matchmakers to assist love-seekers in finding significant others.

Zhenai has been seeking an initial public offering outside the Chinese mainland since 2010. It structured itself as a variable interest entity, a corporate structure typically used by Chinese companies looking to list overseas.

But the plan didn’t work out. In February of this year, discussions were underway to sell Zhenai to Shenzhen-listed drone-maker DEA General Aviation Holding Co., as a means of the matchmaker gaining access to the domestic stock market.

However, earlier this month, DEA announced it was dropping the deal, saying Zhenai board members and shareholders would not approve the transaction.