By Wang Pengjun and Mo Yelin 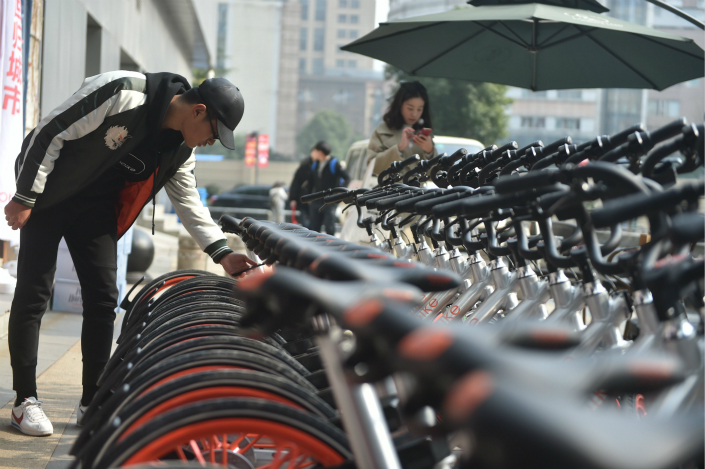 As of August, there were 530,400 shared bikes in the city of Guangzhou alone, amounting to one bike for every 9.69 people on average, according to a think tank. Photo: Visual China

The local government of the southern metropolis of Guangzhou has singled out bike-sharing giants Mobike and Ofo for violating local regulations.

The Guangzhou government on Wednesday accused the companies of “neglecting the public interest” by putting 2,933 new bikes on the city streets since September.

In August, Guangzhou joined several Chinese cities such as Shenzhen and Shanghai that banned bike-sharing companies from adding new two-wheelers to their cities.

In response to Guangzhou’s statement, Mobike said it had not violated regulations because the bikes had already been in the city before the ban.

Irresponsible parking has been a major cause of complaints leveled at the startups since the shared-bike craze first took off in 2016. Commuters and negligent riders often haphazardly leave their bikes along sidewalks and street curbs, creating a nuisance for pedestrians and obstacles for drivers.

As of August 2017, there were 530,400 shared bikes in the city of Guangzhou alone, amounting to one bike for every 9.69 people on average, according to a think tank affiliated with the 21st Century Business Herald, the city’s leading financial newspaper.

The saturated market and increasingly strict regulations have taken some off the power out of the two-year bike-sharing boom as several smaller companies, such as Wukong and 3Vbike, have gone bankrupt.

Bluegogo, one of China’s top second-tier bike-sharing companies became the latest casualty as the company has ran into serious financial problems.

These bankrupt or financially troubled bike-sharing companies have become a source of concern for regulators, as some users have complained that they have not been able to get their deposits back.

These companies are on the hook for the 1 billion yuan ($151 million) in deposits they have collected from users, according to a study from Ant Financial, an affiliate of Alibaba Group Holding Ltd.

On Thursday, a press official from the Ministry of Transport said China would work on policies to better manage the problem and “take proactive measures” to prevent risks.

The deposits collected by shared bikes companies have caught the attention of Chinese financial regulators. In May, the People’s Bank of China and the Ministry of Transport released a draft report that said these deposits have to be strictly separated from other funds to avoid misuse.