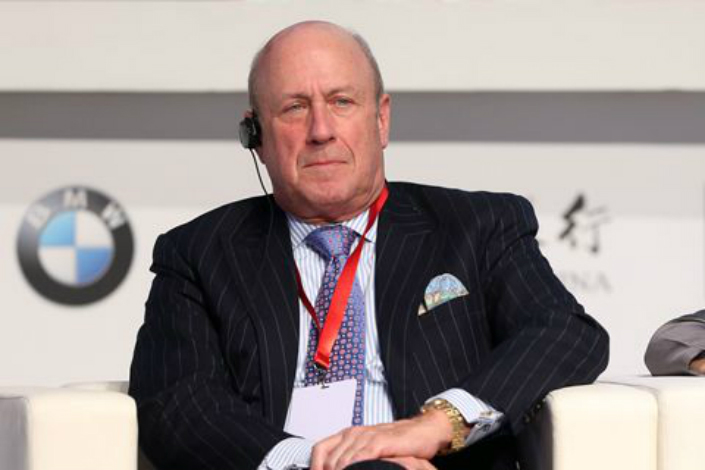 U.S. President Donald Trump has not been shy in promoting how well he thinks his recent visit to Asia this November went.

The commander-in-chief tweeted that his “12 very successful days” mean that the U.S. is “respected again in Asia.”

However, Douglas H. Paal, Vice President of the Carnegie Endowment for International Peace, begs to differ.

“I think the trip was not ambitious enough,” Paal told Caixin reporters in Beijing on Oct. 14, “whether in security or in economic terms.”

Before joining the Carnegie Endowment for International Peace, Paal was the vice chairman of JPMorgan Chase International and an unofficial U.S. representative to Taiwan as director of the American Institute in Taiwan.

The 12-day tour saw the American leader travel to five different countries, assess relations between the United States and the region’s key actors, and oversee trade deals. The president also attended a meeting of the Asia-Pacific Economic Cooperation group in Da Nang, Vietnam.

North Korea has repeatedly tested missiles over the Sea of Japan, reaching the Pacific, as well as allegedly setting off nuclear bombs.

During the trip, it was clear the Trump administration was mainly focused on two issues: trade and North Korea. “He came ready to talk about smaller issues like North Korea, and particular bilateral trade issues,” Paal said.

The following are excerpts of Caixin reporters Qing Ying and Xu Heqian’s interview with Paal.

Caixin: The “Indo-Pacific Region” was an idea talked about by President Trump. How do you view India’s role pertaining to China in the Pacific?

Douglas H. Paal: The administration has been very unforthcoming in the content of its Indo-Pacific strategy. They have not done much briefing of friendly governments about what this is. The president’s own speech on the strategy — that was given in Da Nang, Vietnam — actually came up very short on details. It’s led to a lot of speculation. We know that part of the concept is driven by a Japanese proposal from 10 years ago, the Security Diamond: Tokyo, Delhi, Canberra and Washington, cooperating with common values and common expectations. There is also an infrastructure-development portion to this strategy, which looks like it could be competition for the Belt and Road initiative (BRI) or could be cooperation with the BRI. We don’t know the answer to that. I know that many officials in Washington believe that China will see this Indo-Pacific strategy as a kind of new rebalance to Asia, new pivot to Asia. And they expect it to be viewed by the Chinese as trying to contain China. I think that’s what they want, and I think that’s probably not well-advised. But again, we know very little about what the meaning of the strategy is. It’s premature to make too many comments.

Caixin: China now is not willing to do more on North Korea. Do you think this will result in the deterioration of the Sino-American relationship?

Paal: I think China has done a lot on Korea. There are many people in Washington who believe that China can actually solve the problem of Korea. I think that’s too much of an expectation. The North Korean attitude towards China is very mixed. Lots of resentments, concern, and so China has done a lot on most areas of economic cooperation with North Korea to reduce it, to sanction it — except the delivery of fuel oil. I think that if North Korea continues to be provocative with missile and nuclear tests, China will even look at that aspect of it. But in the end, China cannot tell North Korea that’s its security does not lie in nuclear weapons and missiles. That has to be negotiated between the United States and China. So, I’m hoping that the American administration has a realistic appreciation of that and doesn’t believe everything is going to be done by China. But China needs to continue to work on these new sanctions and make them effective so that North Korea will feel pressure to come to the negotiating table. It’s going to take some time. Between now and the time North Korea is ready to come to the negotiating table, some dangerous things can happen. We’re going to need to stay in close contact with China over how to deal with those dangerous things, whether it’s nuclear tests, missile tests or other kinds of provocations.

Caixin: How would you evaluate Trump’s first visit to Asia? Did he articulate enough about the U.S.’s strategic priority?

Paal: No, I think the trip was not ambitious enough — whether in security or in economic terms. In economic terms, we should have been seeking more opening of the Chinese market. They really didn’t seek that. On the security side, we need to articulate the Indo-Pacific strategy more clearly and have a picture of how we can avoid long term-friction, potential conflict, between the U.S. and China. As China grows more powerful in a part of the world where the U.S. has long had powerful relationships of its own, avoiding conflict is going to be a major objective for a long time to come. President Xi Jinping has a new mandate, and he is energized and this will be a good time to talk to him about the big picture on security. But I don’t think Mr. Trump came ready to do that. He came ready to talk about smaller issues like North Korea, particular bilateral trade issues.

Caixin: What is reason behind this? Was the Trump administration not prepared?

Caixin: Do you think that Donald Trump is an easy guy to manipulate?

Paal: I have the impression, unless we get some new indication from Trump, that Chinese officials have figured out how to deal with him very well.

Caixin: So Mr. Trump said he didn’t blame China on trade, what’s your take on this?

Paal: What I take from that is, that he’s saying that China is doing what China can to protect its market, and the U.S. should do what the U.S. can to protect its market. Then he said the blame for this is on the presidents before him. He’s trying to turn this international trade issue into a domestic political issue. The answer to that is likely to be, when he goes home, to make announcements about tariffs and quotas on products from China and other countries. I have a feeling that this is going to be a net negative for the U.S. over time. It will be appealing for some interests for a short time. That’s what he’s attempting to do for primarily domestic purposes.

Caixin: During this trip we have seen that the Chinese side has oversaw a gift package to Trump. Based on your observations, what might be the biggest bargaining chips that Trump gifted to China? Or do you think that for the first trip Trump doesn’t have to give some concessions to China? Is China prepared for this kind of situation?

Paal: I’m not aware of concessions that Trump brought for China. I think because of that the Trump administration didn’t really ask much of China other than continued cooperation on North Korea. We don’t even have announcements of new elements of cooperation on North Korea. It’s simply a continuation of what China has been doing. The American administration brought some business people along, they only announced $9 million in contracts. The $250 billion announcement was by the Chinese side. So they’re trying to offer chips to Mr. Trump, rather than the other way around.

Caixin: South Korea is trying to rebuild its relationship with China. What will be the consequences of South Korea’s choice?

Paal: China is trying to rebuild its relationship with South Korea. A lot will depend on how it unfolds. Some people have told me in recent months that Mr. Xi Jinping’s goal now, from a strong position domestically and internationally, is for China to try to improve relations with all of its neighbors. We’ve seen, not just an attempt to get past the THAAD issue with South Korea, which I think has been counterproductive to Chinese interests in the last two years. But also we have seen a new agreement with Vietnam on the South China Sea and some talks with the Japanese about the possibility of a summit meeting in Japan next year. Maybe China’s going to restart relations with the neighborhood. The U.S. should welcome that, and the neighbors should welcome that as well.

Caixin: The Korean peninsula issue is now more important than the cross-Taiwan Straits issue. We’ve seen that if China can do more for the U.S. on the peninsula issue, would it be possible to ask for an exchange?

Paal: Well, I’m sure they can ask but I’m sure the U.S. will make a mistake if they tried to be trading one set of problems for another. Mixing them up only makes them more complicated and harder to resolve. Keeping them on a separate track is a more practical way of handling it. Mr. Trump has shown confusion about this. He’s tried to confuse cross-straits relations with trade and Korean relations with trade. I hope he learns that this is not a smart approach. The problems become more difficult to manage, rather than more manageable.