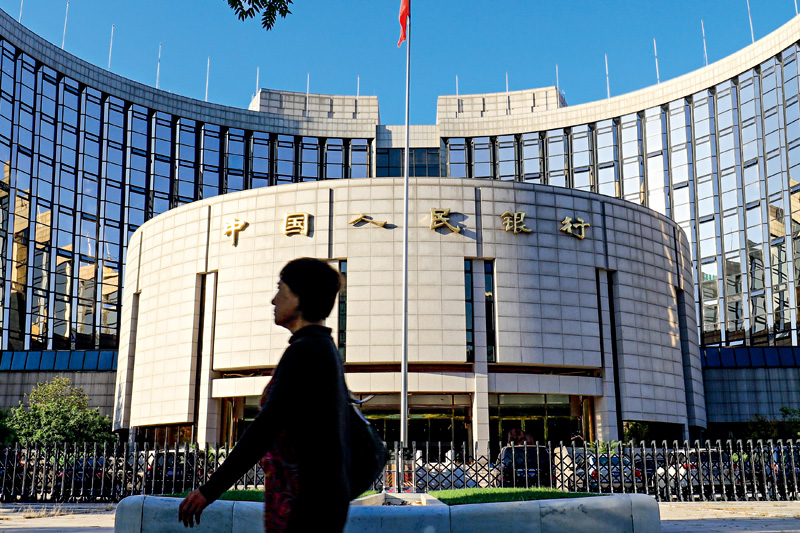 The People's Bank of China (above) and other regulatory bodies have unveiled a draft regulation that the central bank says aims to reduce arbitrage and ensure the healthy development of the entire asset management sector. Photo: Visual China

China’s $15 trillion market for asset management products is facing a new era of stricter oversight as regulators have hammered out sweeping rules to rein in financial risk and curtail the rampant growth of the shadow banking sector.

This joint effort of the central bank and top regulatory bodies aims to put an end to the extraordinary exuberance in China’s asset management market by closing loopholes that allow regulatory arbitrage, cutting excessive leverage and curtailing shadow banking in a market that was worth 102 trillion yuan ($15 trillion) at the end of 2016.

Specifically, the rules, set to be fully implemented in mid-2019 after a consultation period, require financial institutions to end the practice of guaranteeing the principal and interest for investors. Instead, financial institutions will have to offer investment yields based on the net asset value of their products that actually reflect the performance of the underlying assets.

For years, Chinese investors, mainly small retail customers, have poured trillions of yuan into lightly regulated asset management products, drawn in by returns that exceed the standard bank deposit rate and a belief that the government or the banks would bail out investors hit with losses.

But as institutions invested funds raised from investors via fixed-rate, short-term products into volatile assets such as bonds, stocks, real estate and each other’s asset management products, misalignment risks mounted. The stock market rout in 2015 and growing fear of bond defaults since last year have fueled such concerns.

With these new rules, regulators are aiming to break the implicit guarantee and reduce the excessive leverage that has driven the boom of the asset management market. The goal is to bring the asset management business back to providing fair and transparent wealth management services for its clients, analysts said.

But achieving the goal won’t be easy. “Both financial institutions and regulators want to break the implicit guarantee, but who will dare to be the first person to try it?” said a market source, who said the rules against repayment guarantee may drive institutions to use more subtle and sophisticated approaches to lure investors with promised returns.

The rules said institutions providing implicit guarantee will be punished. But if losses occur, “it will test the tolerance of regulators and the government,” said a regulatory official who declined to be named. “In China, it is a matter of social development and stability.”

The new rules outline regulations covering asset management products issued by banks, trust companies, insurance companies, securities firms, funds and futures brokerages. Under the new rules, unified standards for leverage ratios, risk reserve funds, investment restrictions and other requirements will be applied to all kinds of asset management products that are currently overseen by different government bodies, according to the draft document released by the central bank on Nov. 17.

The release of the new rules marks an important effort to enhance coordination and consolidate supervision among different regulatory bodies as the financial system grows more interconnected and complex, posing challenges for regulators to identify risks that have fallen between the cracks.

The issuance of the new regulation is the first major regulatory action after the establishment of the State Council’s Financial Stability and Development Committee, which is housed by the central bank. Caixin learned from sources close to the matter that the issuance of the new rules was among the topics discussed at the inaugural meeting of the new committee on Nov. 8, chaired by Ma Kai, vice premier and the committee’s president.

But efforts to draft the rules on asset management products have been going on since last December, when the government set up a special working group of officials from the central bank and the regulatory bodies overseeing banking, securities, insurance and foreign exchange.

A draft document first circulated online in February, sparking wide discussion on the regulatory overhaul. Caixin learned from separate sources that the discussions went back and forth among regulators for a while. And although most of the rules were settled around May, disagreements over details persisted. “It was like dancing on eggs,” said one regulatory official.

The regulations have gone through four revisions, and consensus was reached on top of compromises, said another source close to the regulatory bodies.

The final version of the rules requires financial institutions to set aside 10% of their management fees as a risk reserve, replacing a variety of requirements currently imposed by multiple agencies.

The draft rules also require financial institutions to set up a separate account for the assets of each management product so they can manage, examine and calculate these assets separately. Financial institutions are not allowed to roll over or pool funds together or to price products in a way that doesn’t correlate with the returns on assets. Regulators will also require institutions to strengthen their liquidity management to guard against risks from mismatches between the duration of products and the maturity of assets. Closed-end asset management products should have a maturity longer than 90 days, according to the rules.

The wealth management business of banks has exploded over the past decade, surging to nearly 20 trillion yuan from several hundred billion yuan. The business has become the biggest segment of China’s asset management market. More than 40% of the money that goes into banks’ wealth management products gets invested in bonds, fueling demand for the market.

As regulators have clamped down this year, the total value of outstanding wealth management products has declined slightly between April and June to 1.9 trillion yuan, according to data from the Banking Wealth Management Product Registration & Depository Center.

Managers of banks’ wealth management products may have gotten a break with an allowance in the regulations for nonstandard credit assets, which are illiquid assets that are not traded on the stock, bond to money markets.

A draft of the rules that Caixin saw in February had banned bank wealth management products from investing in nonstandard assets such as trust loans, entrusted creditor’s rights and banker’s acceptance bills. However, the latest version of the rules did not contain that ban. Instead, they required the banks to follow specific requirements for liquidity management, investment limits and risk reserves for investments in nonstandard assets.

Official data showed that nonstandard assets accounted for 16% of total investments by banks’ wealth management products as of the end of June.

Out of the shadows

According to the new rules, the central bank will set up a national statistics system for asset management products with unified standards and detailed classifications to collect information on all products. Financial institutions will be required to report the issuance and termination of every product they issue so regulators can track the market.

Industry analysts said such efforts will lay the groundwork to build a comprehensive financial industry statistics system, which does not exist in China.

As trillions of dollars worth of investment funds get channeled to risky borrowers through asset management products, the shadow banking system has expanded quickly outside regulators’ oversight.

Industry analysts said the massive credit flows going through the shadow banking system have not been included in the central bank’s monetary statistics, making it difficult for officials to get a true picture of the financial market.

A fund manager told Caixin that while the planned central bank database will collect information from the issuers’ side to help regulators monitor risks, it is also important to collect and disclose information about underlying assets that the products invested to better protect investors' interests.