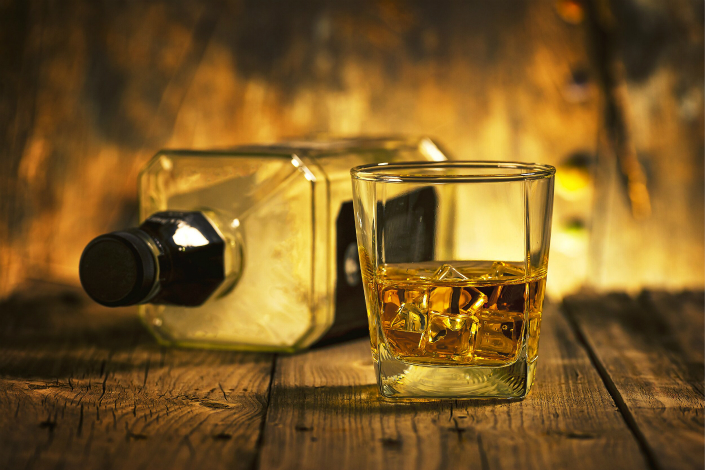 Consumption of methanol, the chemical found in the poisonous whiskey, can cause damage to the nervous system and lead to loss of sight and possibly death, according to medical professionals. Photo: Visual China

China’s food safety watchdog has issued an alert about counterfeit whiskey spiked with the chemical methanol, which left at least 22 people hospitalized on Friday at a bar in Heyuan in the southern province of Guangdong.

The China Food and Drug Administration said in a notice late Saturday the two brands of whiskey sold at Heyuan’s Muse bar were knockoffs spiked with methanol. Investigators found that the two brands had also been sold in other regions including Henan, Hainan and Guizhou provinces — mostly to bars.

Methanol consumption can cause damage to the nervous system and lead to loss of sight and possibly death, according to medical professionals.

All 22 sickened drinkers were treated at Heyuan People’s Hospital, including four who were treated for serious conditions, according to the hospital.

The two contaminated alcohol brands were registered by Penglai Weiyade Wine, a winery based in Yantai in the eastern province of Shandong, according to the Guangdong Food and Drug Administration.

However Muse’s owner failed to provide proper invoices that documented details about the bar’s suppliers, leading investigators to believe the products are counterfeit, according to the provincial food safety regulator.

The owner of the bar and three other employees were detained by police over the alleged sale of poisonous and harmful food.

Regional authorities also launched a province-wide investigation of 37 alcohol manufacturers, 1,317 wine and liquor wholesalers and more than 800 bars and KTV establishments, but didn’t uncover any more than the 791 bottles of knockoff booze confiscated from Muse, according to the provincial government.