By Sun Lizhao and Han Wei 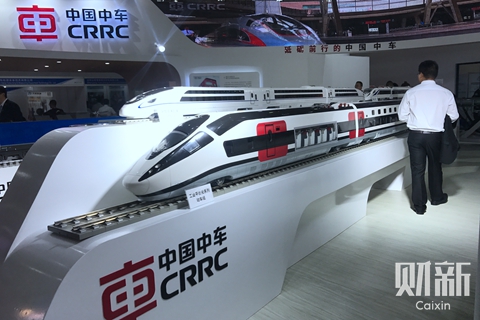 CRRC expects its overseas orders will reach just half of 2017 goal. Photo:Caixin

China’s top state-owned train maker CRRC Corp. expects orders from foreign customers to total no more than $4.5 billion this year, half the $9 billion target set at the beginning of 2017.

This year's weak performance might influence the company's plan to set up more branches overseas, a person close to the company said. The CRRC’s newly established subsidiaries in North America and South America both missed their sales targets, the source said.

In May, CRRC set up its first overseas branch in Canada to mark the Chinese railroad vehicle and equipment manufacturer’s move to expand foreign sales. A company source told Caixin at that time that CRRC planned to open 11 subsidiaries to cover markets in South America, Africa, Europe, Russia, Australia and Southeast Asia.

But in an interim report in August, the company warned of risks associated with overseas sales reflecting rising protectionist sentiment and uncertainties in the global market.

Sources close to the company told Caixin that CRRC recently reshuffled the leadership of its overseas operations, assigning Vice President Lou Qiliang to head the global business, replacing She Weiping. She, also a vice president of CRRC who oversaw the international unit since June 2015, will be in charge of after-sale business in the domestic market.

As orders slowed, disagreements grew between CRRC’s headquarters and subsidiaries on overseas operations, sources close to the company said.

A source from CRRC Dalian Co., in the northern province of Liaoning, said headquarters now designates which subsidiaries can bid for specific contracts, reversing the previous practice in which all units were free to bid on overseas deals. The change triggered concerns whether all subsidiaries would be fairly treated, the source said.

Zhao Jian, a transportation management professor at Beijing Jiaotong University, said the clashes between CRRC’s subsidiaries and headquarters highlighted insufficient internal integration after the establishment of CRRC two years ago.

CRRC was created in June 2015 through the merger of two industry leaders, CSR Corp. and CNR Corp., as part of a national campaign to consolidate state-owned enterprises. The combination involved 46 wholly owned or controlled subsidiaries and 170,000 employees. The new company is the world’s largest rail-equipment maker.

An employee at CRRC Qingdao Sifang Co. said that after those sanctions, most subsidiaries stopped moving privately in foreign deals without headquarters approval, which avoided internal competition but also reduced CRRC’s chance to win bids.

Jia Shunping, another professor at Beijing Jiaotong University, said that as CRRC headquarters asserts its authority over international deals, it is important to work out a transparent and efficient internal mechanism that can be fairly applied to all subsidiaries.

A source from the overseas business division at CRRC headquarters said that in addition to the internal tension, CRRC’s overseas performance has been affected by over-optimism and growing competition.

Despite major deals inked in the first half including supplying 64 rail cars to Los Angeles, 45 subway cars to Philadelphia and a $51 million train supply deal with Montreal, CRRC has fallen far short to its annual goal. It is partly because the company set this year’s sales target too high, said the source.

The optimism was fueled by last year’s better-than-expected performance, including a $1.3 billion subway vehicle contract in Chicago and a $545 million deal to build 65 subway cars for Australia, he said.

However, this year CRRC lost out to rivals on major bids including a New York subway project and a high-speed rail project in Britain.

“After the failures in New York and Britain, CRRC has to reassess its overseas strategy,” the source said.

In September, Germany’s Siemens AG and France’s Alstom SA announced a merger of their rail-equipment operations to create a new European champion to challenge CRRC.