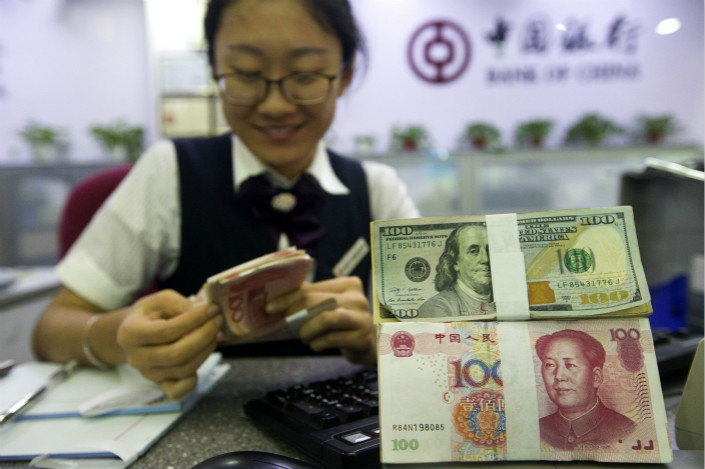 Before 2015, China had $4 trillion in forex reserves, which many criticized as being too much. However, an ensuing massive capital flight caused the reserves to plunge to below $3 trillion, leading many institutions to short the yuan. Photo: Visual China

Once again, the debate has heated up over who — the central bank or the finance ministry — should be the primary manager of China’s forex reserves.

One view is that our external reserves, now managed by the central bank, are closely connected with inflation, financial risk and even speculative behavior. They suggest forex reserves should be managed by both the central bank and the finance ministry, with the ministry taking the lead.

This is a huge issue with broad, long-term implications. This article will try to analyze this view from several perspectives: monetary policy independence, financial risk prevention, international experience and the structure of China’s financial system.

Firstly, the proponents argued, the finance ministry can issue sovereign bonds to raise foreign currencies for the external reserves, leaving domestic money supply unchanged. But in fact, the central bank also has the capability to leave the money supply unchanged, such as by increasing the reserve requirement ratio for banks or by issuing commercial paper. Up until 2015, the central bank did not use any of these tools, because it actually wanted to expand the money supply, not because it could not keep it unchanged.

Secondly, an important role of the external reserves is to maintain a country’s balance of payments, in order to keep its exchange rate steady. Reserves cushion a country, especially developing markets, from external shocks. Large forex reserves helped China weather the Asian financial crisis in 1997; after that, other East Asian countries followed and boosted their reserves. In addition to managing the balance of payments, studies also found that reserves stabilize a financial system. The IMF said, for emerging countries, strong forex reserves can hedge against domestic macroeconomic risks and improve people’s welfare.

Because forex reserves are tools to manage crises, it follows that security and liquidity must be the top priorities in managing the reserves. As high liquidity implies low returns and vice versa, chasing after high returns should not be a priority. We cannot have it both ways.

However, if forex reserves drop below their “threshold level” — usually during a balance-of-payments or currency crisis — the balance of payments surplus could then be reinvested for higher yields.

Thirdly, as a precaution against sudden, short-term capital outflows and a subsequent capital-account crisis, forex reserves should be large enough to cover three to four months of imports, or to repay short-term debts due within a year, or 9% of a country’s GDP. Although these metrics are only rules of thumb, and vary from country to country. There is no universal or scientific standard for judging whether forex reserves are sufficient.

Before 2015, China’s forex reserves had once spiked to $4 trillion, which many criticized as being too much. However, an ensuing massive capital flight caused the reserves to plunge to below $3 trillion, leading many institutions to short the Chinese yuan. The lesson here is that it is easy for forex reserves to dwindle faster than we expect when a crisis looms, so it is premature and imprudent to argue that China’s external reserves are too large.

Fourthly, as Zhou Xiaochuan, governor of the People’s Bank of China, has said: “Financial risks must be prevented and controlled palliatively at their roots. And we should play both offense and defense.”

He also said: “While we guard against ‘black swan’ events, we must do the same to ‘gray rhino’ risks.”

Prevention is the right attitude while the international financial system is facing ‘gray rhino’ risks. Although it is difficult to judge whether our external reserves are of the right size, the best strategy is keeping the reserves safe and liquid.

Among foreign assets, U.S. Treasuries are very safe and highly liquid. Moreover, since U.S. economy is closely connected with China’s trade, capital flows and exchange-rate volatility, investing reserve assets in U.S. Treasuries helps China hedge against risks. This is the reason why Chinese forex reserves are mostly in U.S. Treasuries.

Hypothetically, if we invest reserves in high-yield, high-risk, long-duration equity assets, and if a balance-of-payments crisis occurs, it will be very costly and difficult for us to convert these assets into cash in a timely manner.

Some people have proposed splitting up our external reserves into different “funds,” some of which could be managed by the finance ministry and invest in higher-yield assets. The idea looks wonderful on the surface, but it might be difficult to execute. High risks go hand in hand with high returns.

People are always forgetful. When things are getting better, people forget how sufficiently large forex reserves have helped stabilize Chinese economy since 2015. If the external reserves are taken away from the central bank, how will it fend off balance-of-payments risks? How will it contain massive capital flight? How will it maintain a stable exchange rate? Moreover, the U.S. Federal Reserve is increasing interest rates while shrinking its balance sheet. The resulting pressure on capital flows and exchange rates globally should not be underestimated.

Fifthly, at present, the forex reserves of most countries are administered by the central bank. Only the United States, Britain and Japan manage their reserves by the finance ministry. But these countries have their own reasons for doing so.

Both the U.S. dollar and the British pound are international currencies, and they do not need to deal with the balance of payments, and their exchange rates float freely. Therefore, it does not matter whether the forex reserves are held and managed by the central bank.

Therefore, each country follows its own logic, and cannot be completely copied by China.

If the Japanese model is copied to China, we should also let the Ministry of Finance formulate and implement exchange rate policies, including the monetary and financial regulatory functions. Is this what we want?

As Chinese government debt has risen rapidly, the risk of local financing platforms has not subsided. The Ministry of Finance has been purchasing foreign currencies by issuing sovereign bonds to expand the government’s balance sheet, leading some to argue that an increase it the national debt and stronger external reserves are two sides of the same coin. In accounting terms, when there are assets, there are liabilities. So, how can we say as long as assets grow with liabilities, the risk of the balance sheet won’t rise? Moreover, if the finance ministry takes over the forex reserves and seeks higher returns, risks are bound to increase.

Sixthly, strong external reserves are the effect of the problems with our financial system, not its causes.

Professor Song Zheng from Fudan University won the Sun Yefang Economics Prize with his essay “Growth in Chinese Style” published in The American Economic Review in 2011. Song refuted a widely held notion that Chinese government was manipulating the country’s exchange rate. He argued, based on evidence, the accumulation of forex reserves was a natural result of the country’s reorganization of resources and the lagging development of its financial market. As banks prefer to lend to state-owned enterprises, private companies are bound to turn to their own retained earnings, savings or other unconventional channels, substantially increasing the savings level of the population. At the same time, due to the declining share of state-owned economy since 1992, the “effective” demand for loans has shrunk sharply, thus creating a sustained gap between deposits and loans since 1994. Funds in China’s banking industry are largely spent on lending or buying foreign assets. Therefore, foreign assets appear the most logical place for the surplus.

The real reasons are, firstly, the objectives of the market and the monetary policy are often incompatible. Secondly, credit is not efficiently allocated, and usually goes to low-efficiency sectors such as local government financing vehicles, state-owned enterprises or even big firms. Thirdly, the development of shadow banking weakens the central bank’s ability to adjust policies during counter-cycles. Fourthly, regulations have failed to keep up with financial innovations, leading to a regulatory vacuum, fraud, arbitrages, and so on.

For such a large and open economy like China, the importance of forex reserves is self-evident. This ensures an orderly and steady opening up, and fends off attacks. At present, the U.S. Federal Reserve is gradually raising interest rates and shrinking its balance sheet, so dollars will be finding their way back to the U.S. We should not be shortsighted and chase near-term gains.

Needless to say, there are problems with China’s financial system. However, we must grasp the big picture, and avoid the piecemeal approach. The key is to deepen institutional reform, to implement the outcomes of the 19th National Congress and National Financial Work Conference, to strengthen the Party’s leadership over the financial industry, to balance stability with progress, to serve the real economy while keeping financial risk under control. A modern financial regulatory framework is the cornerstone of safeguarding national financial security.

Yao Qian is the director of the Digital Currency Research Institute at the People’s Bank of China.