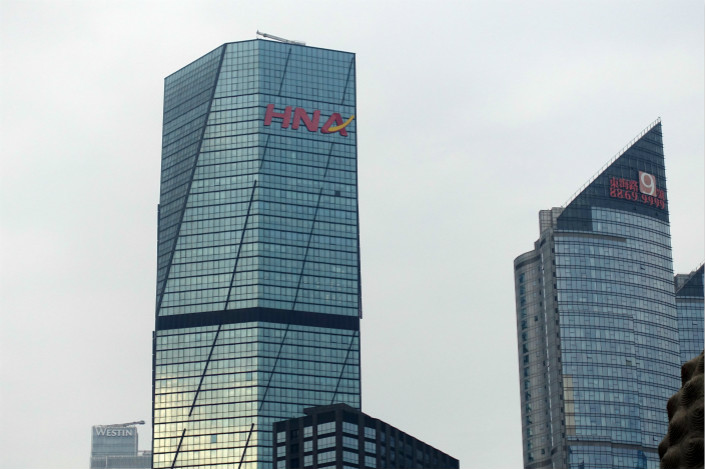 Earlier this year, HNA Group put the brakes on its $25 billion overseas shopping spree after Beijing tightened scrutiny on overseas acquisitions due to concerns about capital flight and debt. Photo: Visual China

HNA Group, known for its splashy overseas acquisitions over the past two years or so, is trying to defuse market concerns over its debt pile and liquidity.

The Chinese conglomerate said in a statement on Thursday that its deputy chairman and deputy financial officer had met with representatives from eight policy and commercial banks to discuss the company’s credit facility for 2018.

The talk came after Lucky Airlines, one of HNA’s units, sold a bond at the highest coupon rate in the unit’s history, as well as amid media reports that said the group and some of its units have delayed loan or fee payments recently.

“Representatives from those banks said they would continuously support the healthy and sound development of HNA Group in 2018,” the statement said.

Earlier this year, the company put the brakes on its overseas shopping spree after Beijing tightened scrutiny, including asking banks to lend less or more carefully to these companies, amid concerns over capital flight and debt risk.

HNA had been on a global acquisition shopping spree since 2015, spending more than $25 billion on a range of assets. Since then, the company has expanded from an airline operator to a tourism and financial conglomerate. The company scooped up stakes in Deutsche Bank AG, Hilton Worldwide Holdings Inc. and aircraft-leasing specialist Avolon Holdings Ltd.

Caixin reported Tuesday that some of China’s most aggressive buyers of foreign assets, including HNA Group, are racing to raise capital by issuing bonds and selling assets amid liquidity pressure.

Lucky Airlines recently sold 75.7 million yuan ($11.5 million) in bonds at a coupon rate of 8.2%, the highest coupon rate in the history of the company, a rate high enough to signal the company is having trouble raising money.

Sources also told Caixin that HNA Group delayed some scheduled loan repayments due several months ago, while several of its subsidiary airlines have also delayed payments on their flight-leasing fees.

Amid market concerns, HNA said Wednesday that it still has 310 billion yuan in credit lines that it hasn’t tapped — out of a total of 800 billion yuan.