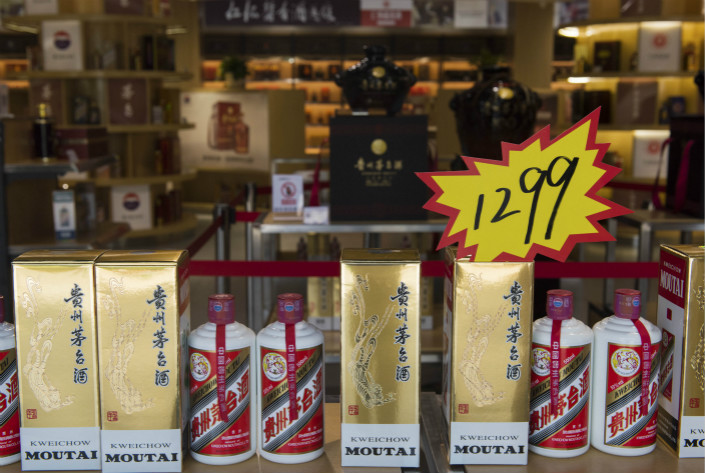 State-owned Moutai will increase factory-gate prices across its line of “baijiu” products by 9% to 25%, the company’s chairman Yuan Renguo said at a meeting on Thursday.

Moutai produced 42,700 tons of basic liquor — which is aged and processed to create products of different qualities — in 2017, 9% more than in 2016, the company said in a separate announcement on Thursday. It estimates that sales of Moutai products grew 34% from 2016 to 2017, and predicts a 58% profit increase this year.

After Thursday’s announcement, Moutai’s Shanghai-listed shares surged, reaching a record high of 726.50 yuan per share on Friday, before falling slightly by midday.

Yuan said the higher factory-gate prices, which will come into effect on the first day of 2018, will not be accompanied by a similar retail price hike.

Moutai’s retail price has been growing since late 2016, even before the announcement of the impending factory-price increases, which are the first since April 2012. Moutai’s signature Feitian liquor retailed for around 800 yuan a bottle in early 2016, but the price hit 1,300 yuan in some regions by April, primarily due to hoarding and scalping by middlemen.

Earlier this year, Moutai’s General Manager Li Baofang held a meeting with retailers where he scolded them for causing Feitian’s price surge, and warned that “whoever causes chaos in the market is smashing their own rice bowl.” At the meeting, the company demanded a written promise from distributors against unauthorized retail price increases.

But the market price of Feitian has continued to rise, driven by supply shortages and increasing demand from China’s booming middle class, reaching 1,600 yuan. Industry insiders expect it to break the 2000-yuan barrier in 2018.

Moutai’s online store has not received any new stock of Feitian in over two months. To meet rising demand in 2017, Moutai increased production of the liquor by 3,000 tons, up from 26,000 tons in 2016. But that has been barely enough to keep up with demand in 2017, according to a report by Huachuang Securities.

On Dec. 6, Moutai announced it plans to invest around 3.5 billion yuan to increase its production capacity.