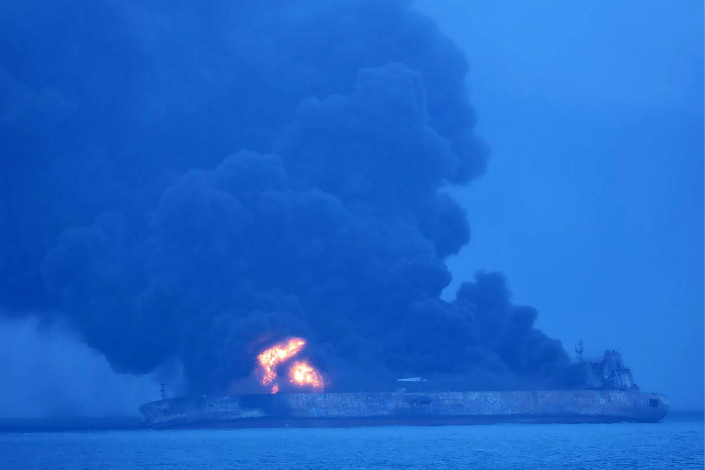 The oil tanker Sanchi burns off the Chinese coast after colliding with a cargo ship on Saturday. Photo: Visual China

All 32 crew members on board a Panama-flagged oil tanker were still missing Monday after the vessel collided with a cargo ship off the coast of Shanghai over the weekend.

The oil tanker Sanchi, en route from Iran to South Korea, caught fire after it rammed into the Hong Kong-flagged CF Crystal about 160 nautical miles (184 miles) east of the Yangtze River estuary at 7:50 p.m. Saturday, according to zjol.com.cn, a state-run news portal affiliated with the Zhejiang provincial government.

Quoting the Zhejiang Maritime Safety Administration, the website reported Sunday that the cargo ship also was damaged, but all of its 21 crew were safely taken to a fishing vessel that was in the area.

The Ministry of Transport ordered provincial maritime police, fire brigade and salvage teams to the area to deal with the fire and contamination after an oil spill was spotted, but it is not clear how extensive the pollution was.

South Korea also sent a ship and a helicopter to the site at the request of the China Maritime Search & Rescue Center, an agency affiliated with China’s Transport Ministry.