Controversial Prosecutor Under Bo Xilai Back in Limelight 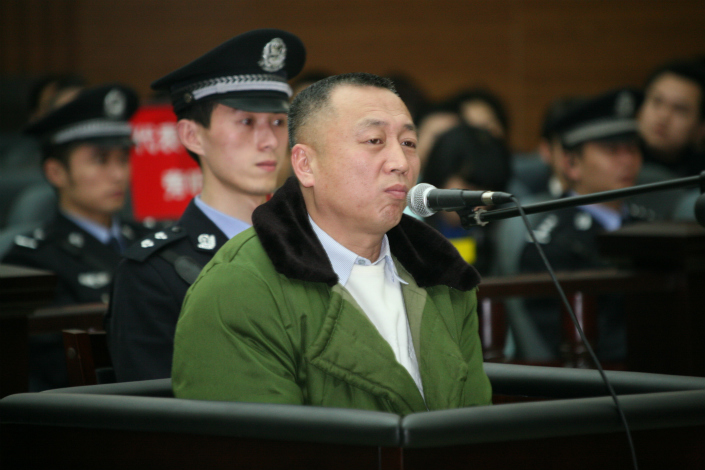 Veteran Beijing lawyer Li Zhuang stands trial in Chongqing in February 2010 on charges of falsifying evidence. Yao Ning was the prosecutor at this trial, however it was later discovered that allegations of soliciting a sex worker she made against Li were untrue. Photo: Visual China

A controversial prosecutor who rose to fame under disgraced party heavyweight Bo Xilai is back in the limelight for refusing to come to grips with her role in an earlier campaign to crack down on political rivals, orchestrated by Bo and his police chief.

Yao Ning, 40, was involved in nearly half of the more than 20 cases that charged over three hundred individuals — some innocent — of gang violence in the southwestern municipality of Chongqing, where Bo served as the party secretary from 2007 to 2012. Those targeted included police officers, public servants and business people critical of Bo’s rule.

Yao has not been implicated with miscarriage of justice in these cases and was allowed to work at the municipal prosecutor’s office as a division head until her resignation in early 2017.

But, she has come under public scrutiny after posting a statement on her social media account on WeChat on Dec. 28, commenting — for the first time — on her controversial handling of a 2009 case linked to a veteran Beijing lawyer, Li Zhuang.

Her post, called “I Need Only to Put My Heart Where It Was,” has drawn criticism for her failure to offer a candid explanation or an apology for her role during the purge, which eventually led to the fall of Bo and his police chief Wang Lijun.

Bo, once a rising political star with charisma and pedigree, was sentenced to life in prison in September 2013 for corruption and abuse of power.

Wang Lijun, at the forefront of Bo’s campaign against organized crime, was sentenced to 15 years in jail for bending the law for personal gain and abuse of power following his botched attempt to seek asylum at the U.S. Consulate in Chengdu. By that time, Li had fallen out with his superior over an investigation into the murder of a British national by Bo’s wife.

Yao’s letter comes at a time when the ruling Communist Party is trying to rid Chongqing of the “toxic legacy” left by Bo and his associates.

Inspectors from the party’s powerful Central Committee censured Chongqing’s local party authority last year, for not doing enough to tackle the “lingering influence” from corruption and attempts to undermine the judiciary during Bo’s rule of Chongqing.

Yao’s statement has triggered a public uproar because it is seen as an attempt to promote herself and the private practice she started after she left the government prosecutor’s office to join a law firm.

In a recent interview with Caixin, Yao dismissed the allegations. She said she left her government position at the beginning of 2017, but news of her resignation only broke in late December, after the city’s legislature released an official list on personnel changes.

“The news, which spread quickly, prompted some lawyers to put pressure on my law firm, demanding that they to fire me, because they said a law firm is not a place for ‘filth’ like me,” she said.

A Chinese university has also withdrawn an offer for a teaching job in the 11th hour, she said.

Yao became a star prosecutor in Chongqing, where she received accolades for her role in “a campaign to promote red songs and crack down on organized crimes.” The campaign was launched by Bo and his police chief.

Yao, Wang Li Jun and four other law enforcement officials were honored as “People’s Defenders” in 2010, during the heydays of Bo’s clampdown on alleged “gangsters.”

The campaign, dismissed by critics as a mafia-style cleanup of individuals who disapproved of Bo’s style of governance, also threatened lawyers who represented those targeted.

In one case in 2009, Yao accused lawyer Li Zhuang of soliciting prostitutes paid for by his clients. Li was a defense lawyer for Gong Gangmo, a Chongqing businessman charged with gang crimes.

That same year, Li was sentenced to 1 1/2 years in prison for falsification of evidence and obstructing testimony collection. Li maintains he is innocent, but didn’t appeal.

Yao served as a state prosecutor in Li’s case. It isn’t clear if Yao’s accusations had a bearing on Li’s sentence, but she admitted it was “unprofessional” to tarnish Li’s image with accusations that weren’t part of the official charges brought against him.

“I felt sorry for the harm my missteps caused Li Zhuang and his family, and that’s why I’ve kept silent in spite of the scolding and insults from him over the years,” she said.

Yao said in her statement that she is willing to offer Li an apology, but stopped short of acknowledging what led to her ascent in an era when justice was trampled upon under Bo’s iron-fisted rule.

Li Zhuang said he doesn’t need an apology, because he understands that she was “young, ambitious and hungry for recognition at the time,” and that she “wasn’t a bad prosecutor.”

“But one glance at the title of her article made me feel bad, even disturbed and uncomfortable, because it suggests that she would go about life as if nothing happened,” Li said. “I was asking myself why she didn’t show any remorse or even a bit of embarrassment.”

How Yao Ning has reacted is “particularly shocking” because she is “a living testament to how deep the toxic legacy of Bo Xilai and Wang Lijun has taken root with people like her — a problem that even the ruling Communist Party has noticed,” he said.

Bo’s campaign against organized crime in Chongqing undermined the justice system to such an extent it felt like one was “living in complete darkness,” Li said. “Many convictions didn’t follow due process and some people were even killed or left with permanent disabilities.”