By Xie Haitao and Wei Xiding 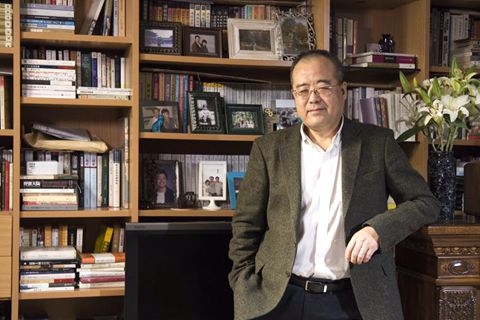 Liu Suli, founder of All Sages, one of the most popular independent bookstores in Beijing. Photo: Liu Suli

Liu Suli looks like a swordsman lost in a forest when he walks through bookshelves stacked with academic volumes and rare works on Chinese politics.

A “swordsman” in Chinese culture refers to someone with refined manners, who isn’t ruffled by mundane concerns and is brave enough to push the envelope. Running an independent bookstore in China requires all these characteristics, as well as a sharp eye for business.

Founded in 1993, Liu’s All Sages Bookstore (“Wansheng” bookstore) — a stone’s throw away from Peking University — has become an oasis for intellectual debate and cultural expression.

Liu, 57, is a high-school dropout from the northeastern province of Heilongjiang. He said he has “fought and sampled the taste of death” during the Cultural Revolution (1966-76), without elaborating. He entered Peking University once the national college entrance exam was resumed after a decade-long hiatus, when young people were sent to villages to work on collective farms and access to books, other than party-approved volumes, was limited.

“We were a generation starving for books,” Liu said. “I have no regrets other than not being able to read what I wanted, and this made me dream of opening a bookstore.”

After graduating from China University of Political Science and Law in 1986 with a master’s degree in political science, Liu started a printing business, but said his heart wasn’t in it. China’s book market, at the time, was monopolized by state-run chains like Xinhua Bookstore, leaving no space for dreamers like Liu.

However, as the country’s reform and opening up process picked up steam in the early 1990’s, authorities loosened their grip and a wave of independent bookstores to open up across China, including famous names such as Guolinfeng in Beijing, Sisyphus Bookstore in Guizhou, Jifeng in Shanghai and Xianfeng Bookstore in Nanjing.

Liu decided to open his first store near Sanyi Temple in Beijing on Oct. 31, 1993, which happened to be Halloween. He picked the Chinese word for Halloween, “Wansheng,” as the name of the store, because he happened to be born on the day associated with death, ghosts and skeletons.

But the Chinese characters in the name also mean “hundreds of thousands of saints,” and the store is widely known today All Saints Bookstore.

Only a handful of the independent bookstores opened in the early 1990s have stood the test of time. Many were forced to shut down amid competition from online booksellers and rising rents in big cities.

All Sages has managed to survive by shutting down branches, shrinking the size of its flagship store and diversifying its revenue streams. The Thinkers’ Cafe, which is part of the store, has become a regular watering hole for both academics and students from Beijing’s elite universities. The store also organizes book readings and panel discussions, which are usually sold out, days in advance.

Liu is also experimenting with featuring his books on a popular podcast app, Dedao, with over 5.5 million users.

An avid reader, Liu has also tried to beat the competition by creating an eclectic collection, which includes rare volumes on philosophy, history, political science and books that are out of print.

Xu Youyu, a philosophy professor from the Chinese Academy of Social Sciences, who has been a long-term patron of the bookstore, said Liu usually scans more than 1,300 titles every month to select ones to sell.

Caixin spoke to Liu Suli about the challenges facing independent bookstore owners in a digital age and his mantra for success. The following are edited excerpts of the Chinese language interview.

Caixin: What did you read during the Cultural Revolution?

Liu Shuli: We were a generation starving for books. No one in my family advocated reading. My siblings didn’t read and they teased me as a “fake reader,” because I read books on Marxism, which I didn’t understand. But these were the only ones available at home. I used to go to Xinhua Bookstore and line up overnight when new books were released after 1977, but they were all sold out before I got a chance to buy one. Back then, people were buying books as if they were buying gold. I also remember reading books taken from my sister’s roommate without permission when she was out working. I have no regrets other than not being able to read what I wanted, and this made me dream of opening a bookstore one day.

How did the resumption of the college entrance exam in 1977 change your life?

I took the exam in 1978, but scored three points less than the cutoff mark for university entrance. So I returned to No. 1 Middle School in Hulin, Heilongjiang province, and took the exam again in 1979. I was sick when I sat for the exam, so I didn’t expect to get into a decent college. But my grades were good enough to get into Peking University. The early 1980s was a period of “enlightenment” for Chinese society. I read (Chinese) literary magazines such as Dushu, which had progressive ideas. I also read biographies of great figures such as Churchill; I read history books including “The Rise and Fall of the Third Reich” and books on pedagogy and psychology. I kept on reading as if I was swallowing all the books even though I couldn’t understand some or remember everything I read.

How has your bookstore evolved over time?

I rented a store near Sanyi Temple in May 1993 and opened my bookstore on Oct. 31, 1993, which was Halloween. The store featured books on academic research and progressive ideas. I was able to buy books directly from publishers, which allowed me to offer 8,200 different titles in the first year. But, I suffered after rent was hiked suddenly from 70,000 yuan ($11,116) to 230,000 yuan in the second year.

Later, we relocated to a traditional courtyard house on Chengfu Street. I lost my senses seeing the success of the store on Chengfu Street and decided to expand. After succeeding in the mail-ordering business, we established several companies to distribute books. We aspired to be the one of the biggest book distribution services in China’s private book industry. But, this business failed because we couldn’t convince enough publishers to enroll or offer discounts. We made a net loss of 2.97 million yuan. It wasn’t until 2007 that we managed to repay all the debts.

In 1999, All Sages Bookstore had its darkest moment. We had to shift to a location near Haidian Stadium after the old alleyway, or “hutong,” which contained Chengfu Street, was demolished. Then we made a comeback in November 2001 and reopened an 870-square-meter bookstore in Chengfu Street (close to the previous demolished location). The store also included the Thinkers’ Cafe.

I would like to share with you two brilliant moments at the cafe. Once, someone was arguing about a theory in the coffee shop and needed evidence to support his argument. He ran into the bookstore and bought a book with the evidence he needed. The other one was an online review written by a reader. “At the cafe, you are able to find solutions to China’s problems on your way to the washroom because everyone is talking about different issues from environmental protection to constitutional reform,” it said.

How does All Sages deal with competition from online booksellers?

I realized the era of online bookstores was dawning in 2001. That’s when I started to reduce the size of our flagship store and close the smaller branches. Independent bookstore owners who continued to expand their businesses were the ones who lost to competition.