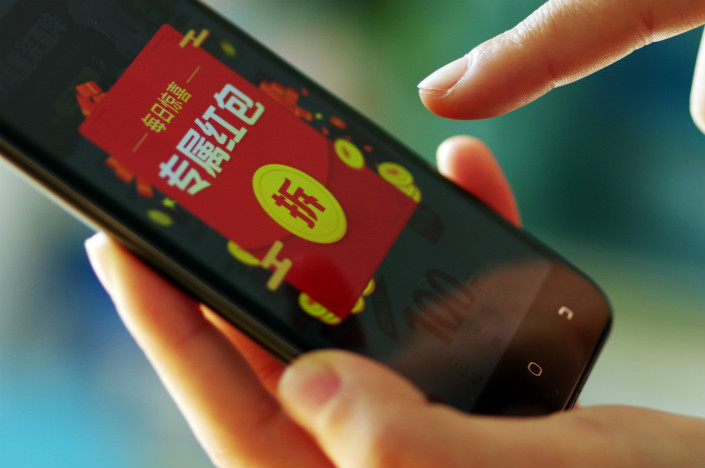 Over the last few years, a centuries-old tradition during the Lunar New Year — children receiving red envelopes stuffed with cash from older relatives — has been brought increasingly online by a pair of internet giants seeking to promote digital payments.

This year, ahead of the weeklong holiday that begins next week, a third competitor, bank-card services provider China UnionPay, is hoping to break the duopoly of Tencent Holdings Ltd. and Alibaba Group Holding Ltd.

At the same time, Tencent and Alibaba have begun encouraging more offline and physical engagement in the money-giving custom this holiday season.

The tradition of giving red envelopes, or “hongbao,” saw its first update for the digital era in 2014, when Tencent started allowing users of its hugely popular messaging app, WeChat, to send virtual red envelopes to each other.

During the last few Lunar New Years, Alipay and WeChat have rolled out gimmicks and campaigns to attract users, including spending billions of dollars gifting digital red envelopes to users and sponsoring China’s Spring Festival Gala, an annual variety show televised by state broadcaster CCTV on the eve of the holiday.

This year, government-backed China UnionPay is promoting its own mobile payment app that just launched in December, offering red envelopes of as much as 2,018 yuan ($319) for each user. The campaign will last until March 2.

As it did last year, Tencent is using its QQ instant messaging app as its front line in the red-envelope wars this year, eschewing its better-known WeChat app.

But the company has introduced a new hongbao rule: Those who walk more, according to their phones’ tracking records, will have better chances of splitting the 200 million yuan in envelopes that Tencent plans to allocate to users during the Lunar New Year.

The rule this year “encourages everyone to put down their phone and spend more time with family and friends,” Tencent Vice President Yin Yu said.

Alipay has raised its total hongbao prize money to 500 million yuan from 200 million yuan in 2017. And the ways to increase the possibility of getting a part of the money include walking more and taking a photo of people posing in certain ways.

And renowned companies, including Ferrari, Burberry, Starbucks and Coca-Cola, have joined the game to increase their brands’ presence during the Lunar New Year, partnering with Alipay and Tencent to offer their branded prizes together with red envelopes.