By Liu Shuangshuang and Wei Xiding 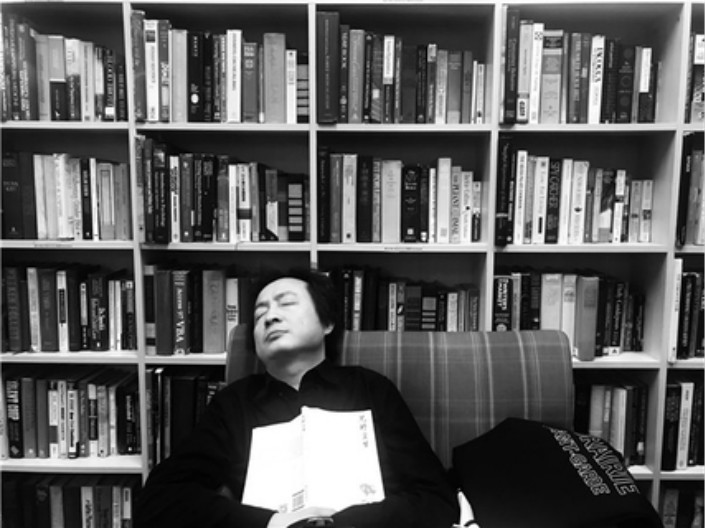 Ai Guozhu, more popularly known by his pen name, A Yi, dozes off at a Beijing bookstore. A Yi describes himself as “a cruel writer” who wants to explore how “merciless” humans can be. Photo: Yilin Press

Writer Ai Guozhu, who is popularly known by his pen name, A Yi, is obsessed with books and always carries one with him wherever he goes.

“The Big Book of Pain: Torture and Punishment Through History” was the volume he brought on the day of our interview, and nearly half the pages were marked with yellow sticky notes full of his comments.

A Yi describes himself as “a cruel writer” who wants to explore how “merciless” humans can be. As a result, murder, crime, and death are the major themes of his works.

In January, he published his first full-length novel, “Wake Me Up at Nine in the Morning.” The story describes the spectacular funeral of a village bully named Hongyang who got drunk and asked his lover to wake him up at 9 the next day, when he was found dead. His relatives and friends who gathered for his funeral shared tales of his roller-coaster life.

The story was inspired by a real-life tale told by writer Fang Hui in 2012. In her grandfather’s village, after the tomb of a man who died of alcoholism was excavated, people were shocked to find a few of the dead man’s finger bones jutting out of a corner of the edge of the coffin lid, as if he had woken up and tried to open the coffin.

A Yi, a former policeman, said stories of this kind fascinated him.

The 42-year-old, who shot to fame for his short stories, also said that “Wake Me Up at Nine in the Morning,” his first full-length novel, will also be his last, for he was drained of almost all his strength while pursuing every detail in pursuit of perfection.

He also complains that he has lost his “muse.”

“In the past, my hometown, Aiwan in Ruichang, was my source of inspiration, but I have drained everything from it. Writing is like exploiting a mine, but now my mine is in ruins,” he moaned.

He also said he regrets spending only four hours a day writing while spending another 16 hours “thinking and brooding” while completing his latest book.

“I collected information online, put on cloth shoes and walked back and forth just to find a way to depict the way one walks. I was so addicted to getting it right.”

His meticulous eye for detail has helped him clinch several prestigious awards, including the People’s Literature prize for novellas, the Pu Songling short-story award, and the Lin Jinlan short-story award. The famous Chinese poet Beidao once called him “one of the most excellent contemporary Chinese writers, with as much passion and loyalty to composing fiction that is true to life.”

A Yi was born in Ruichang, Jiangxi province, and worked as a police officer, personal assistant and a journal editor before making the foray into writing. “Writing has always been a dream for me,” he said. “I didn’t seriously make up my mind to become a writer until I was 32.” Now he is the writer in residence at the One Way Street Library in Beijing and meets readers once every two months.

Caixin spoke to A Yi about his writing process and his future plans. The following is a translated excerpt of the Chinese-language interview.

Caixin: Your latest book has an interesting structure with a stand-alone mini-novella inserted into a longer work. Why this design?

A Yi: In the first place, I planned to write one-tenth of what I ended up writing and to focus only on the main character Hongyang’s betrayal of his friend Feiyan.

However, when I started to write, I had a feeling that the victim, Feiyan, was desperate to express his inner world to someone, as many escaped convicts would do.

There are no rigid rules about how to structure a novel, so later, I tried to expand the story a bit. I’ve intentionally distinguished different parts with different styles of writing and fonts.

Now it looks as if it’s written by two different people and bound together as if two dead bodies had been sewn into one.

Do you usually take such detours when you write?

There are many weird choices in the process of writing. For example, in William Faulkner’s “The Sound and the Fury,” there are four characters talking in four different perspectives. The old nanny linked all the others’ descriptions and made a narration of the history of a big family. Many readers thought her perspective was a deliberate design since it was the most absurd. However, according to Faulkner, he had planned to use only one perspective, which expanded into four until he was satisfied.

It’s important to leave space for unexpected developments as a writer, but we also need a framework to decide what to include and reject.

Do you think writers should stick only to subjects they are familiar with?

Writers need to know what their limits are and find a solid base. This can be built on what they are familiar with, which is why Alai, the winner of Mao Dun Literature Prize, and Mo Yan, the first Chinese to win the Nobel Prize winner in literature, often return to their hometowns to see how people’s lives have changed.

Another good example is award-winning film director Jia Zhangke. After leaving his hometown in Fenyang, Shanxi province, his films have seemed rootless and without a soul, and are less stunning than his trilogy featuring stories of his hometown. I heard that he has recently moved back to Linfen (in Shanxi), which I guess is both because Linfen needs him and he can progress only by absorbing (intellectual) nutrients in his hometown.

I am also facing the same problem for I have no idea where my base is. In the past, my hometown, Aiwan in Ruichang, was my source of inspiration, but I have drained everything from it. Writing is like exploiting a mine, but now my mine is in ruins. Some better writers know how to exploit their “muse” in a sustainable way, which means they have stable access to fresh material. I feel I have nothing to write in the coming year or two, but I continue to take notes.

What inspired your past works?

I drew inspiration from rural areas in my hometown. All my past characters have had some correlation to a person or people I’ve met in real life. I believe fiction should be based on reality. But now I’ve entered a real imaginary world, entirely made up of myself without any real-life prototypes to refer to.

In this case, I need to first accept this setback and try hard to find or create a new literary voice. Many middle-aged writers stop altogether because they’ve run out of fuel.

For me, I felt grateful that I started writing in my 30s after learning many writing techniques by reading voraciously. If I had started to write in my 20s, I would have wasted my muse.

I was ignorant when I was 20 years old. So are many other young writers nowadays, and I feel they are squandering their mine of ideas.

What stories do you plan to write in future?

I am interested in mysticism and I have written some short stories exploring death and how it affects life. I will continue to write on this theme.

Another theme is the rise of machines and its impact on humanity. As machines are able to interview, write articles, and so forth, will human beings be marginalized?