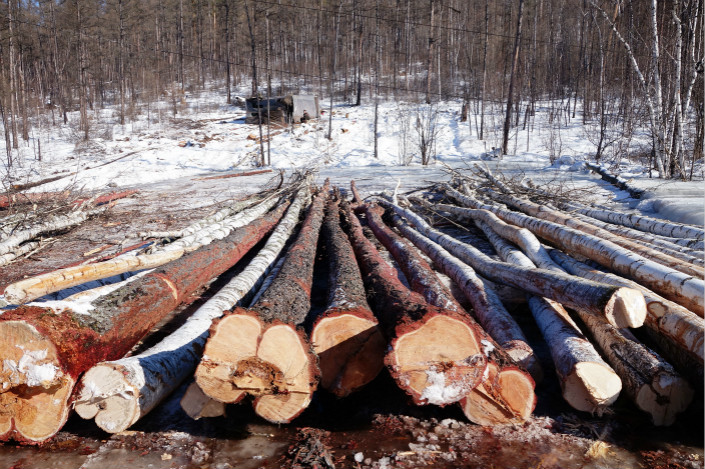 Timber is stacked at a lumber yard in Hulunbuir, Inner Mongolia in 2015. Photo: VCG

China has taken major steps to ban its ivory trade and curb illegal logging, but the country still has some way to go in enforcing wildlife protection policies, a senior State Forestry Administration official said.

China put in place a full ban on the ivory trade at the end of 2017, but it still needs to increase its enforcement efforts, Liu Dongsheng, the deputy director of the Forestry Administration, told Caixin at the ongoing “Two Sessions” meetings of China’s legislature.

Similarly, while “China’s international image is improving in the fields of logging safety, legal certification, and forest certification,” these improvements are still in the “initial stages,” Liu said.

“One of the main concerns in illegally logging is that Chinese enterprises go abroad to develop resources,” Liu added. “There are indeed many enterprises 'setting out,’ especially to Russia, Africa, and Southeast Asia. Some companies don’t comply with local laws and regulations, and engage in some illegal activities. But on the whole these make up a very small proportion.”

However, Liu also said that many people outside China who criticize the country for its wildlife conservation practices do so despite “not understanding China’s situation.”

Liu’s remarks come days after a study published by international wildlife trafficking watchdog TRAFFIC said that exports of protected species from Africa to Asia, including the Chinese mainland and Hong Kong, rose significantly in the decade after 2006.

The Chinese mainland and Hong Kong were among the largest importers of African plant species listed as protected in the Convention on International Trade in Endangered Species of Wild Fauna and Flora from 2006 to 2015. China accounted for almost all exports of African teak and African cherry from Central Africa during this period.