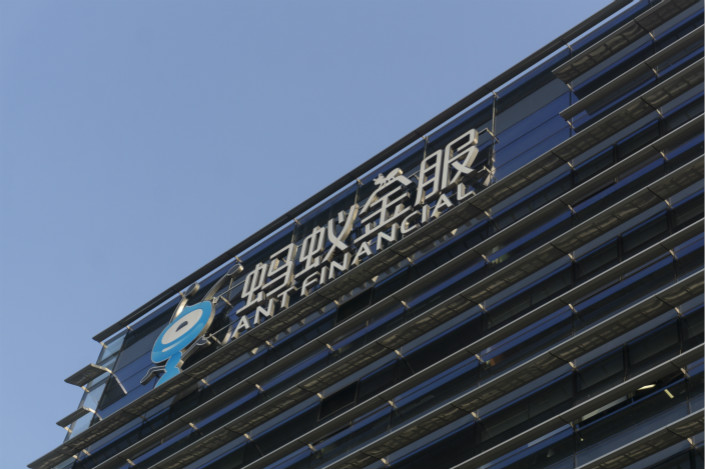 The revolving door from regulator to industry has some questioning whether there has been excessive accumulation of power within enterprises such as Ant Financial.

At least four former employees of the People’s Bank of China (PBOC) and one former employee of the China Securities Regulatory Commission (CSRC) are now working at Ant Financial, Caixin has found.

Liang left his post at the financial stability bureau in January 2017. He then joined the National Association of Financial Market Institutional Investors’ debt section as deputy secretary-general, but left that position in January. “He has not been in charge of any particular department or operation, the post was simply a “transitional role,” a person from the association told Caixin.

Liang Shidong first cut his teeth at China Construction Bank, where he quickly rose through the ranks to become a senior manager in the risk management department. In April 2011, he was appointed the deputy director of the PBOC’s financial stability bureau, responsible for risk management and stress testing. He was 34 years old at the time.

In recent years, with the rise of internet finance, it has become commonplace for people at traditional financial institutions and government agencies to make the career jump to internet giants such as Baidu, Alibaba and Tencent.

Sun Tao, who previously worked in the PBOC’s international department as well as its financial stability bureau, joined Ant Financial in late 2015 as a senior director in the strategy department.

Wang Zuogang, once the head of a division responsible for monetary policy, joined Alipay in March 2016 to be director of public affairs. He was a long-time civil servant, having spent 14 years at the PBOC.

In a previous role, Li Mingkai, Ant Financial’s president of Beijing affairs, was on staff at the PBOC’s science and technology department. He worked at the PBOC for nearly a decade.

While regulators’ professional knowledge can help enhance the overall understanding of financial risks at the institutions they join, there is also a risk of regulatory capture as their loyalties shift to protecting the interests of their new employers.

“I believe that most government employees go to these internet companies because they cannot achieve their own aspirations within the system,” a source from the Ministry of Public Security told Caixin.

By law, civil servants that resign or retire are not permitted to be employed by companies or other for-profit organizations directly related to their former positions for three years if they were in positions of leadership, or two years for other positions.

In practice, there are many loopholes to exploit.

Banking regulators, can for example be “appointed” or “recommended” to a new job as an “internal transfer” to skirt the required three-year waiting period.

Civil servants can also use the special channel of assuming the position of inspector at a financial institution to get around the waiting period, a practice that is especially common in the mutual fund industry.

Calls to close or at least increase restrictions on revolving doors have grown louder in recent months.

In February, a commentary published in the official People’s Daily highlighted a series of shortcomings that have often aligned officials’ interests with those of the regulated rather than the regulator.

Pointing to a series of scandals that had exposed complicity between officials and the institutions punished for misconduct, the commentary called for dismantling the revolving door between financial institutions and regulatory bodies, and preventing their interests from becoming entwined.