Opinion: Can Trump Use Student Visas as a Bargaining Chip Against China? 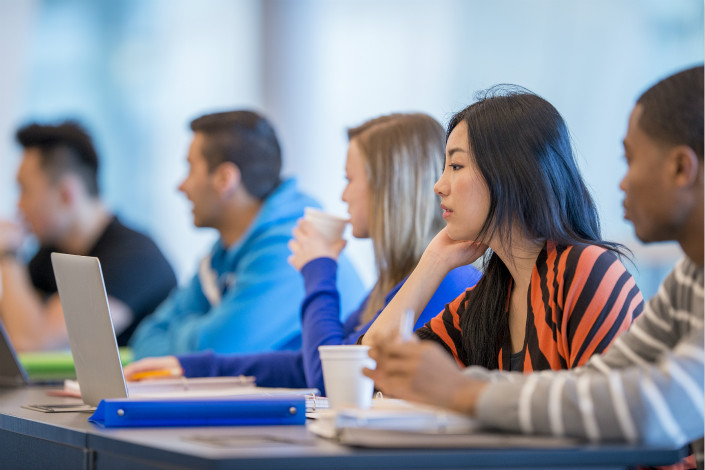 U.S. limits on student visas for Chinese students would no doubt backfire by hurting the American higher-education industry. Photo: VCG

U.S. President Donald Trump keeps turning up the heat on China over trade and intellectual property. A new tactic reportedly under consideration is limiting the number of student visas to Chinese citizens, which would be part of a package of sanctions against Beijing amid fears of a growing trade deficit and technology leaks.

Politico magazine quoted U.S. officials as saying the Trump administration is mulling the cap on Chinese students seeking a U.S. education in science, technology, engineering and math. Although details of the move have not been disclosed, the policy is bound to meet with strong oppositions from U.S. universities, which have been increasingly relying on international students to stay afloat.

Indeed, EducationUSA, an advising center of the U.S. Department of State, is hosting a series of college fairs in five Chinese cities over the following two weeks. More than 100 American universities from 31 states participate in this annual event, which aims at growing their footprints in China and attracting more Chinese students to study in the U.S.

The U.S. government’s opposite attitude toward Chinese students reflects the policy incoherence of the Trump administration while highlighting the growing importance of the Chinese market to American universities that see Chinese students as an important source of revenue.

For decades, Chinese students have grown into the most visible international presence at many universities across the U.S. During the 2016-17 academic year, the number of Chinese students studying stateside has climbed to 350,755, accounting for one-third of the 1.1 million foreign students in U.S. universities, according to the Institute of International Education (IIE).

It’s the eighth year in a row that China has topped the list as place of origin for international students in the U.S. More importantly, China also contributes the lion’s share of international students’ financial contribution to the U.S. economy with $12.5 billion out of $39.4 billion. Almost 1 in 3 dollars comes from Chinese students.

Take the Arizona city of Tempe, a typical college town, as an example. As the home to Arizona State University (ASU), Tempe’s unemployment rate is 3.7%, much lower than the national average of 4.1%. Its good economic performance is largely the result of the influx of international students, who pump $618 million into the local economy in yearly expenditures. In past years, the total population of international students on the ASU campus has grown at an average rate of 25%. China is the largest contributor to this growth, making up more than 40% of foreign students. No wonder ASU President Michael Crow reiterated the utmost significance of the Chinese market to ASU during his visit to China last year.

An ASU recruiter told me: “Chinese students are bringing a large amount of revenue lift to ASU in the form of threefold tuition fees and other payments. They also boost local economies through personal spending.

“Driven by the demand, many new facilities like apartments, restaurants and shopping malls are built in Tempe and nearby areas to give them a better a standard of living. As a result, employment opportunities rise sharply in terms of less-skilled jobs like restaurant waiters and construction crews that are urgently needed by local blue-collar workers.”

Like ASU, many other public universities in the U.S. have also increased their reliance on the revenue provided by overseas students, particularly those from China, owing to shrinking funding from state governments. Last year, a sharp drop in student visas has already worried some American universities. The enrollment officers blamed Trump’s controversial immigration policy for triggering panic and anxiety among international students.

Even worse, the Trump administration is also considering imposing restrictions to the Optional Practical Training program, which allows eligible F-1 students to apply for temporary employment after obtaining a degree from an accredited university. Some Chinese students who are planning to study aboard expressed their concerns over the unfavorable changes in the visa policy, and said that they would like to choose countries like Canada, Germany and Australia, where it is easier for international students to stay after graduation and become part of the workforce.

Apart from the political driver, economic factors, including increased tuition fees and the depreciation of the yuan against the dollar, also dented America’s share in the increasingly competitive global education market. Now only 24% of international students worldwide come to the U.S., IIE President Allan Goodman said. To compete with the U.S., universities from Australia and the U.K. provide more customer-friendly service via Chinese social media to facilitate the application process.

Crow of ASU pointed out that given the growing global competition, American higher education cannot assume its competitive position in the world is unassailable. Under this circumstance, Trump’s choreographed visa restriction would no doubt backfire in the end by hurting the American higher-education industry, which runs a big trade surplus with China, as well as the local economies.

Besides, Trump’s visa restrictions would also harm the student exchanges between China and the U.S., which form an important part of their bilateral relationship through enhancing mutual understanding and building a strong connection between the two countries.

Wang Xiaofeng is currently a Humphrey Fellow funded by the William Fulbright Scholarship Board. Previously, as a Beijing-based journalist, she covered China’s foreign affairs with a focus on its relationship with the U.S. and its Asian neighbors.