Hebei ‘Ghost Town’ to Get Billions More in Investment

By Luo Guoping and Pan Che 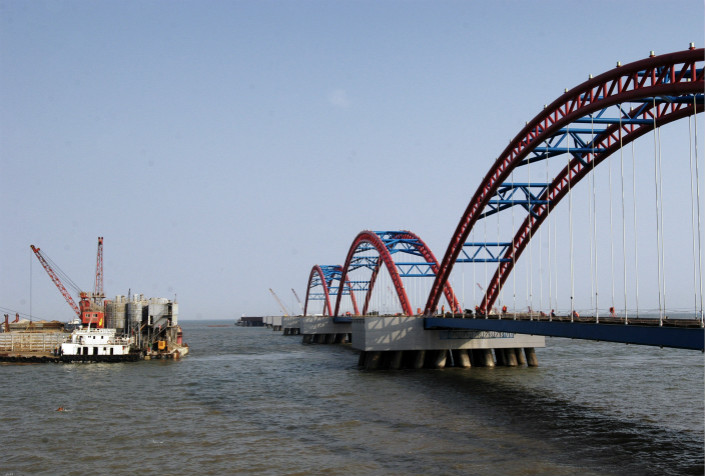 A 300,000-ton Sinopec oil terminal is seen under construction in the Caofeidian industrial zone in Hebei province in July 2007. Photo: VCG

Hebei’s provincial government has approved a development plan that aims to revitalize a once-promising industrial zone, now reportedly a ghost town despite billions in investment.

The North China province said in a statement published last week that it endorses “in principle” a plan to turn the Caofeidian industrial zone into an oil-refining and petrochemical integrated zone, with oil-refining and petrochemical facilities that have a total annual production capacity of about 50 million metric tons (55.1 million tons) per year.

Hebei authorities said the zone’s future development will be in line with the province’s industrial restructuring and the upgrading of the petrochemical industry in the Beijing-Tianjin-Hebei region. Caofeidian will host facilities such as oil-loading docks capable of handling 80 million tons of crude oil and 20 million tons of liquefied natural gas per year.

The Caofeidian industrial zone, located on the coast of the Bohai Sea about 80 kilometers (50 miles) to the south of the Hebei city of Tangshan, has long been the target of government-led investment. During a 2007 visit, then-President Hu Jintao called the zone “as precious as gold.”

However, it hasn’t lived up to the hype over the past decade. Although billions of yuan was poured in, only a few thousand people have moved into the area. According to a 2014 report from the London-based Guardian newspaper, the “ghost town” is littered with half-built buildings and abandoned tourist resorts.

It is not clear how indebted the zone is, as the government has not released this data. The Caofeidian government’s official website says that the total investment in the zone over the last decade has amounted to about 500 billion yuan ($79.6 billion).

It appears that the new expansion plan will see debt continue to pile up, as Caofeidian plans to take on 76 billion yuan in fixed-asset investment in 2018 to ensure sufficient funding for more than 160 refining and power projects.