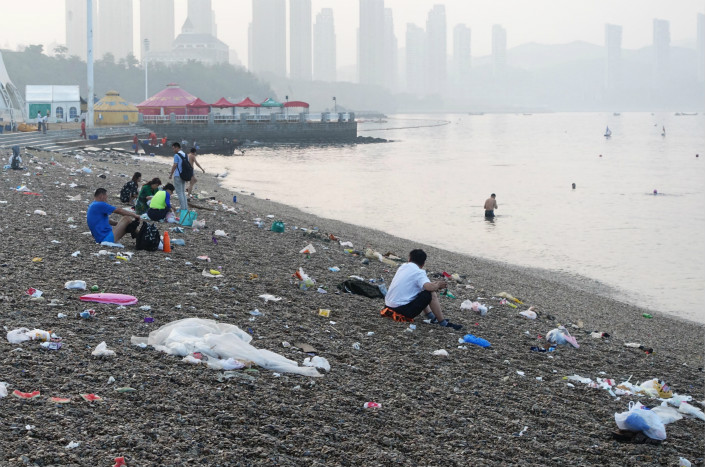 Master Kong instant noodles, Want-Want rice crackers, Nongfu Spring mineral water and Coca-Cola — these are some of the products accounting for large quantities of plastic washing ashore China’s beaches, according to a report published by a Shanghai-based environmental organization.

Out of the plastic waste that still bore identifying marks of consumer brands — mostly beverage and snack-food brands — researchers found that several brands accounted for at least 100 items on every beach, including Master Kong, Nongfu Spring, Mengniu Dairy, and Red Bull.

Plastic waste in the world’s oceans is “not a problem that can be blamed on a single source,” said Xiao Feng, a Shanghai Rendu researcher and one of the main authors of the report.

But by highlighting the consumer brands responsible for polluting Chinese beaches, the authors said they hoped to “awaken the joint awareness of consumers and businesses, initiate responsible consumption and production behavior, and actively participate in actions to reduce marine litter.”

The report published Tuesday was inspired by international efforts to categorize man-made debris in the world’s oceans by brand, including Greenpeace’s September 2017 report on plastic pollution on beaches in the Philippines, which exposed Nestle, Unilever, and P&G as some of the biggest sources of plastic pollution, Shanghai Rendu Director Liu Yonglong told Caixin.

Five to 13 million tons of plastic waste are deposited in the world’s oceans every year, trapping or suffocating marine organisms and releasing toxic substances into the water, according to a 2015 report.

China’s shift in recent years from an exporter to a consumer of goods that contain plastics has seen its per capita consumption of plastics rise from 22 kilograms (48.5 pounds) to 46 kilograms in just five years between 2005 and 2010, according to plastics industry publication Plastics Today.

In 2008, China banned the practice of giving out free plastic shopping bags, but continues to struggle to curb demand for plastics and change consumer habits.