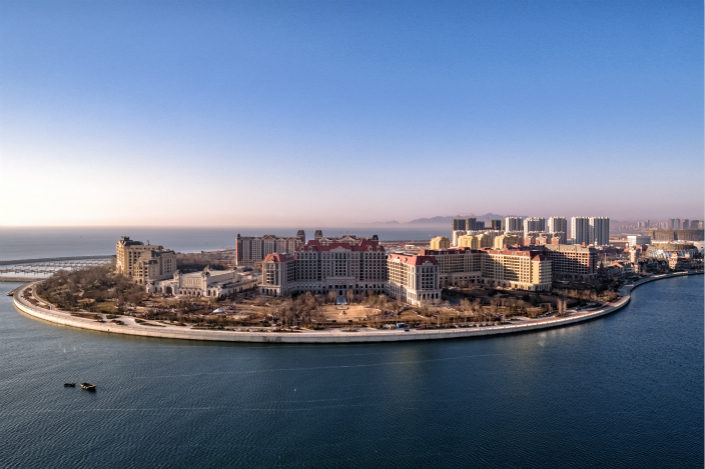 That’s how long it took Dalian Wanda Group to build a massive 50 billion yuan ($7.9 billion) entertainment complex, complete with film-making facilities and a theme park as its centerpieces, about 30 kilometers (18.6 miles) outside the picturesque coastal city of Qingdao in East China’s Shandong province.

But over that time, Wanda and its charismatic founder, Wang Jianlin, have gone from rising stars to one of China’s biggest doghouse debtors, weighed down after a massive spending spree that included billions of dollars in global acquisitions and construction of a national chain of hotels and theme parks.

The centerpiece of that park-building spree was center stage on Saturday, as Wang and Wanda formally opened their Qingdao Movie Metropolis, a massive complex featuring 30 film studios, a theme park, shopping mall, luxury hotels, and even a yacht club and international hospital.

In a brief four-minute speech at the opening ceremony, Wang said his aim is to “turn Qingdao into the world’s eastern film capital,” and called his project a “milestone of movie industrialization in China.” There was no time reserved for taking questions from the media afterwards.

The event was far lower-key than the one in 2013 when Wang first announced the project and his company was quickly rising. That event saw Wanda fly in such Hollywood A-listers as Leonardo DiCaprio, Nicole Kidman, John Travolta and Catherine Zeta-Jones for a star-studded affair that made global headlines.

This time the guest list was filled with high-level bureaucrats from Qingdao and Shandong province, as well as representatives from most of the major Hollywood studios. The only major movie star to come was local star Huang Bo, a Qingdao native who just happened to be shooting a film in one of the Movie Metropolis’ soundstages at the time.

Standing symbolically next to Wang on the stage was Sun Hongbin, whose real estate company, Sunac China Holdings, helped to bail out Wang and Wanda last year by buying a 91% stake of the company's 13 cultural and tourism projects, including the one in Qingdao.

The Movie Metropolis represents the entertainment empire Wang was trying to build before he got stopped in his tracks by too much debt and a government crackdown on excessive spending by a young group of private Chinese conglomerates. At the same time, Wang’s theme park empire is feeling the heat of competition, as a flood of similar parks developed by both local and national operators enters the market.

The opening of Movie Metropolis came just two days after the Shanghai Disney Resort opened its Disney-Pixar Toy Story Land, the seventh themed land at the 2-year-old park. Earlier this week, U.S. park operator Six Flags said it would add a multimillion-dollar entertainment complex to its own developing portfolio of China properties.

The landscape was far different when Wanda began to build its entertainment empire around 2012. The company first burst onto the global stage that year when it purchased AMC Entertainment, a leading U.S. cinema operator.

It went on to buy Starplex Cinemas and Carmike Cinemas, Hoyts from Australia, and British chain Odeon & UCI Cinema Group. At the end of that spree, the company had become the world’s largest theater operator, with more than 1,300 cinemas and over 14,000 screens, accounting for 12% of the world total. It also made headlines in 2016 with its $3.5 billion purchase of Hollywood studio Legendary Entertainment.

But things changed radically last year, when Beijing began clamping down on overseas buying by Chinese firms, especially on companies purchasing assets in the entertainment, leisure and real estate sectors.

Wanda has been on a nonstop selling spree since then, culminating with its sale in July of 13 cultural and tourism projects across China, including the Qingdao one. Sunac agreed to pay 43.84 billion yuan for 91% of the projects. Eight of the deals have already closed, though the other five, including the one in Qingdao, are still pending.

At the same time it unloaded its theme parks, Wanda also sold 77 hotels to R&F Properties for 19.91 billion yuan. It has also disposed of overseas projects in Madrid, London, Sydney and Austrlia’s Gold Coast.

With the launch of the Qingdao Movie Metropolis, Wanda has confirmed its shift to the domestic market. Wang said he hoped his new facility could “promote Chinese movies to the global stage,” reflecting his newer tone that is more focused on projects in his home country.

Wanda, together with Sunac and the Qingdao government, has set aside 5 billion yuan worth of special funds for film and television development between 2017 and 2021. Wanda said in 2016 it was in talks to accept 30 foreign film production teams and 100 domestic ones each year.

“Qingdao is a good location for a production base,” said Chris Yoshii, vice president and global director of AECOM Asia's leisure and culture services and an Asia Pacific board member of the Themed Entertainment Association. “However, this requires an entire ecosystem of talents, software, hardware and facilities, built up over years to be successful.”

One factor that could help the new studio facilities is their suitability for shooting by both domestic and overseas production teams, especially cost-conscious ones from Hollywood, said a film industry expert who asked not to be identified.

The studio facilities will function like a second Hengdian, another massive facility that opened in 1996 in East China’s Zhejiang province, if they fail to attract foreign producers, he said. He added that film companies may come to Qingdao to try to take advantage of Wanda’s strong film distribution network from its large cinema holdings.

Besides filmmakers, Wanda also hopes to attract tourists to the Qingdao theme park as well as other entertainment facilities. But its theme park aspirations could be stymied by a larger wave of similar parks being built across the country.

Foreign brands like Walt Disney, Six Flags, Universal Studios, Lego and publishing group Media-Participations have all built parks or are in the process of building them. Domestic operators Chimelong and Happy Valley are also expanding, crowding the industry even more.

“Wanda’s brand in the theme park industry is not very well known as they are very new to the business,” said Yoshii from AECOM.

But there is large market demand for theme parks in Qingdao, from both tourists who visit to see the city’s coastal scenery and local families that wish to spend a weekend nearby, said Sun Xiuping, general manager of the theme park design and construction department of Shenzhen-based developer Creartive.