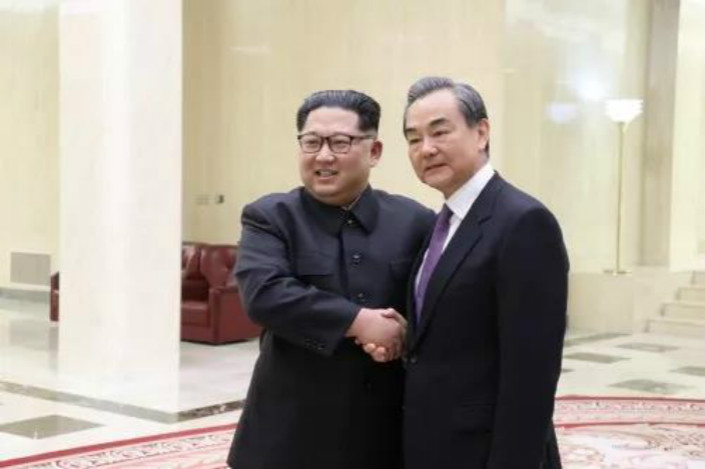 China is considered North Korea’s most important economic and diplomatic backer, despite its anger at North Korea’s repeated nuclear and missile tests, and its support for strong U.N. sanctions against the North.

However, China has also welcomed moves by North Korea to improve ties with South Korea and the United States.

The North surprised the world several days before the summit by declaring it would dismantle its nuclear test site to “transparently guarantee” its dramatic commitment to stop all nuclear and missile tests.

Meeting in the North Korean capital, Pyongyang, Kim told Wang that recent positive changes on the peninsula were beneficial to a peaceful resolution, China’s Foreign Ministry said in a statement.

“Kim Jong Un said achieving the denuclearization of the peninsula is the firm position of the North Korean side,” the ministry said.

Wang told Kim that North Korea had made the right and decisive decision, bringing positive changes.

Last week’s summit talks between the leaders of the two Koreans had brought about an opportunity for a political resolution, Wang added.

China supported an end to the state of war on the peninsula, North Korea’s shift to economic development and the resolution of North Korea’s legitimate security concerns during the denuclearization process, he said.

“China is willing to maintain communication with North Korea on this and increase coordination,” he said.

The 1950-53 Korean War technically is still going on because fighting ended with an armistice, not a peace treaty.

In an earlier statement, Wang said China hoped dialogue between North Korea and the United States will be successful and that substantial progress will be made, referring to an upcoming meeting between Kim and U.S. President Donald Trump.

“China is willing to strengthen communication with North Korea and continue to play a positive role in seeking a political solution to the Korean Peninsula issue,” Wang said.

South Korea’s presidential official said high-level inter-Korean talks will be held in mid-May to work on implementing the agreement reached by Kim and Moon.

Kim made a surprise trip to Beijing to meet Chinese President Xi Jinping in late March. It was Kim’s first trip outside his country during six years in power. During his meeting with Xi, Kim said he was committed to the denuclearization of the Korean Peninsula and open to dialogue with the U.S.

The two sides, whose ties became cooler in recent years because of North Korea’s nuclear and rocket tests, touted their traditional friendship during the Xi-Kim meeting.

Wang said on Thursday Kim’s Beijing visit had opened a new chapter for the two countries.