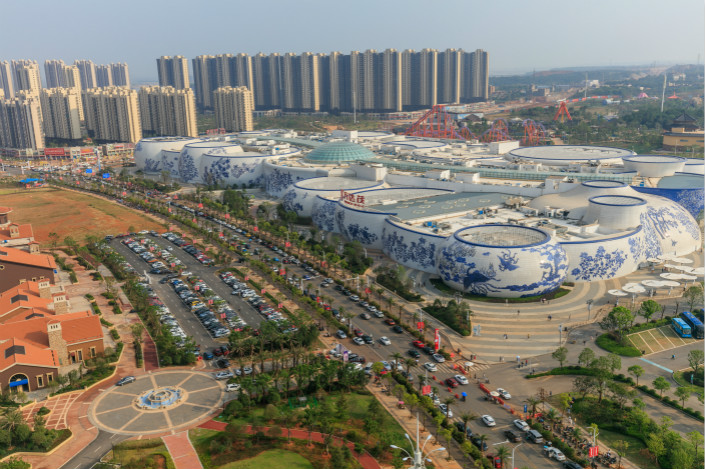 Authorities must strictly control land use and restrict the construction of residential buildings in the areas surrounding theme parks, National Development and Reform Commission (NDRC) spokesperson Meng Wei said at a routine news conference on Wednesday. Meng also called for greater controls on the debt that local governments can take on in order to support theme park projects.

Wednesday’s warning follows the NDRC’s earlier moves to crack down on the construction and extension of “mega theme parks.” The commission complained in April that the sector was rife with “unclear concepts, aimless construction and copycatting.”

China’s theme park industry has ballooned in recent years thanks to the country’s growing middle class, with examples like Guizhou province’s Oriental Science Fiction Valley, a “virtual reality theme park” that opened in early May. The sector is predicted to bring in 89.2 billion yuan ($14.0 billion) in sales revenue by 2022, more than double that in 2017, according to market research firm Mintel. Over 40% of Chinese urban consumers between the ages of 20 to 49 visited theme parks more than once in the 12 months before August, according to Mintel.

But the theme park boom has raised concerns about local government debt and unsustainable growth. In 2016, only 10% of the country’s more than 2,000 theme parks were profitable, according to state broadcaster CCTV. The sector has also long been plagued by international property theft. Joyland in Changzhou, a two-hour drive west of Shanghai, has been criticized for its unlicensed use of elements from Blizzard Entertainment’s online game “World of Warcraft.”

Many theme park projects are backed by real estate developers who see the projects as an opportunity to buy land slated for public facilities (including theme parks) at lower prices, and then build residential units on a portion of the land, in what has become known as the “theme park plus real estate” model.

A lack of strict regulations on residential buildings within theme park areas is one of the reasons developers are attracted to theme park projects, an industry insider told Caixin.

Wanda Group, the property and entertainment conglomerate that once planned to rival The Walt Disney Co., was among the developers that acquired tracts of land cheaply in recent years using the “theme park plus real estate” model.

But Wanda, which had engaged in an acquisition spree in recent years, sold off many of its hospitality and theme park assets last year amid concerns about its massive debts.