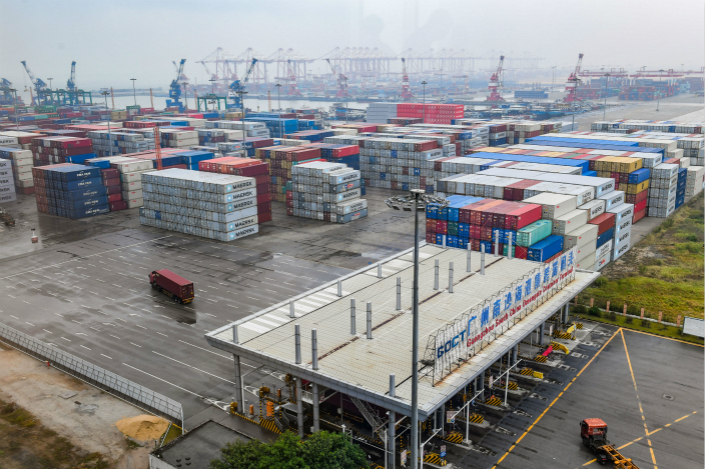 *Beijing warned that if the U.S. moves forward with these latest measures, it would “be forced to take comprehensive measures that are both strong in quantity and gravity to fight back forcefully”

China on Tuesday vowed to fight back “forcefully” after the U.S. announced potential new tariffs on Chinese exports, calling the measures “extortion.”

The latest developments highlight a renewed escalation of trade tension between the world’s two largest economies.

U.S. President Donald Trump said on Monday in Washington that he had ordered the United States trade representative to identify $200 billion worth of Chinese goods for additional 10% tariffs. The decision came in response to China’s announcement that it would impose taxes on $50 billion worth of American products if the U.S. goes ahead with a plan to slap punitive tariffs on Chinese goods of the same value. Trump also threatened to pursue tariffs on another $200 billion of goods if China retaliates again.

A few hours after Trump’s announcement, the Ministry of Commerce issued a furious statement blasting the tariff threat. “The (U.S.) move, which goes to extremes to put pressure (on China) and amounts to extortion, is against the consensus the two sides reached after multiple rounds of negotiations and is set to disappoint the international community,” an unnamed spokesperson for the ministry said in the statement.

“If the U.S. loses its sense and publishes a (new) list, China will be forced to take comprehensive measures that are both strong in quantity and gravity to fight back forcefully.”

Trump said his latest tariff threat was necessary to “encourage China to change its unfair practices, open its market to United States goods, and accept a more balanced trade relationship with the United States.”

However, Beijing indicated that it will not give in. “Regardless of how the external environment might change, China will … firmly move ahead with reform and opening-up at a pace it has already decided upon,” the ministry spokesperson said in the statement.

No room to back down

Trump is raising the stakes in the trade spat again in an attempt to gain more leverage in talks with China, analysts said. But China is unlikely to abandon its tit-for-tat retaliation strategy, at least openly, due to concerns that it could trigger resentment against the government among the Chinese public and embolden the U.S. to demand more concessions, they said.

“China has no room to climb down and has to take tit-for-tat measures because Trump may want a mile if he gets an inch,” Ruan Zongze, executive vice president of the China Institute of International Studies, a think tank of the Ministry of Foreign Affairs, told Caixin.

The newly proposed U.S. trade measures would be unacceptable to any country, so Beijing can’t just let the American taxes take a toll without hitting back, regardless of how much it loses in a trade war, said Liu Yawei, director of the China Program at The Carter Center, a nongovernmental organization founded by former U.S. President Jimmy Carter.

China had set a timetable and action plan to grant U.S. financial and service industries wider access to its market and promised to increase purchases of American commodities, he said.

“The Chinese government cannot make further concessions. The Chinese public would not allow it,” he said. “Judging from the current situation, the only way out is through a trade war. … Only after the two sides have suffered might they look for a face-saving way to restore negotiations based on lobbying by interest groups in each country and changes in the international environment.”

Because China imports far less from U.S. than the U.S. imports from China, some have questioned whether Beijing has the ammunition for tit-for-tat retaliation in a trade war.

However, Beijing could simply jack up the tariff rate on American products, which could make inbound shipments of some of the goods to become economically unviable because prices would be too high for Chinese consumers, said Tu Xinquan, dean of the China Institute for WTO Studies at University of International Business and Economics.

The U.S. has until July 6 to impose the punitive tariffs on $34 billion in Chinese goods, according to the Trump administration’s announcement on Friday. Taxes on an additional $16 billion will come at a later date. “So there is more to talk about and time to talk,” Scissors said.

But Eswar Prasad, a professor of trade policy at Cornell University, cautioned that it will take “a determined effort” by both governments to come up with a compromise. “It will be challenging for both sides to find a way to de-escalate these tensions while saving face and before trade and investment flows between the two countries take a sizable hit,” he said.

Scissors warned that China should refrain from retaliating in a way that worsens the trade deficit because that would cause Trump to “escalate” due to his belief that the imbalance represents “unfair Chinese practices.”

Meanwhile, Trump should not expect President Xi Jinping to give in to U.S. pressure to embrace Washington’s “very sweeping goals” for structural change in the country’s economy, he said. Xi “will not adopt them just because the U.S. wants them, so the U.S. is being unrealistic,” he said.