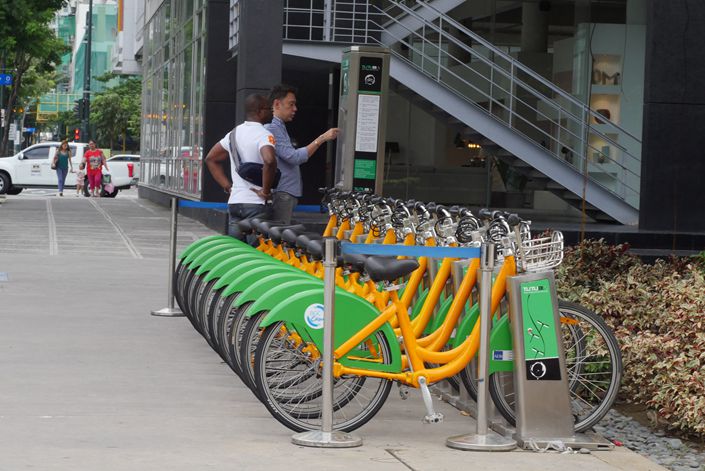 The Asian Infrastructure Investment Bank’s sharing bicycle project took to the streets of the Philippines in September 2016. Photo: VCG

The China-led Asia Infrastructure Investment Bank (AIIB) has hit back against accusations it is failing to live up to its commitment to green investment, arguing that its support for projects involving fossil fuels is needed to achieve the long-term goal of sustainable energy.

The Bank Information Center Europe, a nongovernmental organization, and a conglomerate of Indian civil-society groups said in a report that the AIIB’s investment patterns show it is not remaining green, and that its environmental and social policy is not sufficiently comprehensive to prevent the bank’s capital from going to risky projects.

The AIIB has spent about $1 billion on fossil-fuel projects, with half of its approved projects in the energy sector involving fossil fuels.

The report also criticized the AIIB for handing cash to financial intermediaries who then fund specific projects that may not be environmentally friendly.

The report also pointed to the $100 million given by the AIIB to India’s National Investment and Infrastructure Fund, which the report claimed has funded projects that pose environmental and social risks.

In a statement sent to Caixin, the AIIB said that fossil fuels will be necessary in the transition to sustainable energy and therefore the bank doesn’t ban funding projects that involve coal or natural gas.

The AIIB, which has gained 87 member countries since opening for business in 2016, finances Asia-centric infrastructure development projects. The bank has touted its commitment to staying “lean, clean, and green,” or efficient, anti-corruption, and environmentally sustainable.

The statement also said that the AIIB has dual responsibility both as a green bank and a multilateral development bank. The bank said it approves projects on a case-by-case basis based on the needs of different countries, and that this flexible approach allows it to create a framework for the practical implementation of sustainable practices.

However, the report said that this is simply a way for the AIIB to absolve itself of the responsibility for funding environmentally and socially risky projects.

AIIB told Caixin that it finances only those projects that are demonstrably in line with the bank’s policies, and the best way to safeguard environmental protection and human rights is by being selective in the projects it finances.

The criticism was leveled at the AIIB just says before its third annual meeting, which was held this year in Mumbai, India.

The theme of the bank’s third annual meeting, which took place June 25-26, was “Mobilizing Finance for Infrastructure: Innovation and Collaboration.” The conference set out to address the oft-cited $8 trillion deficit Asia faces in infrastructure development. The AIIB has often touted the need to mobilize private capital to confront this deficit.