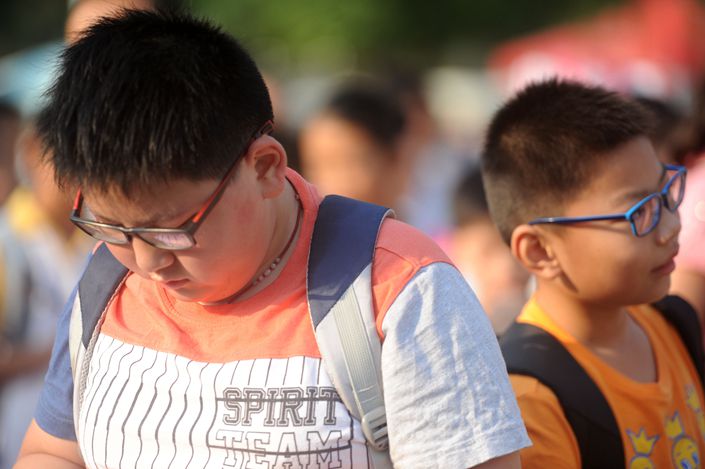 China’s young schoolchildren are overweight, have poor eyesight, and don’t get enough sleep. Oh, and they need to focus more on their creativity and analytical skills.

At least that’s the take-away from the country’s first comprehensive study on the quality of its mandatory education.

Among the findings, China’s schools should focus more on teaching children to be creative and analytical, while improving the “relatively weak” physical education they receive.

Researchers from the Ministry of Education tested (link in Chinese) 572,314 fourth- and eighth-graders across 31 provincial-level regions from 2015 to 2017, and found that the vast majority of students performed satisfactorily or better in language, mathematics, and science.

Children in China are required by law to attend six years of primary education and three years of secondary education, although many students also attend preschool from the ages of 3 to 5.

However, while the students excelled in areas like arithmetic, spatial visualization and scientific knowledge, many showed weaknesses in areas that require more critical thinking and creativity, like data analysis and scientific inquiry, the study found.

To address this, schools should incorporate more activities that allow students hands-on experience with nature and society, and should use more discussion- and exploration-based teaching methods in the classroom, the study’s authors recommended.

They also called for China’s schools to address the shortage of teachers and lack of well-rounded physical education, citing the high prevalence of obesity, poor eyesight, and sleep deprivation among schoolchildren.

Over 53% of boys and 63% of girls have moderately to severely impaired vision by eighth grade, and a whopping 83.4% of children get fewer than the nine hours of sleep a day recommended for middle schoolers by China’s Education Ministry.

Economic development is one reason for Chinese students’ expanding waistlines. Children tend to gain weight quickly in the early stages of economic development because of improved nutrition before reaching a plateau when increased scientific knowledge and changing perceptions of weight discourage behaviors that lead to obesity, Chen Wenhe, the director of the institute of physical education at the Shanghai University of Sport, told Caixin.

At the same time, Chen said, students’ heavy academic workload eats into the time they have for physical activity, contributing to obesity rates.

Contact reporter Teng Jing Xuan (jingxuanteng@caixin.com)
You've accessed an article available only to subscribers
Subscribe today for just $.99.
VIEW OPTIONS
Share now and your friends will read it for free!
Share this article
Open WeChat and scan the QR code