In Depth: Blame Game Erupts After Investors Bilked of Billions 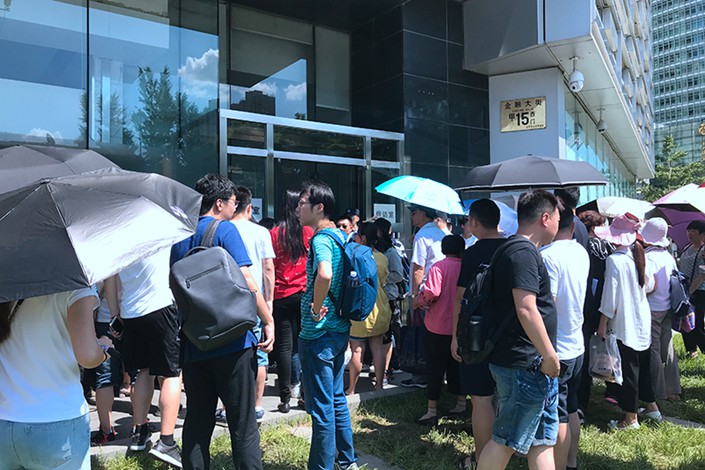 Fuxing Group investors gather in front of the office of the China Banking and Insurance Regulatory Commission in Beijing on July 26. Photo: Caixin

The alleged embezzlement of billions of yuan by the head of a financial conglomerate who has now vanished has ripped open a can of worms about the role and responsibilities of banks that are entrusted with looking after the assets of private funds — products sold to high-net-worth individuals and institutions by investment companies and mutual funds.

Regulators and legal experts are locked in a heated debate about whether custodian banks — financial institutions that a fund appoints to hold, safeguard, and administer its assets — should take more responsibility and compensate those who own shares, or units, in the fund when money disappears.

Laws and regulations are being pored over and argued over to determine whether custodian banks are in effect co-trustees of a fund, and as such have a fiduciary, or legal, obligation, to act with the highest standards of care. This would oblige custodian banks to shoulder greater responsibilities than they currently do in protecting the interests of unit-holders, and make them liable for compensating victims when the funds in their custody go missing.

The controversy has been triggered by a scandal involving Zhu Yidong, chairman of Shanghai-based real estate and financial conglomerate Fuxing Group. Zhu has been unreachable since late June amid speculation that his business empire was facing a liquidity crunch as he had failed to pay interest on a loan he had taken out using shares as collateral. The news stoked fears about the whereabouts of as much as 30 billion yuan ($4.39 billion), comprising funds raised by the company’s private-fund management firms and borrowed from banks.

Over the past three years, Fuxing has sold 158 products to high-net-worth individuals and institutional investors through three private-fund management firms it controlled. Investors who bought units in the funds were told the money would be invested mainly in startups and unlisted companies with high growth potential. Of those funds, 83 are still operational and are estimated to have a combined 24 billion yuan under management.

All of the funds were registered with the Asset Management Association of China (AMAC), a self-regulatory body backed by the China Securities Regulatory Commission and the Ministry of Civil Affairs. Money raised from clients was deposited in accounts, and custodian banks were appointed for the funds.

The banks have suspended the accounts of the funds, the AMAC said in a statement on July 13, but it’s unclear how much money has been misappropriated and may never be recovered.

It specifically told the banks to call a meeting of unit-holders and to undertake measures to safeguard the assets to “protect investors’ rights and interests as far as possible.” The AMAC also released a list of telephone numbers and contact points for the banks that it named as Ping An Bank, Hengfeng Bank, Shanghai Pudong Development Bank, China Zheshang Bank, China Merchants Bank, Bank of Shanghai, and China Everbright Bank.

The notice was a call to arms for worried investors. Several groups of individuals gathered at the Pudong branch of Bank of Shanghai and the Shanghai branch of China Everbright Bank, presenting the banks with five demands: seize the assets of projects that received investment from the funds, freeze all the assets of Fuxing Group, publish the management reports of relevant fund products, check the assets of the fund and report any violations to authorities, and meet with unit-holders. But the investors have so far refrained from filing any formal request for cash repayment.

But the China Banking Association (CBA), a self-regulatory body for the country’s lenders that is linked to the China Banking and Insurance Regulatory Commission, published two articles on its website on July 23 disputing the AMAC’s position.

In one article, Bu Xiangrui, the CBA’s chief legal adviser, said that the Securities Investment Fund Law covers only public funds and private funds investing in securities and therefore does not apply to the Fuxing case because its private funds specialized in equity and venture-capital investments. He rejected the AMAC’s assertion that the banks should be held accountable as a co-trustee, and argued that under existing regulations, they were not responsible for organizing meetings for unit-holders or safeguarding the assets of the funds.

In the second article, Ba Shusong, the CBA’s chief economist, argued that it was “inappropriate” to push banks to take over responsibility for the funds in the event the ultimate controller of a private fund disappears.

“This goes against the goal embedded in the new asset management rules, which is to break the implicit guarantee of repayment … in the asset management industry,” he said. “It may also lead to moral hazard,” he added, referring to a situation where a party, such as a private fund, takes on excessive risk in order to gain a high return because the cost of taking that risk will be borne by someone else if the investment goes wrong.

The AMAC’s order has also, unsurprisingly, aroused the ire of banks. An executive with the auditing department of a custodian bank involved in the Fuxing case told Caixin that his institution charges a fee of only 0.05% of the capital private funds raised from unit-holders for custodian services, while fund managers and distribution agents earn 2% for their services.

“Banks are paid peanuts, just enough to buy a cup of tea,” he said. “Should our liability then extend to the entire teahouse? How is that possible?

“We must resist this administrative interference and break the repayment guarantee to educate investors that it is they who should be responsible for both the profits and losses on their investment.”

In a sign that the custodian banks have decided to snub the AMAC, they have met unit-holders only to compile a list of names, contact details, and documents proving their investment in the funds. So far, they have not outlined any plan to take further steps, and have not even agreed to call a meeting, according to investors interviewed by Caixin.

But there has been widespread criticism that the custodian banks failed to adequately supervise the private-fund managers as stipulated in the tri-party contract signed with the funds and unit-holders, let alone alert investors or the authorities to any suspected wrongdoing.

Sources with knowledge of the matter who spoke to Caixin gave several examples of situations in which the banks fell short. They said it was only after Fuxing’s Zhu disappeared that some custodian banks carried out any scrutiny of the funds’ activities. The banks’ investigations found that some of the funds’ investments were shell companies whose only business was holding cash. They also found that unit-holders’ money, meant to be kept together in one account, was transferred out before the funds’ subscription period ended.

The custodian banks have also been accused by some sources of flouting money-laundering regulations as they failed to register that huge sums of money were withdrawn by certain individuals from the funds’ bank accounts, with more than 10 separate withdrawals of more than 100 million yuan each.

An executive at the head office of one of the custodian banks told Caixin that it is common in the industry to focus on just signing up new customers rather than controlling risk, which means banks don’t invest the necessary resources and manpower in custodian services.

Other legal experts point out that it is disingenuous to claim custodian services aren’t covered by the Securities Investment Fund Law. One of the law’s provisions is that fund managers and custodians should assume liability for compensation if they violate either the law or the fund investment contract while performing their duties.

Most of the private-fund investment contracts involved in the Fuxing case were drafted and signed in accordance with laws that include the Securities Investment Fund Law, a senior legal scholar, who declined to be named, told Caixin. A source close to the regulators noted that banks obtained their license to provide custodian services within the legal framework of the Securities Investment Fund Law and other rules. Consequently, banks are just trying to duck their responsibilities by claiming the law doesn’t cover this type of situation, he said.

Custodian banks are also liable under the Trust Law, according to Wang Yong, director of the Research Institute of the Commercial Law at China University of Political Science and Law. The custodian banks are co-trustees and should share the liability of compensating unit-holders because the private-fund investment contract was, by nature, a trust, Wang said.

The banks’ failure to meet their obligations is evident given the fact that the losses investors suffered were caused by embezzlement by the private-fund managers rather than by unwise investment decisions, he said.

Wang added that as co-trustees, the banks have a fiduciary duty to the unit-holders, and holding a meeting after losses have been incurred is a basic part of living up to that commitment. Refusing to do so “clearly goes against (the spirit of) fiduciary duty,” Wang said.

The banks are at least liable for investigating the authenticity of the projects the private funds invested in, the purpose of the transfers of money out of the funds, and basic information about the companies receiving the money, even if they are not responsible for returns on the investment, a lawyer specializing in securities and investment funds, who declined to be identified, told Caixin.

“Fiduciary duty goes beyond just transferring money according to the fund managers’ instructions,” he said.

All the custodian banks involved in the Fuxing scandal are midsize institutions, and none of the country’s “big four” state-owned banks is affected. Sources told Caixin that large state-backed banks, which enjoy huge leverage in the financial industry, prefer to act as custodians for public funds, while private funds tend to turn to smaller banks.

Acting as a custodian for publicly offered funds is less complicated than for private funds because they are more transparent, said an executive with the custodial services department of a large bank. The investment portfolios of public funds are mostly traded on exchanges or the interbank market, with every transaction recorded, making it easier to monitor a fund’s activities, he said.

A manager in the custodial services department of a city commercial bank also said that it’s impossible for custodian banks to have the required time or resources to investigate and verify the authenticity of private funds’ investments if they are not traded on official marketplaces.

Domestic banks in general do not have the necessary infrastructure to properly handle the custodian business, he said. Only a few banks, for example, can afford to build a centralized electronic platform at their headquarters that would be robust enough to manage more than 1 trillion yuan of custodian assets, he said.

Operational standards vary significantly even within the same bank, depending on the branch, making it hard for the head office to supervise, while employees carrying out the day-to-day work often have other roles at the bank and are not trained properly, he said.

Some industry insiders complain that banks have no incentive to invest resources in custodial services and no capacity to take on the associated risks given the low fees they charge.

Wang acknowledged that custodian fees in foreign countries are higher than those in China, and regulations are more detailed and clearer so banks know exactly what their obligations are.

He said he hoped the Fuxing case will push Chinese authorities to promote fiduciary duty as the standard for the industry. This has a crucial role to play in reinforcing checks and balances between the private fund managers and the custodians, he said.

The Fuxing scandal should also be a wake-up call for custodian banks, the lawyer said.

“Don’t sign up new customers in a cavalier way. And once you’ve got your client, make sure you can meet all your obligations,” he said.