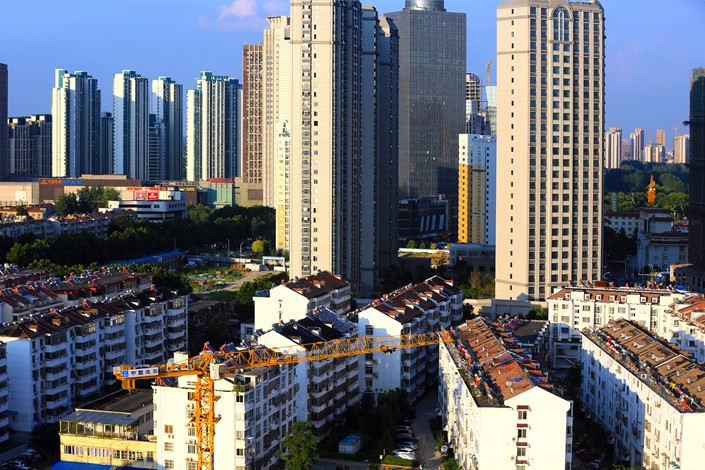 A residential building is seen next to the Dayun River in Huaian, Jiangsu province, on Sunday. Photo: VCG

Why are home prices in China so high?

One popular answer is that house prices are rising because of excess money supply. This view is wrong. In reality, the opposite is true — the development of the property market contributes to the money supply. Before a plot of land is developed, it has practically no value. But once it is developed, this plot of land begins to create money. The reason is very simple. The developer must borrow money from banks to buy the land, and then borrow even more to build homes. When the homes have been built, homebuyers will take out home loans. All of these processes add to the money supply.

There are several reasons for the growth of home prices in China. The first is the rising incomes of ordinary Chinese people. Even though most homebuyers need to take out a mortgage before they can afford to buy homes, they still need to meet minimum income requirements when borrowing from banks. The second reason is the investment behavior of China’s high-income population. Homes are a kind of asset, which is why people speculate on them. The third reason is local governments’ artificially driving up prices. Rising home prices benefit local governments, which rely on land sales for revenue. Additionally, some local officials mistakenly consider home prices as an indicator of a city’s level of development. So practically every city uses some method — such as limiting housing supply — to raise home prices. The fourth reason is that public sentiment toward housing is relatively intense, with trends rising and dying rapidly, adding to the volatility of home prices.

Many Chinese cities are indisputably experiencing property bubbles. Why have over a decade of measures to control the property market continued to fail?

To begin with, policymakers seem to be unclear what their goal is. They appear to be interested in making homes more affordable for the masses, yet the measures implemented ultimately benefit only a small percentage of Chinese households. According to figures from Peking University, the highest-earning 10% of urban households in China are expected to make an average of 376,000 yuan ($54,600) in 2018. Assuming that, due to unequal distribution, over half of the households in the top 10% earn less than 376,000 yuan, if every household in the top 10% lives in a first-tier city, over half of them will have no way to afford to buy homes where they live, which can easily already reach 60,000 to 70,000 yuan per square meter (5,570 to 6,500 yuan per square foot). So the ultimate beneficiaries of home price controls are the top 5% of households. This seems to go against the intended purpose of home price controls.

Over the past dozen or so years, the government has followed a clear pattern. At times of economic downturn, they relax restrictions, and even encourage residents to purchase homes. When the economy heats up, they increase the magnitude of controls to suppress home prices. Actually, this entire process, including the periodic attempts to suppress prices, encourages the long-term increase of home prices. During periods of overactivity, when home prices have already begun to rise, government cooling measures ultimately send the message to citizens that there is still more room for prices to rise — otherwise, the government would not need to step in to suppress their growth. This contributes to homebuyers’ attitude of “chasing when prices rise and dumping when they fall.” In the end, the moment the government loosens its policy, people rush to buy homes, pushing prices even higher.

The third point is that the methods used to control the housing market are often irrational. Tightening restrictions on mortgages is a correct way of controlling home prices, because it suppresses demand. Restricting loans and land supply for developers, on the other hand, will produce the opposite of the desired effect because this will lower supply, pushing up prices.

So how should the Chinese government keep home prices stable?

The central government has on multiple occasions emphasized the need to build a system for controlling home prices that will be effective in the long term. The direction of policy has been set, and concrete steps for implementation are emerging. But it is still worth considering the following suggestions.

Firstly, there are two types of real estate. The first type is properties used as residences, while the second is investment properties. The latter creates speculation, and government attempts to suppress speculation will only backfire, which is what happened during the bubble and crash of 2015. The best method for tackling speculation is to allow the market to teach speculators a lesson. After a bubble reaches its peak, it will inevitably burst, and prices will dive, teaching speculators a lesson they’ll remember. The current cooling measures send speculators the message that the bubble will never burst because the moment prices reach a certain level, the government will step in to stabilize them. After home prices plummet, banks may face problems, but this is also a lesson for the banks: The property market is not a “bull” that can run free forever. Additionally, property speculators are all high earners, while those affected by collapsed peer-to-peer lending platforms are mostly ordinary people. If peer-to-peer platforms are allowed to collapse en masse, why aren’t property bubbles allowed to burst?

Secondly, the Chinese government should employ a dual-track strategy using different measures to manage investment properties and properties that are used primarily as residences. When it comes to investment properties, the government should strengthen its supervision of loans to suppress speculation. Doing so will avoid making the government foot the bill for high home prices, but will rather allow the market to naturally rectify high home prices. When it comes to properties used primarily as residences, the most important method for controlling prices is to increase the supply of social housing. The Chinese cities that have seen the slowest increases in home prices, such as Chongqing and Changsha, are all cities where the supply of social housing is relatively large compared to demand. Considering how local governments frequently lack financial resources, they should use the strategy of requiring commercial developers to build some social housing on every development when selling them land. This can ensure the adequate supply of social housing.

The third recommendation is to implement a preferential land policy to encourage developers to build homes for long-term rental, while enacting laws to protect renters’ rights. Even if the government is able to provide social housing, urban housing will inevitably be scarce, so it is necessary for people, especially younger city dwellers, to get used to the concept of renting. Developing long-term rental properties and giving renters legal protections can help to instill the habit of renting.

Yao Yang is the dean of the National School of Development at Peking University. This piece has been translated from Chinese and edited for length.