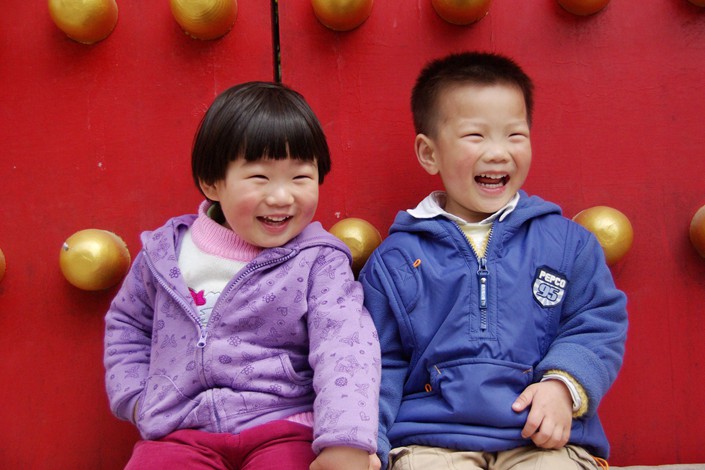 A pair of young siblings pose for a photo at the Ming Xiaoling Mausoleum in Nanjing, Jiangsu province. Photo: IC

The Chinese government has once again signaled that it might end decades-old birth limits that have led to a rapid aging of its population.

A draft civil code currently being discussed by the Standing Committee of China’s National People’s Congress (NPC) has removed any mention of family planning from marriage and adoption laws, suggesting that the central government is considering lifting restrictions on childbirth.

The official explanation for the deletions was “to adapt to new changes in China’s demographic situation.”

Despite having a civil-law legal system, China has never had a unified civil code. The NPC passed the general principles of the planned civil code last year, and is currently reviewing six draft sections, which span areas of non-criminal law, including contracts and marriage.

The omission of references to family planning is the strongest of multiple recent signals that China’s authorities are planning to scrap birth restrictions altogether.

The Chinese government forbade couples from having more than one child for years, with some exceptions, starting in 1979. Then, in 2016, the one-child policy was replaced with a new policy that changed the limit to two children. But the two-child policy has not been effective in boosting the country’s low birth rate, and fears are growing that it may be too late for China to avoid many negative effects of its aging population.

In March, Chinese Premier Li Keqiang left birth restrictions out of his annual work report to the National People’s Congress for the third year in a row, while top legislators and advisers issued calls for the government to lift the restrictions.

In May, Bloomberg News reported that China’s State Council had commissioned a study on the consequences of ending birth limits, citing unnamed sources. Then in August, China unveiled a new postal stamp design for the next lunar year featuring a pig family with three piglets, prompting social media users (link in Chinese) to speculate that the government will implement a “three-child policy” next year.

But while the new civil code may remove restrictions on births, other aspects of Chinese law, including the country’s constitution, still contain family planning regulations, legal expert Li Mingshun said.

“It goes without saying that couples are obliged to follow constitutional and other laws when it comes to family planning, without the need for the civil code to also emphasize these laws,” said Li, who is vice president of the China Law Society’s marriage and family law research institute.