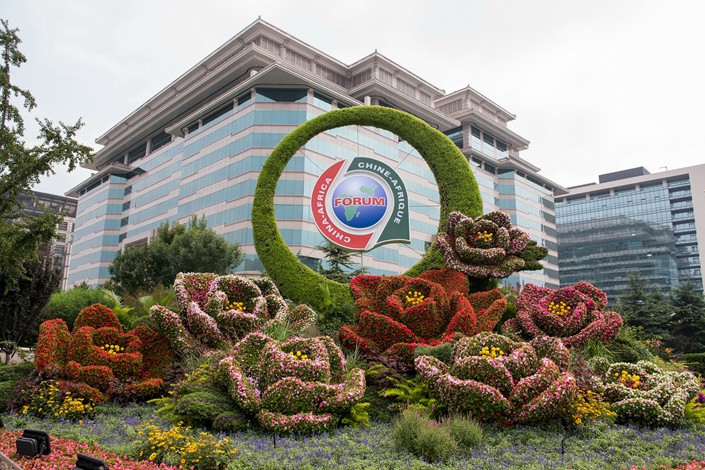 The 2018 Beijing Summit of the Forum on China-Africa Cooperation will be held on Sept. 3 and Sept. 4 in the Chinese capital. Photo: VCG

When the Forum on China-Africa Cooperation (FOCAC) was established in 2000 to strengthen China-African economic cooperation and trade, the rest of the world was perhaps bemused. Bilateral trade and investment was minimal and African economic prospects unpromising. China’s embrace of Africa — as framed by FOCAC — has ushered in exponential growth in commercial ties. Now, just 18 years later, China is Africa’s largest trade partner and bilateral trade and investment ties are growing rapidly.

Africa’s markets matter more to China every year. China has been recalibrating the destination of its sales abroad; and Africa needs well-made, low-cost products. Though sales have moved sideways since 2015, China’s exports to Africa more than doubled in the five years between 2009 and 2015, from $47 billion to $106 billion. Africa has proven a resilient market for China, with exports to Africa rising five percentage points faster than China’s sales elsewhere since 2010, at 14% year-on-year. In fact, 10 of China’s 15 fastest-growing export markets since 2009 are in Africa.

Fast export growth across numerous African nations has offset soft demand for Chinese products in recent years from Africa’s two largest economies Nigeria and South Africa; though, promisingly, year-on-year sales to these countries in 2017 rose for the first time since 2015, by 17% and 13%, respectively. Total China-Africa trade returned to growth in 2017, increasing 11.4% year-on-year to $169 billion. This was in large part thanks to the upturn in demand in Nigeria and South Africa as well as a recovery in global commodity prices — especially metals and hydrocarbons — which resulted in Chinese imports from Africa rising 32% year-on-year to $75 billion.

Although bilateral trade has grown rapidly in recent years, Africa has started to run a significant trade deficit with China since 2015. Only five African countries have a trade surplus with China. Kenya is a case in point. It shipped just $166 million of goods to China in 2017 but imported $5 billion goods in return, including the steel and equipment used for the $4 billion Chinese-built railway in the country.

Loans as a spearhead

The case of Kenya is illustrative of a broader trend of China-Africa economic cooperation. China’s policy banks — Export–Import Bank of China and China Development Bank — have spearheaded Chinese investments in large African infrastructure projects, with these two institutions alone having lent around $100 billion to African government and state-owned enterprises (SOEs) to date. Often specified in the master faculty agreements, such Chinese loans commonly lock up new markets for Chinese capital goods and equipment as well as employment opportunities for Chinese labour.

In 2017 alone, the newly signed value of Chinese contracted projects in Africa registered $76.5 billion. However, despite a sizeable remaining infrastructure deficit on the continent, there is a concern that African countries’ debt-service ability will soon dissolve. Debt to China accounts for about 14% of the stock of total debt contracted by sub- Saharan African countries, excluding South Africa.

Chinese foreign direct investment (FDI) into Africa — contrary to popular perception — remains small. According to official figures, annual FDI inflows from China into Africa have averaged just $2.1 billion over the last 15 years, with the country’s total FDI stock on the continent estimated in 2016 to be around $40 billion.

Official data on capital investment is based on the total investment the company makes at the time of the project announcement or opening. As companies can raise capital locally, phase their investment over time and channel their investment through different countries, the real value of FDI inflows is likely to be higher than official data figures. Calculating using this methodology, Chinese interests in Africa likely actually reached $95 billion in 2017, expanding at an average of 33% per annum since 2003.

South Africa hosts the lion’s share of China’s FDI, in large part owing to the investment made by the Industrial and Commercial Bank of China (ICBC) into Standard Bank in 2008. Seven other African countries have attracted a cumulative total of more than $1 billion in investment from China in the past decade: Zambia, Nigeria, Zimbabwe, Congo, Ghana, Kenya and Ethiopia; though two-thirds of African nations have hosted at least 30 deals over the same period — with the average deal size generally below $10 million — evidence of the broad reach of China’s engagement in Africa.

China’s Ministry of Commerce database captures over 3,500 Chinese-owned firms in Africa. However, these numbers underestimate reality on the ground. A recent study conducted by Standard Bank in Uganda, for example, estimates over 500 Chinese businesses in the country — more than 10 times the official figure — which together employ over 25,000 Ugandans. Across Africa, there may actually be over 30,000 active Chinese-owned firms, the vast majority of which are smaller privately-owned businesses.

Around 300 Chinese firms account for most Chinese investment and projects in Africa. Around one-third of these are SOEs. Approximately one quarter of the 98 SOEs directly under central State-Owned Assets Supervision and Administration Commission supervision have made material investments across Africa since 2003, tallying an estimated $29 billion. Probably twice as many other SOEs that are managed by local authorities have made another $20 billion in greenfield investment in Africa. These deals tend to be smaller in size, averaging around $240 million.

SOEs across a diverse range of sectors have invested in Africa. These include automakers, such as BAIC Group; financial institutions, such as Bank of China, ICBC and China Construction Bank; consumer electronics firms, such as Hisense and Hikvision; and industrial machinery manufacturers, such as Liugong, XCMG Construction and Zoomlion.

Predictably, those firms responding to economic incentives to invest in Africa most swiftly have been privately-owned firms — especially since 2013. Their foray into Africa is a sea-change from a decade ago when Chinese interests in Africa were predominantly driven by commodity acquisitions and large-scale government-to-government negotiated construction contracts.

There is a material difference in the sector distributions of Chinese investments in Africa. SOEs are more likely to invest in the construction and mining sectors, which respectively constitute 35% and 25% of their investment. Private firms, on the other hand, invest predominantly in manufacturing and services industries, which respectively constitute 36% and 22% of their investment. Indeed, out of $53 billion identified by private firms, as much as $19 billion has been earmarked for manufacturing. This is important for African development as manufacturing investment is proving a critical job creator, delivering twice as many jobs as extractive projects.

The most frequently cited motivations for investment in Africa are to gain access to the local consumer markets and to avoid competition in an increasingly saturated Chinese market. Africa has numerous advantages. These include significantly lower labour costs, an abundance of natural resources and essential inputs in production, its fast-growing domestic market, and favourable demographics. Although the internal conditions on the continent — from the business environment to government efficiency and infrastructure — remain challenging, they compare favourably to China in the 1990s when many Chinese multinationals cut their teeth. Chinese corporates are primed for increased engagement and success in Africa.

Jeremy Stevens is a China economist with the Standard Bank Group