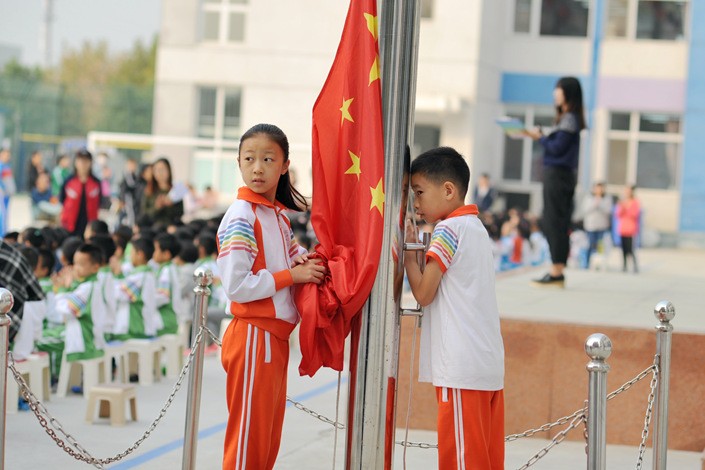 Two students prepare to raise a flag at a school in eastern Beijing on Sept. 30. Photo: Wu Gang/Caixin

The number of crimes committed in Chinese schools has seen a two-year decline, a new report shows. But experts say the problem continues to be serious, and the new figures may not fully reflect reality.

In 2017, Chinese courts handled fewer than 800 cases of campus crime, including extortion, intentional assault and murder, compared with over 1,000 in 2015, according to a report published Wednesday by the official China Justice Big Data Service Platform. The defendants in all these cases were students. In China, the minimum age for charging someone with a crime is 14 or 16, depending on the seriousness of the offense.

But these figures don’t give a complete picture of schoolyard violence, including bullying and fights, because not all cases of violence are criminal, Peng Xinlin, a deputy director at the College for Criminal Law Science at Beijing Normal University, told Caixin. The cases that ultimately make it to the judicial system typically involve older children and are those that police consider particularly serious, Peng said.

Dozens of serious school bullying cases have been reported by Chinese media in recent years, causing increased public concern about the issue. In 2015, a video of four preteen girls repeatedly striking another girl in Hebei province went viral, prompting an official investigation (link in Chinese).

In 2016, an essay written by a mother whose son suffered from anxiety after schoolmates threw a bucket of urine at his head sparked outrage online over how the school and local authorities handled the bullying (link in Chinese).

The government has responded with a range of measures, including a ban on reporting details of bullying cases to protect children’s privacy and prevent copycat behavior, as well as new central government guidelines for tackling bullying announced in December (link in Chinese).

For many adolescents, dorms are the main venue for extracurricular activities, said Song Yinghui, another deputy director at the College for Criminal Law Science at Beijing Normal University. “Multiple people share a single room. Due to differences in their lifestyles, there is inevitable friction, leading to conflicts. Additionally, because dorm rooms are private spaces, they are also frequently blind spots for school supervisors.”

It is common for Chinese children as young as 6 or 7 to attend boarding schools, especially in rural areas where schools are often hours away from students’ homes, and where many students’ parents live in distant cities with better job prospects.

One factor contributing to China’s bullying problem is the one-child policy the country had in place from 1979 to 2015, said Chu Chaohui, a researcher at the National Institute of Education Sciences in Beijing. “Children with no siblings don’t learn how to relate to other people as equals while growing up. When these children study, interact, and live in the same place, they tend to like showing off, and are less able to tolerate other people’s mistakes and differences,” Chu said. “Kids from families in poorer circumstances also frequently have an inferiority complex.”