Amid Venezuela’s Woes, Maduro Comes to China to Close Deals 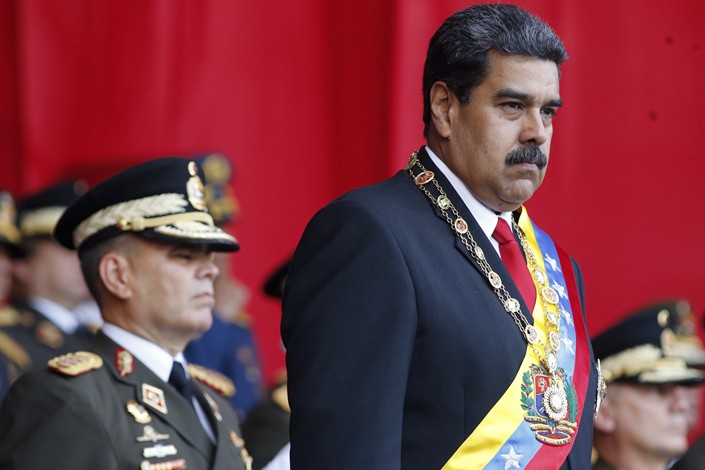 Venezuela’s President Nicolas Maduro watches a military parade on May 24 in the capital of Caracas. Photo: IC

Maduro was invited by Chinese President Xi Jinping to make a state visit to China from Thursday to Sunday, the Chinese Ministry of Foreign Affairs said in an online statement on Thursday.

The visit has attracted widespread attention as the oil-rich South American country has seen hyperinflation since 2014, when its oil industry, a pillar of its economy, was hammered by the plummeting price of oil. China has been a long-term trade partner with Venezuela, providing hundreds of billions of loans to the country in exchange for oil imports.

During its regular news briefing on Thursday afternoon, Chinese Foreign Ministry spokesman Geng Shuang said Xi will meet with Maduro and participate in a signing ceremony, but did not elaborate. He said government departments and companies of both countries are now finalizing deals that will be disclosed soon.

Upon a visit to the state energy giant’s headquarters in Beijing on Tuesday, Rodriguez said Venezuela is rich in petroleum and gas, and she hopes the CNPC can expand its cooperation with Venezuela in oil and gas exploration and development, helping the country to increase its oil production, according to industry newspaper China Petroleum Daily.

Venezuela has the world’s largest proven oil reserves, and its oil revenues account for 95% of its exports earnings. According to the CNPC, the Chinese oil company has been working with Venezuela for more than two decades. The Chinese state banks are also providing money to facilitate the cooperation. In 2010, China pledged a 10-year loan of $20 billion to Venezuela to build oil projects, the official Xinhua News Agency reported earlier.

China imported $7.2 billion worth of goods from Venezuela last year, mainly oil and minerals, and exported $1.8 billion of goods, mainly electronics and machinery, according to the Foreign Ministry. The imports were up 29% year-on-year, but exports were down 31%.