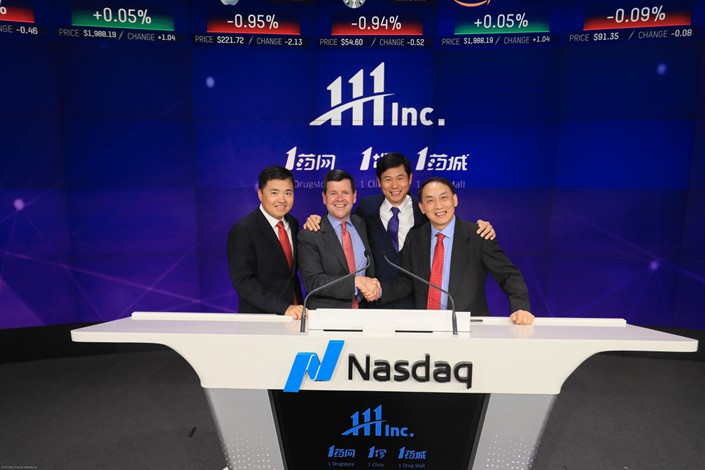 Yu Gang (right) and Liu Junling (center right), co-founders of the online-to-offline pharmacy 111 Inc., pose for photo at their company’s trading debut on the Nasdaq on Wednesday in the U.S. Photo: 111 Inc.

The co-founders of one of China’s early e-commerce hits are optimistic that their online drugstore will be the next big thing as the country’s health care market liberalizes, even after their shares dipped on their Nasdaq debut.

Shares of 111 Inc., which operates an online drugstore and clinic, as well as offline pharmacies, closed down 1.43% at $13.80 on its trading debut Wednesday, below its initial public offering (IPO) price of $14.

“Our focus is on the value creation of our business and we don’t really pay too much attention to short-term stock prices,” Liu Junling, 111’s co-founder, chairman and CEO, told Caixin after the market closed.

Liu and fellow 111 founder Yu Gang saw the way the wind was blowing when China’s e-commerce sector was just taking off back in 2008, setting up Yihaodian, one of the country’s first online grocery stores.

111 was initially Yihaodian’s drugstore before being spun off when Walmart invested in the marketplace in 2011 due to regulatory restrictions on foreign involvement in health care. In 2015, Walmart took full control of Yihaodian before selling it to rival JD.com Inc. a year later.

The company’s name is a pun, as one possible Chinese pronunciation of “111” sounds like the word for medicine repeated three times.

Executive Chairman Yu told Caixin that during the IPO roadshow, one of the questions investors asked most often was about regulation. He told Caixin that is “a super-excellent moment to enter the pharmacy sector” and indicated that there is no plan to sell the company.

The size of China’s general health and wellness market was $1.5 trillion in 2017 and is expected to reach $2.6 trillion in 2022, representing an annual growth rate of 12.1%, and the sector is shifting from a hospital-centered model to a consumer-centered one, according to consultancy Frost & Sullivan.

Several policies are likely to boost the industry, such as the national government’s stipulation that drug sales can’t account for more than 30% of the revenue of public hospitals. The rule was implemented in major cities last year, paving the way for a boom in independent drugstores, and will eventually become nationwide.

Hospitals have traditionally held a monopoly over prescription drug sales, giving them the power to impose markups on prices to boost their revenue and an incentive to prescribe pricier drugs, but an August health ministry document allowed online drugstores to handle prescriptions for some common chronic diseases.

It isn’t the only money-losing company in the industry. Neither of its major online drugstore rivals, Alibaba Health Information Technology Ltd. and Ping An Healthcare and Technology Co. Ltd., have turned a profit.

Liu argued that 111 is differentiating itself from its peers by building an integrated online-offline platform. It not only runs online pharmacies, but also an online wholesale mall that provides medicines to more than 100,000 pharmacies. It was also running 12 of its own branded pharmacies in four Chinese cities by the end of June, according to the company’s prospectus.

But the industry in China is still fragmented and a leader is yet to emerge. According to Frost & Sullivan, the top three retail pharmacies account for 5.4% of the market share in China, as compared with 82% in the United States in 2017.