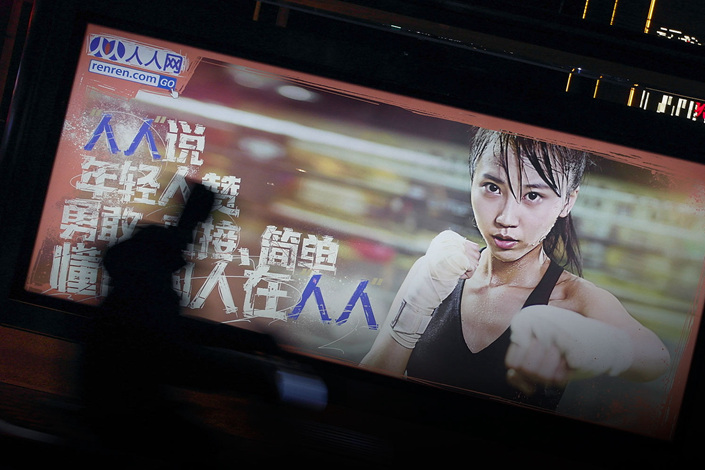 An illuminated board shows a Renren ad in Beijing in December 2013. Photo: VCG

(Sixth Tone) — A decade ago, Sheng Shuwen was one of millions of teenagers logging on to social networking platform Renren to complain about high school and share photos with friends. Nowadays, the 26-year-old bank employee is one of the few still posting on the site.

A few times every month, Sheng returns to her old haunt Renren to nostalgically look through old photos she took with her best friend in college. Nowadays, when Sheng — who lives in the eastern city of Nanjing — logs on, she has to scroll past endless headshots of livestreamers, making it hard to know how to post a status update. In one recent post, she said: “I thought I was getting better at life, but then again I probably would have been able to fall asleep if I hadn’t drunk alcohol and stayed up reading an old novel.” The post attracted zero likes or comments.

“No one is reading it,” laments Sheng, who’s sad that Renren is no longer the same, but is still committed to using it. “It’s talking to yourself — like being in your own little bubble.”

Renren was born in December 2005 as a student-focused platform called “Xiaonei,” or “On Campus.” It was often seen as China’s Facebook: Like Facebook, it began as a campus-focused platform and even shared the same blue-and-white color scheme. For a time, the two platforms were in direct competition, until Facebook was blocked in China in 2009 after the platform was used by Urumqi separatists. Data released in 2009 from O’Reilly Research showed that Facebook had 390,000 active users in China before it was shut down. Later that same year, in a bid to broaden its userbase, Xiaonei became Renren — meaning “Everyone” — and adopted the slogan “Log on to Renren, Find Your Classmates.”

And log on people did. Young fans were drawn to the college-centric pages and in-platform games — including Happy Farm, the precursor of Facebook’s FarmVille. When listing on the New York Stock Exchange in 2011, Renren said it was the largest real name social networking internet platform in China. By the end of 2012, the platform claimed 56 million monthly unique logins and 178 million activated accounts. (By comparison, in 2012, China had 573 million internet users).

But while Renren might once have been the future of social networking, it’s now akin to peering back in time. There’s the clunky design, recalling a bygone era when people communicated solely with text messaging. Then there are the status updates: Many users haven’t disabled their accounts, meaning their emoji-laden posts from a few years back are still there, like time capsules from a different phase in their lives. “I’ve got such a headache,” reads a status from four years ago, which got nine comments.

While its erstwhile rival Facebook topped 2 billion users this year — and even briefly gained permission to launch a subsidiary in China — Renren found its monthly active users sinking ever further. How did Renren’s luck run out?

For many, in the era before swiping right on dating apps like Tantan, Renren was a way to find love. When Beijing-based Xu Zhiheng registered on Renren in 2012, he wasn’t just looking for classmates, as per the site’s slogan; instead, he was looking for a girlfriend. “If some girl visited my page, I would hit on her,” the 24-year-old Beijing University of Chemical Technology graduate recalls. For Zhou Fei, it was a way to track a campus crush she’d spotted in the library. “Only his avatar told me that he was real; otherwise, I would have thought seeing him was only a dream,” the 28-year-old, who hails from central Hunan province, said wistfully.

Joe Ge’s search for Renren romance was less intentional. Like Facebook, Renren had a number of public, college-specific pages, and eastern Jiangsu’s Soochow University was no different. In 2012, his roommate posted on the college’s matchmaking page in a rather public prank: “Joe Ge … is a tall, rich, and handsome guy, with wide-ranging hobbies. He’s history-savvy, modest, and treats people sincerely. He has a burning desire for love, and he’s urgently in need of a woman of any height and weight who’s capable of discussing history with him.” At the time, it just felt like a joke, but these days Ge sees it as embarrassing. “If this [post] leaked out, I would be over,” Ge tells Sixth Tone. “It’s so shameful — a skeleton from my dark past.”

To others, Renren was about something deeper. At university, 31-year-old Meng Chang, who had 4,000 Renren friends and 260,000 views on his profile, wrote for a public page which functioned as an e-magazine. The writers covered current affairs, including controversial issues like the aftermath of the 2008 Wenchuan earthquake. “The circle was quite small — the majority of university students just posted what they ate and drank and cared about nothing else,” Meng, who now works in the media and lives in Beijing, tells Sixth Tone. “Now [the writers] are scattered around the world, but our friendship began with Renren.”

By 2014, the tide had begun to turn against the once-popular platform. Renren’s revenue slipped 43.9% from the year before, while its monthly active users fell from 54 to 44 million. Renren has since attempted to save itself by diversifying into livestreaming, gaming, secondhand car sales, and even — most recently — a short-lived initial coin offering. Although Renren still claims to have 31 million monthly unique logins, the website is no longer the cultural touchstone that it once was. The fall from cultural relevancy has taken a financial toll: Renren recently reported that its operating loss for the last financial year was $87.9 million, larger than the previous year’s $73.0 million. When it first listed on Nasdaq in 2011, its shares were worth $84 — at close of trading Friday, its shares were trading at $1.73.

Nowadays, most people only log on to find embarrassing teenage pictures of their friends or workmates. Even Renren itself acknowledges it’s now steeped in nostalgia. In a lengthy open letter on Aug. 5, titled “Renren’s Future, Defined by You,” the company’s longtime CEO Joseph Chen admitted that in the past few years, the company hadn’t been innovating much and had even struggled with maintenance. On the following day, Renren launched a mini program on WeChat, the ubiquitous social messaging app which boasts over 1 billion users, giving users easier access to their Renren accounts. “Every time we’ve been scolded, we tell ourselves that Renren should turn losses into profits, so that we can at least keep storing memories of people’s adolescent days,” Chen wrote in the letter. When contacted for an interview, Renren pointed Sixth Tone to the CEO’s open letter and did not respond to further requests for comment.

Former user Xu blames the popularity of WeChat for turning people away from Renren. Launched in 2011, Tencent’s WeChat appeared to offer something for which Renren users were increasingly desperate: privacy. If Renren users didn’t set their posts to private, they could be shared by friends to a larger audience, and anyone they were friends with would be able to see the comments and likes on an update. WeChat emphasized direct messaging and only the person who posted the update themselves could see all the comments and likes on WeChat. It became a vicious circle: The lack of young people joining Renren put off those still using the platform, at least according to Xu. “The reason why seniors [at college] were so active on Renren was to show off and hit on girls,” he said. Nowadays, none of Xu’s friends are active users, he said, adding: “I think Renren is already dead.”

Wang Hongdong, senior analyst from iiMedia Research Group, agrees that the rise of other social media platforms like Tencent’s WeChat and Sina Weibo’s microblogging platform was part of Renren’s downfall. After it launched in 2009, Sina Weibo invited many celebrities to open their accounts, helping everyday users interact with their idols. “[Weibo] users were aware that in addition to the latest information, they could also access numerous celebrities, which meant that more and more users joined,” Wang tells Sixth Tone. Tencent’s WeChat and messaging platform QQ were also more innovative than Renren, constantly coming up with new features.

Faced with such competition, Renren failed to nail its branding, Wang said. In 2014, as its prominence began to fade, Renren’s Chen announced a return to campuses, saying the platform would allow users to check test scores, class timetables and cafeteria menus. But it was too little, too late. “It abandoned its original student group and tried to expand to a larger market, but that didn’t really work out. When Renren returned to [users on] campus, it found that students were no longer interested in it,” Wang said.

Wang believes Chen’s public letter last month was about reminding people that the platform still exists, rather than heralding a comeback. “It’s been over 10 years since its peak, and over that period the Chinese internet industry has seen drastic changes,” he said. “[Renren] has already lost its sense of presence.”

But for fellow former user Candy Jiang, it wasn’t the branding or the rise of other platforms — she believes she just matured past Renren. In college, she shared a lot of photos of her life, but after she graduated in 2013 and went to work for a consultancy in Shanghai, her interest in Renren waned. “As we grow older, we tend to talk [online] less,” the 26-year-old tells Sixth Tone. “People don’t want to speak from the depths of their hearts anymore.”