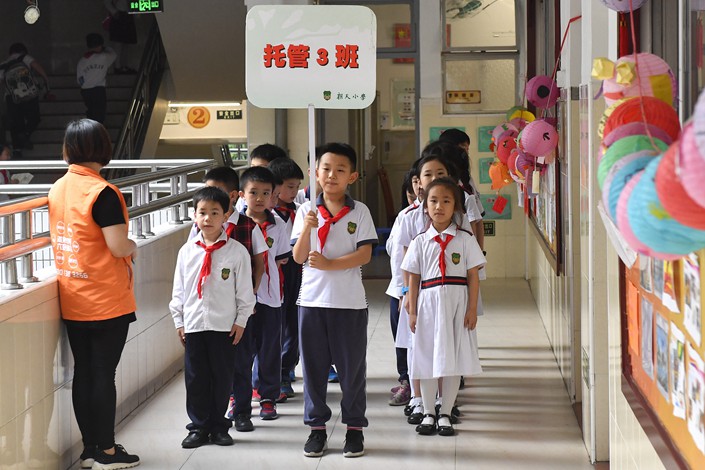 Students walk between classrooms at a Guangzhou primary school on May 2. Photo: VCG

Beijing’s schools have rolled out free after-school programs to curb the growth of a commercial tutoring industry that has been blamed for exacerbating inequality and placing excessive pressure on children.

But parents are complaining that the new after-school classes are a poor alternative to off-campus services, with some children who attend them doing little more than sitting around and watching cartoons each afternoon.

Most elementary and middle school children in China end their school day at about 3:30 in the afternoon, and commercial “schools” have in recent years stepped in to provide after-school care and additional tutoring until parents get off work. These schools often charge tens of thousands of yuan each year for a wide range of classes, including mathematics and music, and families that can’t afford to pay for these programs risk putting their children at a disadvantage in an increasingly competitive education system.

In March, Education Minister Chen Baosheng criticized the “barbaric growth” of the commercial tutoring industry, referring to it as the “3:30 p.m. problem,” and calling for legislation against it. But Beijing’s response to Chen’s criticisms — a pilot program for after-school care at elementary and middle schools that debuted in September — has dissatisfied the city’s students and parents.

Deng Hong, who runs a clothing store, was initially excited about the new program offered at her daughter’s elementary school in Chaoyang district, since it would save her the 2,000 yuan ($291) a month she previously paid for after-school classes, she told Caixin. But her daughter, Yingying, has complained about the program’s poor student-teacher ratio — all the students participating in the program are gathered in one large classroom each afternoon, Deng said.

Another parent, Wang Ming, signed his son up for the after-school program. But just one week into the new semester, teachers began nagging him to take his son home earlier than the official pick-up time of 5:30 p.m., he said. The teachers told him that because it was “getting darker earlier every day, the children were getting hungry more easily.”

Wang relented and has started picking his son up at 4:30 because he thought the “last hour was really a waste of time” — in the second half of each after-school session, students are simply told to watch TV.

Chen Yuan and Lin Hui, two third-graders at a school in Haidian district, have convinced their parents to opt out of the program. Teachers at their school just “watch the class” during after-school sessions, but commercial tutors “give us guidance with homework,” they told Caixin while waiting at the gate of their school for their private tutor to pick them up.

The real problem is that the academic burden placed on China’s elementary and middle school students is too heavy thanks to existing school and examination systems, according to a report by the Beijing-based 21st Century Education Research Institute released earlier this year. The disparity between schools’ teaching quality has exacerbated the situation, the report said.