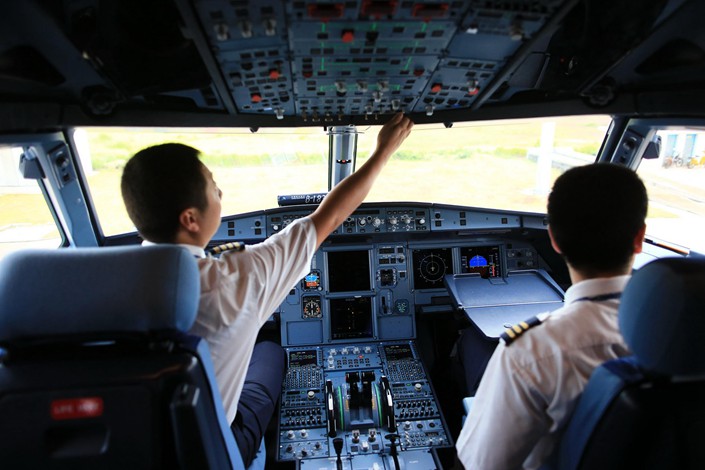 A July 16 article in The Wall Street Journal announced that Boeing Co. and Airbus SE have recently landed $43 billion worth of new orders for airliners, including Boeing’s sale to Xiamen Airlines of 30 new planes at a cost in excess of $3 billion. What’s missing in these headlines is the other half of this story — the looming crisis of a shortage of pilots to operate these planes. In fact, the airlines and manufacturers have projected a global shortfall of 860,000 pilots — a staggering number that doesn’t include mechanics, cabin crew, dispatchers, and other support personnel that would bring the total shortfall into the millions. The pilot shortage is worsening in the U.S., where airlines are struggling to fill crew slots; and in Europe, where a crew-scheduling problem forced low-cost leader Ryanair DAC to cancel scores of flights, leaving people stranded and creating a horrific customer-relations headache. With airlines growing exponentially in China, how will this looming human resources nightmare be handled?

Currently, China sends the vast majority of its flight students to the West for training, where they learn to fly in small planes as part of what’s known as “general aviation,” or GA, which includes all flying except for airlines. This has strained U.S. flight-school capacity and maxed out orders to small-plane manufacturers. It has also been a boon for the used-plane market. A 10-year-old Cessna was sold this week within hours of being listed for nearly the cost of a brand new plane.

Chinese President Xi Jinping has encouraged the development of general aviation as part of its “Made in China 2025” policy, and local governments have been urged to begin manufacturing small planes. This is an important step because you must have small planes and a GA industry to train airline pilots. Without new pilots, airline growth simply cannot go on; however, unlike the West, China has no general-aviation fleet to feed the flow of trained crews.

Sending flight students abroad may solve the crisis in the short term, but what China really needs is a major expansion of flight schools with its own fleet of Chinese-built airplanes. This would serve four purposes: training the flight crews, training the maintenance personnel through shadowing and mentoring during manufacturing; saving time and money; and creating employment in the aviation manufacturing sector. What’s more, there are big profits to be made in selling small planes worldwide. Based on the numbers forecast by Boeing and Airbus, and using the mandatory flight hours required for training, there is a projected market of nearly $2 billion for training airplanes in Asia alone. That’s $100 million per year for the next 20 years.

Despite government support and the huge profit potential, there are persistent obstacles to developing Chinese general aviation. Airfields are being built at a rapid pace throughout the country, but there are few airplanes present. Light aircraft just aren’t being constructed in any meaningful numbers yet in China. Investors make noises about purchasing airplane companies from the U.S., but differences in business culture make it difficult to move forward. In fact, there are U.S. airplane companies available for quick startup and migration to Chinese production. That said, it is difficult to get investors to understand what’s important when entering the small-aircraft manufacturing business.

It’s true that there has been some limited success in China’s entry to producing small planes. They’ve made some good decisions, such as the purchase of Cirrus Aircraft and Continental Motors Inc. These are top sellers, though the production still seems to be very much U.S.-based. On the other hand, there have been investments that aren’t paying off. It’s about cultural differences. Investors want to negotiate a fire-sale price way below market value or to buy the least-expensive product that looks glamorous and is built of what purports to be the latest technology. This way of thinking often leads to a flood of mediocre or even substandard products into the market that may be cheap, but also that perform poorly or could even be downright dangerous.

As an example, a number of so-called “light sport” airplane types that are built to less-stringent standards than the U.S. Federal Aviation Administration’s (FAA’s) “Type Certified” airplanes have been bought or copied. They’re cheap and easy to build, they’re finished attractively, appear to be modern, and the performance figures look good, but they’re just not meant to stand up to the abuse inherent in training flights. What’s more, the accident and fatality rate for these low-cost planes is five times the rate for FAA-certified airplanes. Investing in cheap aircraft solutions is just plain bad economy and won’t help with the pilot shortage in the long run.

This pilot crisis presents a classic business opportunity: a well-defined problem, a clear solution, and big profit potential. If there isn’t meaningful action soon, the inevitable result will be service disruptions, increased risk to the safety of the traveling public, and $43 billion worth of new airplanes sitting idle on the ground.

Wayne Mansfield is the founder of Clear Sky Ltd., an aviation manufacturing business consultancy and brokerage with offices in the U.S., U.K. and Hong Kong. He can be reached at wman@clearskytd.com.