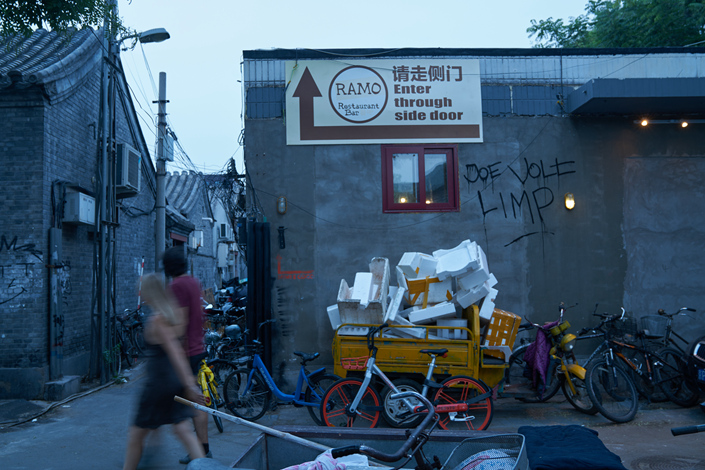 Ramo1. On Aug. 5, 2017, as the original entrance to Ramo restaurant in Fangjia Hutong in Beijing is blocked, customers have to enter through a small doorway on the side. Photo: Liang Yingfei/Caixin

A native Beijinger, Paca Lee has watched the city change throughout her life. But this time was different. In the spring of 2017, a notice appeared on the door of her pizza restaurant.

It stated that the local government would be ‘restoring’ buildings in Beijing historic “hutong” alleyways — many of which date back the 13th century — returning them to their traditional state: gray brick walls with uniform, small windows and only one entrance per “siheyuan,” or courtyard.

Lee’s shop, named Ramo, was as untraditional as it gets. Its funky modern design featured tall, wide windows with lemon-yellow trim, a back entrance leading to a speakeasy bar and even a meter-tall, illuminated winky-face emoji perched atop the roof. These would have to go.

Similar notices also appeared on the doors of Lee’s neighbors — the bar and restaurant owners scattered along Beijing’s popular Fangjia Hutong. Like many other businesses, beer bar Cellar Door was required to brick up its door. It changed its name to Cellar Window.

“When the bricking came, 60% of the businesses (on Fangjia) closed,” Lee says. And while her restaurant was allowed to live on after its facade was bricked, authorities mandated she leave a few months later. “Our licenses were OK. They were legal, but the building was not,” she says.

Today, the once-bustling Fangjia Hutong is quiet. But Fangjia is just one of many formerly lively streets whose businesses have been shuttered en masse amid citywide renovations. Several cities are ‘cleaning up’ neighborhood restaurants — and transforming their nature in the process.

“With so many restaurants closing and reopening, and moving and reopening, we’re finding we’re building much closer relationships with the restaurant owners we visit in order to keep track of them all,” says Garth Wilson, who manages the Beijing branch of UnTour, a company that leads food tours through the hutongs.

But it’s not just the hutongs that have been affected, says Wilson sitting in a restaurant in Beijing’s more modern Sanlitun commercial neighborhood that also had to move after a bricking.

And it’s not just in the capital, either. Dr. Geeta Kochkar has observed similar changes in Shanghai.

“Near Fudan University, there used to be many small vendors selling snacks and small meals,” she says. “But just a year of so back, all of them were removed and now only proper shops can sell.”

Kochkar, who studies Chinese urbanization, spoke with the street’s vendors. “They feel it is a part of rooting out corruption as all these roadside vendors were illegal.”

In reality, authorities across the country clear streets for a variety of reasons. In the hutongs, the authorities cite the need for historical preservation. Elsewhere, the stated reasons are to address sanitation and safety standards — especially when the lower floors of residential buildings have been turned into businesses, often without licenses.

“While this sometimes feels [like] a pity for consumers and a tragedy for owners, it is actually a positive trend,” says James Hawkey, head of retail at real estate services firm JLL China.

“Often, residents have complained about noise late at night, or smells from kitchens below. Or fire authorities have assessed a real fire risk from having restaurants below residential property. So it is often about creating a more orderly, functional market.

Concurrently with the food streets being eradicated, colossal new malls are being constructed countrywide — and they are increasingly home to restaurants. A report by real estate services group CBRE found that, in 2014, food and beverage outlets made up 21% of leases in shopping centers in East China’s Shanghai and Nanjing. In 2016, that percentage was over 28%.

In the e-commerce era, malls benefit from restaurant tenants which help them pivot from providing merely shopping to more full-on experiences. It’s a win-win for restaurant owners looking for a safe address in which to open because these days, Lee says, “you have to be in a commercial building.”

Since her hutong restaurant shuttered, Lee has opened two new Ramo locations: one on a commercial strip in Beijing’s business-friendly Lido neighborhood, and another smaller shop within Chaoyang Joy City, one of the capital’s largest malls.

Ramo has found an especially welcoming home at Joy City. The mall is host to Woodstage, a newly-opened food court in the basement that aims to replicate the feel of a authentic food street. Small businesses operate mini-restaurants and can set up as stalls alongside each other.

Ramo isn’t the only victim of citywide shuttering that has opened at Woodstage. Across from it is Taco Stop, a new project by two Americans whose shop near Beijing’s 13th century Drum Tower was also ‘cleaned up.’

Lee thinks this could be the future of small restaurants in China. “Joy City is really legal,” she says. “It’s either big restaurants, or small ones in the shopping malls.”

Today, Ramo is doing just fine. But Lee’s life has permanently changed. She still lives near the original Ramo location but is not as pleased as before with her neighborhood. “Not only has my business changed, but my lifestyle changed as well,” she says

Lee misses the walks she used to take from her house and the great coffee shop she could stroll to nearby. And when her mother visited recently, she set out on her usual walk — only to return shortly thereafter and say, “Both my breakfast places are gone now.”

Dr. Kochkar finds the rapid, drastic manner of Chinese urbanization concerning. “Chinese cities are increasingly becoming homogenous,” she says. “Which takes away the very essence of city and its own mixed culture.”