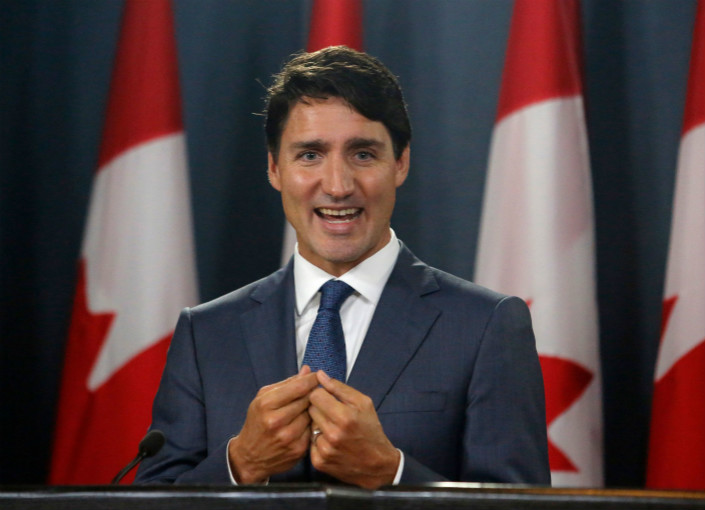 (AFR) — Through all the bluster, threats and grandstanding Donald Trump has done what he promised — get rid of the North America Free Trade Agreement (NAFTA), even if to a large extent in name only.

That sends a powerful message to China — which is starting to show the strains of the deepening tariff war — that the president’s actions are more important than his words.

The speed by which the deal fell into place surprised many analysts and investors, after hopes of a breakthrough faded last week after Mr. Trump unleashed a fresh salvo of criticism and threats against Canadian Prime Minister Justin Trudeau and his trade negotiator Chrystia Freeland.

Instead, Washington and Ottawa have agreed on a reworked NAFTA — to be known as the United States-Mexico-Canada Agreement — which includes key elements from the Trans Pacific Partnership that was dumped by Trump after the 2016 election.

“It provides another example of President Donald Trump backing down from his hard-line protectionist threats in return for modest concessions that allow him to claim victory,” said Andrew Hunter, an analyst at Capital Economics.

“This won’t have gone unnoticed by the EU, Japan or China.”

Speaking at a press conference on Tuesday (AEST), Mr. Trump again said it was still “too early” to talk with China, even though Beijing “wants to talk very badly.”

“They're not ready. Because they have been ripping us for so many years, it doesn’t happen that quickly.”

“If, politically, people force it too quickly, you’re not going to make the right deal for our workers and for our country,” Mr. Trump said.

Former Democrat secretary of state John Kerry urged the Trump administration to build momentum for China to change its ways by recruiting allies such as Europe.

“There’s no question that a tough stance is required on China and is merited — absolutely no question at all.

“The Chinese practices on technology, market access and currency have been damaging to all of our businesses and our economic relationship,” Mr. Kerry told CNBC.

However, he warned that China would not “react well to bludgeoning” and is in a “bigger driver’s seat” than Canada or Mexico because of the size of its economy.

Leaders from the U.S., Canada and Mexico are scheduled to sign the new deal by Nov. 30. It will still need to be ratified by Congress early next year — raising questions over whether a potentially Democrat-controlled House of Representatives will back it.

The breakthrough helped push the benchmark Dow Jones Index up by more than 200 points in early trading, as investors breathed a sigh of relief over an issue that has clouded the vast economic bloc since Mr. Trump vowed as presidential candidate to undo what he described as the “single worst trade deal in U.S. history.”

Key changes include new provisions that will encourage car makers to shift production into countries that pay higher wages; a lowering of barriers against U.S. farmers selling milk, cheese and other dairy products to Canada; and ongoing use of a tribunal for dispute resolution that the Trump administration had tried to remove.

Mr. Trump mocked as “babies” critics including those within the Republican Party of his negotiating tactics and use of tariff threats as leverage.

“Without tariffs we wouldn't be talking about a deal,” he said. “Just for those babies out there that talk about tariffs — that includes Congress, ‘please don't charge tariffs’ — without tariffs, we wouldn’t be standing here.”

With Mr. Trump still needing to win over Congress, he emphasized its benefits to American workers. “We have negotiated this new agreement based on the principle of fairness and reciprocity. To me it’s the most important word in trade.”

Details of the deal suggest the U.S. appears to have granted a major exemption on future motor vehicle tariffs, which Mr. Trump had threatened to slap on Canada if it didn’t sign up. Both Canada and Mexico will now be able to export 2.6 million cars a year to the U.S. tariff-free, which is substantially above current rates.

Another U.S. backdown involved relinquished demands for a “sunset clause” that would have ended the deal after five years. That has instead been set at 16 years, with a review period followed by provision for a six-year extension.

Mr. Trump was particularly keen to emphasize the new title for the agreement.

“I have long contended that NAFTA was perhaps the worst trade deal ever made.

There are no doubt likely to be some surprises hidden in the details, said Derek Burleton, deputy chief economist at TD Economics.

“For example, it appears that the U.S. administration added a provision that would effectively bar any of the three members from negotiating a trade deal with a ‘non-market economy.’ This could hinder Canada’s exploration of an FTA with China.”

Greg Valliere, chief global strategist at Horizon, said a deal between China and the U.S. would eventually happen.

“Trump will portray the breakthrough with Canada as a great victory; that will put fresh pressure on China, which is facing a clear weakening of its manufacturing sector,” he said.

“We think the U.S. and China will be back at the negotiating table later this fall, with signs of progress on market access for key American sectors such as financial services.”

“As Trump and Chinese President Xi (Jinping) engage in personal diplomacy in 2019, fears of a global trade war – one of the very few sources of anxiety for the U.S. stock market – could begin to subside.”