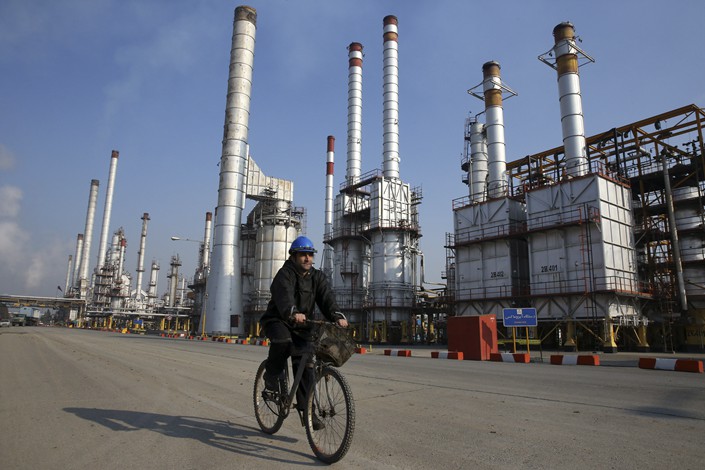 An Iranian oil worker rides his bicycle through Tehran’s oil refinery south of the Iranian capital in December 2014. Photo: IC

China appears to be reducing its imports of Iranian crude oil and turning to Tehran’s Middle Eastern neighbors, despite Beijing’s tough talk about not being cowed by U.S. sanctions.

While China is still the biggest buyer of Iranian oil, imports fell 12.3% month-on-month in September to 442,900 barrels per day, according to data from S&P Global Platts. Several other countries appear have done the same, with Iranian crude exports falling 11.5% to 13.46 million metric tons (14.83 million U.S. tons) for the month, their lowest level since March 2016, according to shipping data company Elane Inc.

In May, U.S. President Donald Trump announced his country’s withdrawal from the Joint Comprehensive Plan of Action (JCPOA), an international agreement intended to freeze progress on Iran’s nuclear program while allowing the country to re-enter the global economic system. The U.S. is set to implement sanctions against Iran’s port operation, energy, shipping and shipbuilding industries on Nov. 5.

The JCPOA’s other partners — China, the European Union, Russia and Iran itself — nevertheless vowed to push on with the plan, announcing on Sept. 25 that they will work to create a payment system not tied to the U.S. dollar that would allow them to take Iranian exports without being affected by U.S. Treasury sanctions.

The continued support does not appear to have reassured Chinese crude oil purchasers, who have looked for alternative supplies from elsewhere, according to Yan Hai, a transportation analyst with Shenwan Hongyuan Securities Co. Ltd. He said that China’s imports of crude oil from Oman were up 10% in September and it also increased Saudi Arabian and Omani oil imports in September, along with increased purchases from West Africa.

Uncertainty also remains over whether China’s state-owned giant China National Petroleum Corp. (CNPC) will take over French company Total SA’s stake in the South Pars gas field. In May, Total said it will pull out of the major Persian Gulf development, expected to cost $4.8 billion, with rumors circulating at least up until September that CNPC will take over Total’s 50.1% stake and add it to its current 30% share. CNPC has yet to make a clear announcement, however.

CNPC is expanding its activities in the region, having signed two deals worth $871 million to develop oil storage and pipelines in Oman and Saudi Arabia in August.