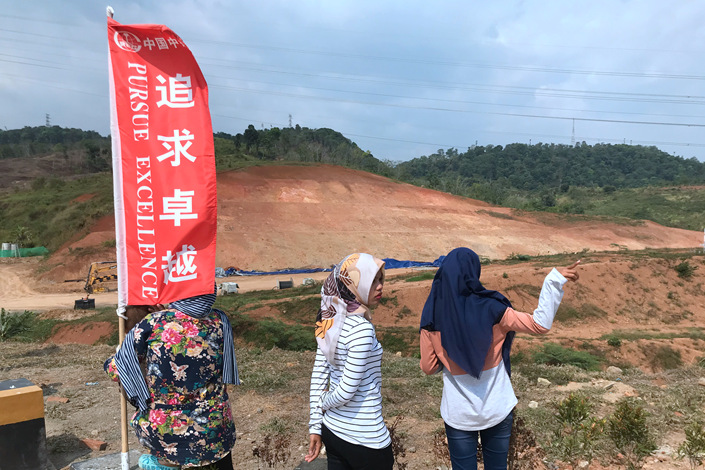 The Jakarta-Bandung high-speed railway will span 142 kilometers (88 miles) when complete, and is expected to cut the journey between the two cities from the current three to five hours down to 45 minutes.

The project was a key part of Indonesian President Joko “Jokowi” Widodo’s strategy in his first term, and Japanese and Chinese companies engaged in fierce competition over the railway. Indonesia awarded the Jakarta-Bandung high-speed rail project to a Chinese consortium in 2015. At the time, the railway was expected to begin operation in 2019 — an important date for Jokowi, as it will be a presidential election year.

In January 2016, Jokowi attended the groundbreaking ceremony for Walini, one of the railway’s four planned stations. But in the two years since the ceremony, not a single meter (yard) of railway track has been laid. An Indonesian worker at the site said that at the moment, only 100 meters of the tunnel has been completed, and that it could take another two or three years to complete the entire tunnel.

When Caixin visited the future site of the Walini tunnel, the Chinese construction employees on the site were unwilling to disclose details of the project’s progress, offering only a terse “It’s still OK.” Nearby residents said that excavation work began to speed up in April, after the China Development Bank granted the first batch of loans for the project.

The railway’s completion date has been pushed back to 2021 amid obstacles that include budget overruns, land acquisition delays and political uncertainty.

“It appears as though nothing has moved forward,” a staffer at the Japanese Embassy in Jakarta told Caixin, referring to the project. “We’re lucky not to be a part of this.” Earlier this year, Indonesia’s government said it will seek Japanese funding for another rail project, a track upgrading project spanning the island of Java from Jakarta to Surabaya.

Acquiring land has been one of the biggest obstacles in the Jakarta-Bandung high-speed rail project.

Around 77% of the land needed for the railway has been secured so far, Chandra Dwiputra, president of Chinese-Indonesian joint venture PT Kereta Cepat Indonesia China (KCIC), told Caixin in September. KCIC was set up by a Chinese consortium led by China Railway and an Indonesian consortium led by state-owned construction company PT Wijaya Karya (Wika) to manage the project.

Indonesian residents have a strong awareness of their ownership rights, and records of land ownership in the country are often outdated or inconsistent, making the land acquisition process exceptionally difficult, Caixin learned from interviews with sources in Indonesia. To make matters worse, speculation has pushed up land prices along the railway’s planned route.

One breakthrough came in July, when the Indonesian air force finally granted KCIC long-withheld permission to use land near Jakarta’s Halim Perdanakusuma International Airport, after KCIC built over 400 residences for the air force. A KCIC representative told Caixin the company hoped to acquire all the land needed for the project by the start of 2019.

But “the last 10% will be the most difficult part,” one Jakarta-based transport infrastructure expert told Caixin.

The projected cost of constructing the Jakarta-Bandung high-speed railway has grown from the original $5.5 billion to $6.1 billion. Personnel from the Chinese consortium said in late 2017 that they expected the project to move forward only if the Chinese government can provide subsidies “because the cost of commodities and labor in Indonesia has doubled over the past two years.”

Additionally, the project’s insurance costs have grown due to insurance companies’ perception that it’s a high-risk project, a KCIC staffer told Caixin.

At the same time, there are concerns about the railway’s profitability. The route between Jakarta and Bandung is relatively short, with tickets expected to cost around 200,000 rupiahs ($13.15), and neither terminus is in a city-center location. Plenty of transport connections already exist between Jakarta and Bandung, the country’s third-most populous city, including express trains and buses.

To increase profitability, KCIC is considering joining up with Indonesian investors to develop property around the high-speed rail stations, KCIC employees said.

It has already been a target of anti-Chinese sentiment, which has a long history in the country. Rumors about the arrival of “10 million illegal Chinese workers” spread on Indonesian social media accounts, and Chinese staff working on the railway made headlines in April 2016 when they were arrested for entering the Halim air force base without permits. And, last year, Jakarta’s ethnic Chinese former governor, Basuki Tjahaja Purnama (also known as “Ahok”), was sentenced to two years in prison for alleged blasphemy.

Neither China nor Indonesia would be willing to cancel the project entirely because the costs that have been sunk into the project are already too great, Siwage Dharma Negara, a senior fellow at the Singapore-based Institute of Southeast Asian Studies, told Caixin.

Events elsewhere in Southeast Asia suggest the railway could still be threatened if Jokowi fails to be re-elected in next year’s presidential election. Malaysian Prime Minister Mahathir Mohamad suspended a high-speed rail project intended to link his country’s capital, Kuala Lumpur, with Singapore in May after returning to power. But it is unclear what action Prabowo Subianto, Jokowi’s strongest rival in the upcoming elections, would take if he were to unseat Jokowi. Prabowo has frequently expressed anti-foreign sentiment, but is also reportedly on friendly terms with the Chinese ambassador to Indonesia, who invited him to a recent Chinese National Day celebration in Jakarta.

“The (Indonesian) opposition may use it to attack Jokowi because it is unclear to the people if it (the project) is beneficial. Also, there was a lack of transparency in how it was granted to the Chinese side,” Negara said.