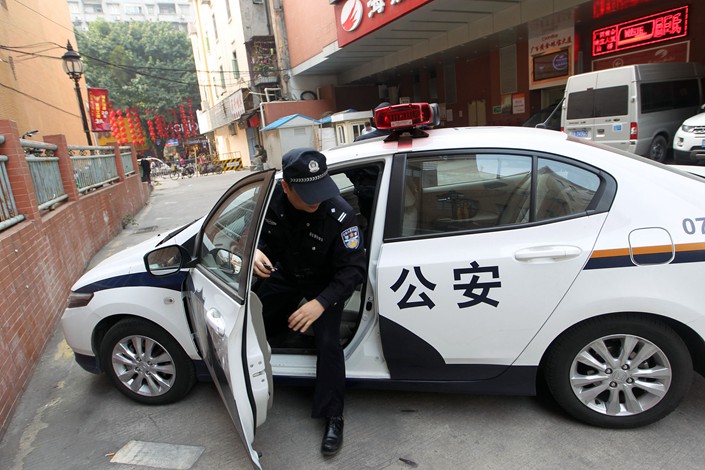 A Guangzhou police officer steps out of his patrol car. Photo: VCG

A lawyer in southern China has accused local police of assaulting her and subjecting her to an illegal strip search.

Sun Shihua had accompanied her client, Li Xiaozhen, to a Guangzhou police station in September to submit a bail application for Li’s husband when police told Sun she would have to mail in the application, Sun wrote last week in a WeChat post (link in Chinese), which has since been removed for “violating rules and regulations.” Li’s husband had been detained for “obstructing police work” after submitting petitions that called for compensation for demolished buildings.

When Sun heard that she would not be allowed to submit the application in person, she asked a police officer, surnamed Chen, for his name and contact details, she said. Chen became angry and thrust his nametag in Sun’s face, and she reached out to steady the nametag so that she could read what it said, Sun said. Chen then allegedly accused Sun of assaulting a police officer, and grabbed her by the neck.

“Sun Shihua’s eyes rolled back and it seemed like she couldn’t breathe,” a woman surnamed Zhang, who witnessed the scene, told Caixin. Zhang rushed to photograph the scene when she saw what was happening to Sun, but police later deleted the photos from her phone, Zhang said.

After the alleged assault, Sun was taken to the police station’s case-handling area, where Chen confiscated her belongings and forced her to remove all her clothing, saying he suspected that she was carrying a weapon, Sun said in her post. The strip search that ensued lasted for over 20 minutes, and Sun was interrogated for a total of six hours that day, she said.

Sun’s WeChat post was widely circulated before it was taken down.

On Wednesday, Guangzhou’s municipal police bureau issued a statement (link in Chinese) denying Sun’s version of events. Sun had arrived at the station with Zhang and a man surnamed was Liang, and the three people caused a disturbance by pulling at a police officer’s nametag, using phones to take photographs, and shouting, the statement said. In response, police summoned the three to the case-handling area, where they were searched and questioned.

The police said they had received a complaint from Sun the next day and had investigated Sun’s claims by reviewing security footage and questioning the officers involved, but found no evidence that police had assaulted or humiliated her.

Zhang and Sun both disputed the police statement when contacted by Caixin. Caixin was unable to reach Liang.

Zhang had never met Sun before they began chatting while waiting at the police station on the day of the alleged assault, and they did not arrive at the station together, Zhang told Caixin.

Both women called for police to release security footage of the encounter between Chen and Zhang.

“The public security organ has brought false charges against me and conducted a humiliating strip search. If I am spreading rumors, I will face huge legal risks and will be sentenced,” Sun said. “If the police believe I am slandering them, they should publicly release the security footage.”

Commenters on Chinese social media echoed Sun and Zhang’s calls for the footage to be released.

If Sun and the two other people named by the police are indeed guilty of having caused a disturbance, “wouldn’t it be a good to release the video and show everyone how aggressive this lawyer was?” Weibo user willchen3000 wrote (link in Chinese).

Yang Huan, a lawyer from Henan province, called for the authorities to “publish surveillance footage to counter rumors,” and “let the truth speak” in a Weibo post (link in Chinese).

Caixin attempted to contact Guangzhou Municipal Public Security Bureau’s spokesperson regarding the security footage, but did not receive a response.

The police have no authority to conduct strip searches on people who don’t already have cases filed against them, Zhang Jianwei, a professor of law at Tsinghua University, told Caixin. “Even if the person is suspected of having assaulted the police, they should still not be subjected to a strip search,” Zhang said.