Two Boatloads of U.S. Soybeans on Their Way to China Despite Tariffs 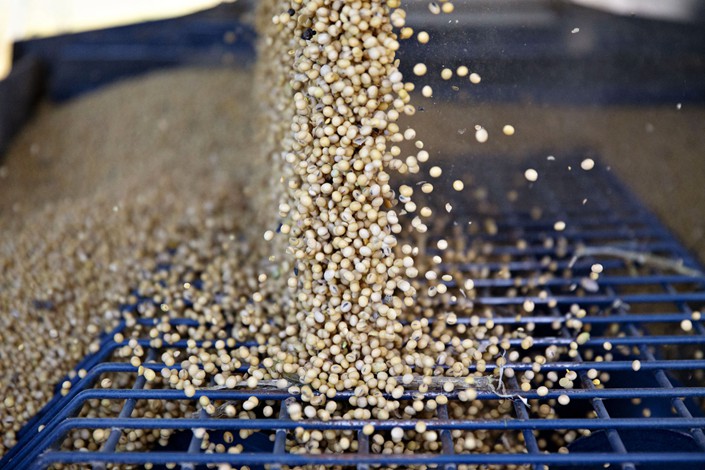 Soybeans are unloaded from a grain truck in the U.S. on Sept. 27. Photo: Bloomberg

(Bloomberg) — Two more vessels loaded with U.S. soybeans have departed for China, signaling that buyers may be getting more desperate for supplies amid the prolonged trade war between the nations.

Star Laura and Golden Empress were loaded during the week ended Oct. 11. Star, which left the Gulf of Mexico, is destined to arrive at China’s Qingdao port at the end of the month, and Golden Empress, which left from the Pacific Northwest, is expected to arrive in December, according to vessel data compiled by Bloomberg. Government data shows 65,431 metric tons of U.S. soybeans were inspected or weighed for export through the Gulf of Mexico that week, and 69,298 tons through Puget Sound.

This is the time of year when China usually turns to buying supplies from the U.S., where the harvest is well underway. After slapping retaliatory tariffs on American soybeans in July, the Asian nation has mostly been buying from Brazil in recent months. Since the marketing year began on Sept. 1, the U.S. only exported about 66,955 metric tons to China as of Oct. 4, according to last week’s export sales report.

South American supplies from the 2018 harvest are now starting to dwindle, and farmers won’t begin collecting the next crop until early next year. That could force some Chinese buying of U.S. shipments.

“China taking U.S. soybeans signals they may not slow down as much as previously expected on their imports before South America comes back online in early 2019,” said Terry Reilly, senior commodity analyst for grain and oilseeds at Futures International in Chicago.

Soybean futures traded in Chicago rose as much as 2.3% on Monday.

“This healthy number, which included a U.S. Gulf cargo and a cargo out of the Pacific Northwest, shows China would rather pay up for soybeans as they clearly need them,” he said. “Refreshing to see China continues to take U.S. soybeans.”