Photo Essay: The Lives of Impoverished Herders in China’s Most Mongolian Region 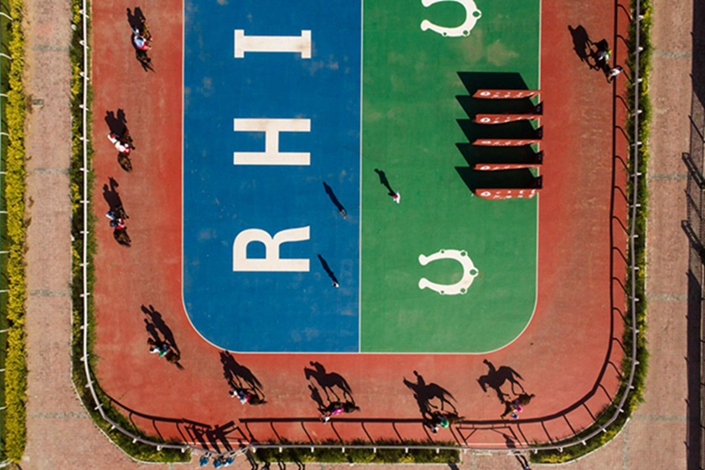 Racehorses are introduced before a race at the Horqin Right Middle Banner racecourse in the Inner Mongolia autonomous region on July 27. This is one of the government-sponsored events as part of the Nadam Fair, which draws hundreds of thousands of local spectators. Guo Xianzhong/Caixin

Horqin’s Right Middle Banner is the southernmost banner of the Hinggan league in the Inner Mongolia autonomous region. It is located to the south of the Greater Khingan Mountains and the northern end of the Horqin Sandy Land. It has a total population of 255,000, 86.6% of whom are ethnic Mongolians — the highest proportion in the whole region. It is also a poverty-stricken area and a key battleground in the national fight against poverty.

As with other parts of the country, causes of poverty here include illness, natural disasters, a small labor force. However, there are also some deep-seated reasons that are quite different — namely, desertification.

Historically, the Horqin grasslands have been described in a traditional folk song describing “grass so tall, only wind reveals the cattle and sheep.” But now, under disastrous desertification, when the wind blows it picks up dust and sand that blots out the sun.

Currently, 53% of land in Horqin Right Middle Banner is desert or quasi-desert. In other words, whether it is for cultivating crops or raising livestock, over half of the local land is now not only unusable, it has also become a nightmare for every herder.

Climate change has unavoidably reduced precipitation, but excessive grazing and unregulated deforestation are clear local contributions. “When I was young, during spring we could see from the village that the tops of the mountains were white — not from snow, but from the flowers of different kinds of wild fruit. It’s a pity that now it’s bare,” said Bai Zhanquan, chairman of the local photographers’ association, who often reminisces about the beauty of times gone by.

Creating prosperity from Horqin’s sand is impossible. The only way to alleviate poverty here is to restore the local ecosystem. Returning grazing land to grassland, returning farmland to grassland, raising livestock in pens, building sheds, improving livestock breeding, expanding the area on which rice is planted, developing ecotourism and so on — the regional government initiatives are committed to restoring the ecosystem and striving for long-term sustainable development. However, despite huge investment, the desertification in the largest of China’s four sandlands, especially the areas around the Horqin Right Middle Banner, has continued at one of the fastest rates in the country.

Destruction can happen overnight, but repair will take several generations of effort. Yet positive signs are already visible: “This year’s grasslands have been the best in many years. The last few years, there wasn’t enough grass to reach the top of a horse’s hoof. This year, the grass came up to the calf,” said Jin Bagenna, a local horse breeder.

Fighting poverty is a complex and lengthy, systemic project. Caixin journalists chose to come to Horqin Right Middle Banner, go among the people of the grassland fighting desertification, select samples and try to use long-term tracking to tell the residents’ stories — their backgrounds; the living conditions of several generations on the grasslands; and the confrontation with their fate, rebuilding nature — and record this arduous journey.

The road was not lonely, and the interviews were only a small part of the “Photographic Witness of the New Era, Focusing on Poverty Alleviation 2018-2020: Large-Scale Impact Cross-Border Research and Creation Project,” jointly initiated by the China Federation of Literature and Art, the China Photography Association, and the Chinese Folk Literature and Art Association. The project has chosen 17 unique locations fighting poverty, gathering a group of 80 photographers, experts in folk literature and art, economists, sociologists, anthropologists and other experts in many areas to enter deep into the grass-roots level of effective poverty alleviation, using photography, paintings, videos, the written word and other integrated media to create a diverse, creative, multi-angle presentation. On Wednesday, International Poverty Eradication Day, the first multimedia exhibition on comprehensive reporting, research and creation opened at the Chinese Literature and Art House Exhibition Hall.

As the initiator of the project, Li Ge, chairman of the China Photography Association, has in-depth thoughts on and unique insights into the images of poverty alleviation. In an exclusive interview with Caixin, Li Ge answered questions about the motivation behind the photography project and modes of collaboration.

Caixin: The poverty alleviation image project is a large-scale project that you coordinated. What is the opportunity and original intention of this project?

Li Ge: As a political journalist of the Central Committee, I participated in the reporting work of the 14th to the 19th national congress of the Communist Party of China, and also witnessed the important development process of poverty alleviation in China. When the China Federation of Literature and Art studied the spirit of the 19th National Congress, I proposed that the photography world conduct a creative research project on poverty alleviation. At the end of last year, we officially launched the “Photographic Witness of the New Era, Focusing on Poverty Alleviation 2018-2020: Large-Scale Impact Cross-Border Research and Creation Project.” The project has also been listed as a creative project of the Central Publicity Department’s “China Contemporary Literature and Art Creative Work Project Plan (2017-2021)” and as a project under the Chinese Literary Federation’s “Acclaim the New Era, Build the Chinese Dream” theme.

In the second half of last year, after the founding of the new presidium of the China Photographers Association, we discussed the direction, methods and themes of photography. For example, in the photography world now there is a phenomenon of shallowness. A variety of photographic activities are endlessly emerging and on a grand scale, but I feel that much of this so-called creative behavior is superficial; so-called works merely follow a trend; are imitations; or are simply in pursuit of beauty in form and don’t even have any ideological feeling or point of view. Through this kind of special, creative poverty alleviation research project, we will transform a creative concept, cultivate a way of approaching work, so that more photographers steadily take root in people and villages at the grass-roots level. Only when you really understand the subject’s family situation, historical evolution, ideological roots, and emotional expectations can you build a true heart-felt friendship and shoot more temperate works.

You said at the summary seminar that this project is more than just a superficial article, aiming to avoid condescension and instead emphasize the spirit of “speculation and revealing.” How do you understand “speculation” and “revealing”?

The word “speculative” concerns the direction of creation. Nowadays, many photographers still have a superficial understanding of documentary photography. They think that documentary photography is simply photographing daily life and people, without any later-stage image processing. This is an enormous misjudgment. True art must be supported by the artist’s thoughts, viewpoints and attitudes, not by a deliberate hunt for an exotic subject or the blindness of the technique of expression.

What kind of thinking can support your artistic creation and make your work prolific? I believe the core is to have an independent ideological system and speculative ability. Photography must not simply dazzle people with beauty to win awards, nor can it rely on excessive consumption of other people’s suffering or invasion of privacy to get applause. What is more important is to see the depth of the author’s independent thinking and the degree of social relevance behind the image. So though some works seem to be “in a silent place,” in fact, in the background there is an ear-shattering thunder that passes on strong spiritual power and energy and contains great social value.

Another change this time is from one single reporter to the cooperation of an integrated media team to produce photography, video, voice recordings and text. How do you see this kind of transformation?

At the moment, integrated media has brought about dramatic changes in the form of communication. It requires you to be versatile. You must write well, but you must also take good pictures and video. This is certainly a good thing for a media practitioner to master multiple technologies. But in the process of specific news reports and artistic creation, you will find that if you do everything, you may not do anything well. Therefore, we still hope that the industry has specialization — when doing static images, we will concentrate on making the best static images. If we shoot video, we will take the best video. When a team conducts an interview across multiple mediums, it becomes multidimensional and gives those who care about social development more space to watch and think. At the same time, it also provides a platform for learning and communication for the main creators in the team. For example, on our team we have economists who create unpredictable sparks when joined with photographers. Collisions between creators of video and still images can also result in an explosion of inspiration. Of course, there are also problems of learning to accommodate each other, reaching mutual understandings and cooperation. After all, it is very difficult to work with so many different resources at once and create something meaningful.

What role do you think the poverty-alleviation image project can play in the process of poverty alleviation?

I think there are two roles. One is supplementary, providing images and text about concrete poverty alleviation work. Through the investigation and creation of this project, it can provide multiple angles for cadres and policymakers on the front lines — an accurate, objective basis. For example, as a reference point, from the sidelines we can explore whether the effect of poverty alleviation is good or not and help them appropriately amend the direction of their work. Another long-term consideration — we strive to document the achievements of the next three years of this special stage in the new era of building a well-off society in the national archives for history and future generations to judge.