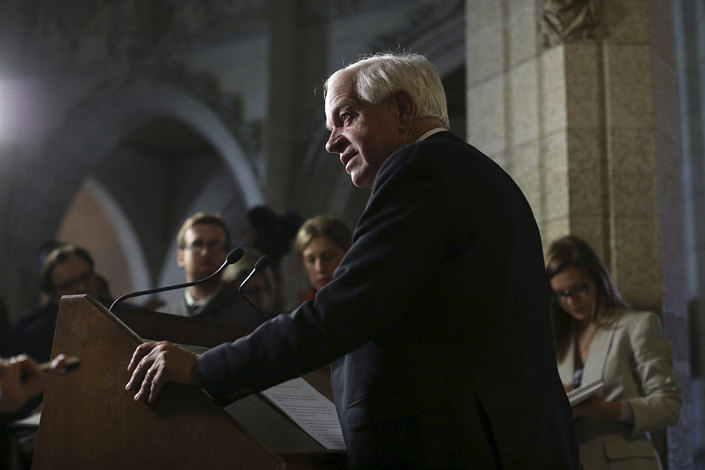 Canada won’t let disagreements get in the way of its growing trade relationship with China, the country’s ambassador told Caixin.

In an interview last week, John McCallum expressed his country’s enthusiasm for a free trade agreement (FTA) with China. He also described the difficulty of negotiating with U.S. President Donald Trump’s administration, at a time when both China and Canada are facing trade friction with the U.S.

The nations have been discussing a possible FTA since 2016, but negotiations have stalled since talks held last December, at which the two countries disagreed over Canada’s Progressive Trade Agenda, a plan aimed at boosting social and environmental development. The FTA has also faced opposition from domestic critics, including Conservative Party leader Andrew Scheer and left-leaning environmentalist group Council for Canadians.

The two countries have had differences when it came to the environment, labor and gender chapters of the agenda, but these are now “water under the bridge,” McCallum told Caixin. While there remain fundamental disagreements in areas such as human rights, they do “not stop us working very closely with China to do more on trade and other areas,” he said.

With Canadian Prime Minister Justin Trudeau expected to visit in December for this year’s annual talks with Chinese Premier Li Keqiang, hope is growing that official negotiations could begin.

“It always takes a long time to negotiate an FTA,” McCallum said. “It took China and Australia 10 years. I hope it will take Canada less than 10 years, but right now we’re going sector by sector, and I think that will build momentum and the building blocks for a comprehensive agreement down the road.”

The process has been complicated by the recent renegotiation of the North American Free Trade Agreement, now called the U.S.-Mexico-Canada Agreement (USMCA). The USMCA includes a clause allowing the trade pact to be dismantled if any partner signs a free trade agreement with a “non-market” country, a category widely interpreted to include China.

Nevertheless, China and Canada’s mutual support for the Paris Accord to fight climate change and for reform of the global trade system provide a substantial foundation for trade talks, the ambassador told Caixin. He added, “I think every signal we’ve received from the Chinese is enthusiasm to move forward, every signal I’ve received from Ottawa is to move forward, so I think we’re on the same page.”

One signal of Canada’s enthusiasm for FTA negotiations is its efforts to diversify trade. In July, Trudeau changed the name of the Ministry of Trade to “Department of Trade Diversification.”

“Just by the arithmetic, trade diversification has to include China,” McCallum said. “China has the world’s second-largest economy, and at some point will be the largest, so any country looking to diversify trade will obviously look to China as part of that process.”

Both countries will benefit from greater investment in sectors such as agriculture, energy and green technology, according to McCallum.

McCallum suggested that Canada could present to Chinese investors a package of projects that have been vetted by state security, to avoid any repeat of past “bad surprises,” such as the attempted Chinese takeover of construction company Aecon, which was blocked over concerns that it would allow Beijing access to sensitive infrastructure data.

“We welcome Chinese and overseas investment in many sectors, but not quite everywhere,” he said, adding, “China has its own negative list, so we should reciprocate and have a similarly clear system.”

With regard to the USMCA, which was finalized in October, McCallum said that Trump’s negotiation style was “unusual.” He did not play down the difficulty of the negotiation process, saying that Canada had to stand its ground on a few issues to reach what he called a “decent agreement.”

McCallum was particularly enthusiastic about Canada’s platform at the inaugural China International Import Expo, which opened in Shanghai Monday. Canada’s participation in this year’s expo is based on the theme “healthy living,” McCallum said. Canada is showcasing innovative green technology and will feature 20 Canadian companies from the seafood, education, and tourism industries.