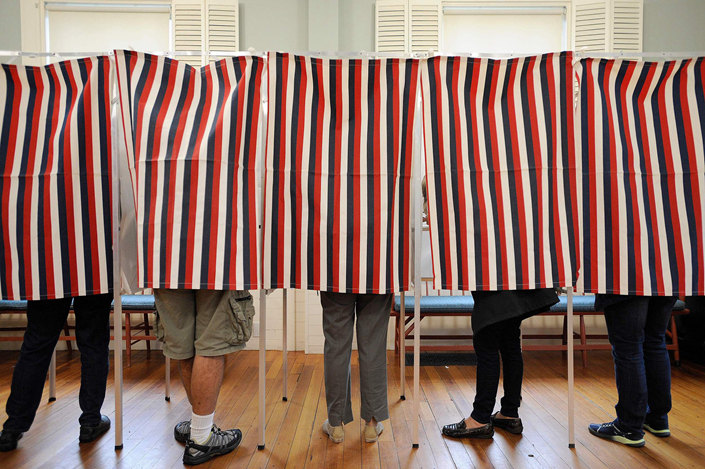 U.S. media were forecasting within hours of polls closing in that country’s midterm elections on Tuesday that Democrats will gain a majority in the House of Representatives, while Republicans will strengthen their majority in the Senate.

However, the shift in power in Congress is unlikely to cause any softening in U.S. policy toward China, analysts told Caixin.

“(The) perception of China as an economic and security threat, and in some circles an ideological threat, has been spreading through both parties,” said Douglas Paal, vice president of studies at the Carnegie Endowment for International Peace.

This view has also taken hold beyond Congress. In testimony to the Senate Intelligence Committee in February, FBI Director Christopher Wray said, “One of the things we’re trying to do is view the China threat as not just a whole-of-government threat, but a whole-of-society threat.”

There is also evidence of bipartisan support for the $250 billion in tariffs on Chinese goods imposed by U.S. President Donald Trump, though Congress has no say in the matter. In March, House Minority Leader Nancy Pelosi, the California Democrat who is likely to return to her former post as House speaker in January when the new Congress is sworn in, released a statement expressing support for the measures. Democratic Senator Sherrod Brown of Ohio, who won his re-election bid, has also been a vocal supporter of the measures.

“I think the fact is that the Democrats are more sympathetic to President Trump on trade than many Republicans,” David Wessel, director of the Hutchins Center on Fiscal & Monetary Policy at the Brookings Institution in Washington, told Caixin. “So I don’t think pressure from Congress will lead the president to temper his hostility on trade.”

Meanwhile, three Democratic House candidates running in regions affected by the trade frictions and who had voiced opposition to the tariffs lost their elections. Many analysts told Caixin that American voters were more likely to cast a vote on domestic issues — such as immigration, health care, and tax cuts — than on foreign policy issues.

However, Chinese academics retained a measured optimism about the election results and the future of Sino-U.S. relations.

“It could divert Trump’s attention from the trade war and restrain his ability to escalate it further,” said Tu Xinquan, the executive dean of the China Institute for WTO Studies at the University of International Business and Economics in Beijing. “This would make it possible to reach a deal that calms the trade tensions between the two countries.”

Jia Qingguo, professor and associate dean of the School of International Studies at Peking University in Beijing, was hopeful that the upcoming U.S.-China Diplomatic and Security Dialogue, set to begin on Friday after being delayed last month, will provide some stability for the increasingly tense China-U.S. relationship. “I believe that both sides don’t want the trade and economic friction to spread to other parts of the relationship,” he told Caixin.

He also expressed hope that a potential meeting and dinner between Trump and Xi at the G-20 meeting in Argentina at the end of the month could pave the way for a resolution of the trade frictions.

“It’s possible — though not highly likely — that the scheduled meeting between Xi and Trump could start positive movement,” said William Zarit, chairman of the American Chamber of Commerce in China.

“But whether or not some sort of ‘deal’ is declared before the end of the year, the changes needed to truly address the underlying issues in the U.S.-China economic relationship are far more significant than can be realized over dinner and drinks,” he added.