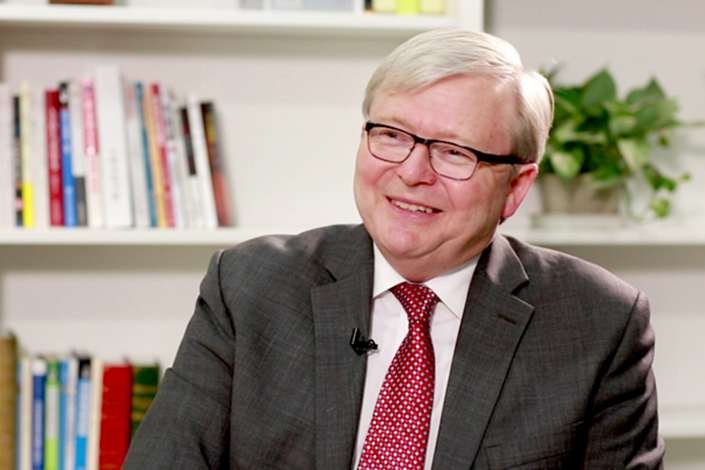 China has achieved a lot over the last 40 years.

I remember the China of 1978 because in that year I was studying Chinese at Australian National University. The Cultural Revolution had just concluded. Deng Xiaoping had just returned to the leadership.

At university, we began to study Deng Xiaoping’s axioms: “Seek truth from facts,” and “Practice is the only criterion for testing truth.”

After more than a decade of pure ideology, these were welcome sounds to the rest of the world. China, at last, had embarked on a period of reforming its domestic economy based on the fundamental disciplines of price theory. And opening its economy to international markets and raising its own people out of poverty.

By the time I first arrived in this country to work in 1984, it had already been five years since the Third Plenum.

Indeed, the first document I remember reading when I was in the Australian Embassy that year was the Third Plenum of the 12th Central Committee of the Communist Party of China (CPC) in November 1984, on what was then called “urban reform” — taking the principle of price-based reform of Chinese agriculture, and beginning to apply it to the rest of the Chinese economy.

China, from the earliest days, has had to deal with the inherent tension between market prices on the one hand, and state planning on the other.

There is also a tension between full market prices on the one hand, and the role of state-owned enterprises (SOEs) on the other.

Market prices are about the efficient allocation of resources in the economy, where the principal actors are private firms and individual consumers.

By and large, SOEs have a different social and political purpose.

This is the core lesson of the last 40 years.

The importance of market prices for the future

The discipline of market prices as the efficient allocation mechanism for scarce economic resources is not just an important historical principle.

It must also be a guiding principle for the future.

That is why the decision outlined by China at the Third Plenum of the 18th CPC Central Committee in 2013 is so important in the eyes of the world.

We all remember what that decision said: “Allow the market to play a decisive role in resource allocation.”

I know enough about Chinese domestic economics and politics to know how complicated that decision must have been in 2013.

That decision reflected the domestic consensus within this country on the best resolution of the tensions between the two traditions alive in modern Chinese economic theory and practice: that is, market prices driving the growth of private firms on the one hand, and state planning driving by the continuing role of SOEs on the other.

Indeed, when we foreigners analyzed the 60 sets of reforms in the 2013 “Decision,” the core guiding principle underpinning all of them was the central importance of market prices.

For China’s future, this is important for the growth of its product and service markets.

For market prices to work in the agricultural sector, the manufacturing sector, or the services sector, there must be strong competition.

And for there to be strong competition, there must be competitive neutrality.

And for there to be competitive neutrality, the same rules should be applied to Chinese private firms and SOEs as apply to foreign firms.

That’s why five of the most critical areas in the decisions of the Third Plenum of the 18th CPC Central Committee were competition policy reform, SOE reform, foreign trade reform, foreign investment reform, and financial sector reform.

In the West, we call this creating a level playing field through the creation of a set of rules and regulations, so firms can compete equally to produce the best product at the lowest price for the consumer, thereby representing the most efficient allocation of resources and thus eliminating waste.

If we look around the world today, we see the most successful economies over time are usually the most open and competitive economies.

Just as we see around the world, the most poorly performing economies are those most closed and overregulated, creating advantages for one sector or another.

The role of market prices in the financial sector

This same logic also applies to the financial services sector.

For those who save, their interest rates should be driven by market pressures, so they have a proper incentive to save with an attractive rate.

Similarly, some consumers may need credit to purchase essential goods and services for themselves and their family. They should get the best rates and conditions possible on the market.

Just as for individual firms, either public or private, for them to grow in a sustainable fashion, they too need to have access to capital at a competitive rate.

Interest rates applied to individual loans should also price the risk associated with that loan, in order to discourage entrepreneurs from building businesses that do not have a strong market base.

Ten years ago, we saw this in the global financial crisis, which started in the United States. Indeed, this is a problem where asset bubbles emerge in any economy.

That is why, for example, China’s current policy of “deleveraging” is important for the long-term stability and prosperity of the Chinese financial system, and the general economy.

Deleveraging is always a painful process in any economy.

And we all agree — the best thing to do to avoid deleveraging problems in the future is to apply market discipline to manage credit supply in the first place.

The continued role of regulation

What I have said today about market prices as a principle in the economy doesn’t mean there is no future role for economic regulation, legislation, or other national policy priorities.

All countries create regulatory and legislative structures that maximize their definition of public goods.

First and foremost, this is to prevent markets from completely spiraling out of control, as happened during the global financial crisis.

That’s why, through the G-20, we agreed on a whole range of financial regulations worldwide, to prevent the risk of future financial crisis.

Of course, there are other reasons to support government legislation and regulation of markets as well.

And that is to make sure governments can create proper public goods: health, education and welfare.

Free markets do not naturally provide these things.

That’s why government must intervene, so that people with lower incomes have equitable access to these critical public goods.

But each time governments intervene in markets, either to regulate those markets, to prevent systemic risk, or to provide for other forms of state intervention to fund and deliver other public goods, there will always be an economic price to pay in terms of the optimization of resources.

That’s why the government should always weigh carefully the net impact on overall economic efficiency when considering each individual decision to intervene in markets.

In China’s case, SOEs can “crowd out” the ability of private firms to sell their goods and services, thereby impacting the efficiency, living standards, and sustainable employment across the general economy.

Furthermore, if administrative decisions do not allow competitive access to finance for private firms to grow their businesses because SOEs have preferential access to capital, then, once again, overall economic efficiency will be affected, and overall living standards will be reduced, just as individual private firms will employ less people.

China has made remarkable progress in the past 40 years.

But the international lesson for all of us, who are in the hard business of market reform, is that the process of reform does not stop.

It is a continuing process.

The uncomfortable truth for all of us is that when market reforms stop, often for understandable political reasons, it soon affects economic development, living standards, and sustainable employment.

It has also faced other economic challenges for its growth as well. This has included the continuing debate in China on the best balance within this country between the rights of private entrepreneurs on the one hand, and the rights of the party and state on the other.

A third factor influencing the growth environment has been China’s deleveraging campaign, which has needed to be implemented for macro financial management reasons.

Then of course there are further factors arising from the emerging U.S.-China trade war.

Nonetheless, the impact of the trade war has been negative on both global and Chinese business sentiment.

And this may also flow to China’s economic growth over time.

For these various reasons, it has been important in the last few weeks to see the series of definitive statements by President Xi Jinping and Vice Premier Liu He on the central importance of private firms for long-term sustainable economic growth, employment, and improved living standards.

Chinese private firms will need to have confidence in terms of their future competitive status in relation to Chinese SOEs.

This will have particular implications for the future of China’s domestic finance industry. Not just banks, but also the new array of other delivery platforms for financial services right across the Chinese economy.

China’s economic future will be determined in large part by who the next Alibabas, the next Tencents, or the next Haiers will be.

Of course, that rests on the ability of China’s domestic economy to be served by an efficient financial services industry that delivers financial capital on a competitive basis to individual businesses and consumers.

And then there is a wider question of China becoming a bigger provider of financial services to the region and the world.

That’s where China will need to fully implement the financial industry reforms articulated in the Third Plenum of the 18th CPC Central Committee.

Ultimately, the question of the future liberalization and convertibility of China’s currency, and the opening of its capital account is a sovereign decision for China itself.

There are both risks and opportunities involved in these large decisions.

In Australia, we did it back in 1983. And by and large, it has worked well, both for our financial services industry, and for our overall economic prosperity.

Nonetheless, each country is different. With different political circumstances. But these questions do ultimately shape the ability of countries to become global financial centers.

Our general experience in Australia is that greater foreign competition in our domestic financial industry has delivered a more-competitive financial services sector for Australian businesses and consumers.

Proper financial regulation can prevent any systemic risks arising. But proper regulation should not be used as a form of protectionism for local industry.

Kevin Rudd was prime minister of Australia (2007-10, 2013) and is president of the Asia Society Policy Institute and chairman of the International Peace Institute. The article is an excerpt of a speech he gave at the second Qiantang River Forum in Hangzhou, Zhejiang province, on Saturday.