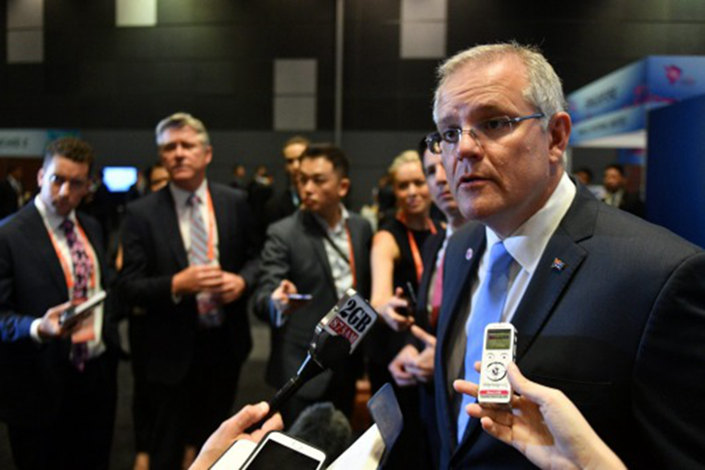 Australian Prime Minister Scott Morrison insisted at the 2018 ASEAN Summit in Singapore that his recently announced Pacific pivot was not aimed at pushing back at China. AAP

(AFR) — Prime Minister Scott Morrison has rejected suggestions by Beijing that Australia is adopting a Cold War mentality and trying to block China from exerting influence in the Southwest Pacific.

With impoverished Pacific nations set to become beneficiaries of a bidding war between China and Australia and her regional allies as they vie for strategic influence, the Prime Minister insisted his recently announced Pacific pivot was not aimed at pushing back at China.

"That's certainly not the spirit of which we've entered into this new initiative," he said on the sidelines of the East Asia Summit in Singapore, and ahead of a meeting late last night with Chinese Premier Li Keqiang.

"We're not doing that to the exclusion of others. When I made the announcement ... I talked about working with a whole range of different nations within the region to advance the prosperity and stability of the Pacific."

The pivot included A$3 billion ($431 million) in infrastructure loans and grants and five new diplomatic postings. This was in addition to a separate trilateral infrastructure initiative involving Australia, the United States and Japan, which is a rival to China's Belt and Road Initiative and will be road tested at this weekend's Asia-Pacific Cooperation summit in Port Moresby. Both have prompted a testy response from Beijing.

On Tuesday, China's Vice-Foreign Minister Zheng Zeguang, in comments widely interpreted as being aimed at Canberra, said the Pacific region was "not any country's sphere of influence" and "everyone should jointly help the island nations."

"We hope that relevant parties can objectively and positively view China's relations with Pacific island nations, and earnestly abandon outdated concepts of Cold War thinking and zero-sum games, and do more to benefit the island nations' development and improvement of livelihoods and regional peace and stability."

Li was more diplomatic, telling Morrison their meeting "is a turning point after our ups and downs in relations."

He spoke of the need for "equal-footed cooperation" and a "need to approach our relations with a view of mutual benefit."

Already this year, Australia has intervened to fund an undersea internet cable linking the Solomon Islands to Papua New Guinea and Australia, rather than let Chinese telecommunications company Huawei build it. And Morrison has promised to fund the upgrade of the Lombrum naval base in Manus Island, Papua New Guinea.

At APEC this weekend, Australia in conjunction with regional allies New Zealand, Japan, South Korea and the U.S. will promise funding for electrical and internet connectivity across Papua New Guinea.

Chinese President Xi Jinping, who will attend APEC, is also preparing to open his wallet to fund mining and energy investments.

While in Papua New Guinea, Xi will meet the leaders of Papua New Guinea, Fiji, Vanuatu, Samoa, Micronesia, the Cook Islands, Tonga and Niue, the same countries the Pacific pivot and the broader trilateral infrastructure initiative are targeting.

In Singapore on Wednesday at the East Asia Summit, Morrison used bilateral talks with regional leaders to advance plans for APEC. This included a meeting with New Zealand Prime Minister Jacinda Ardern, who Morrison said was part of the "Pacific family."

"Both New Zealand and Australia have always been engaging with our Pacific family and we're just taking that to a whole new level," he said.

Sources said less progress was being made with attempts to restore the Quadrilateral Security Dialogue, a forum established during the government of Prime Minister John Howard, which collapsed in 2008 when the newly elected Kevin Rudd government withdrew under pressure from China. It was reconstituted in 2017 at the behest of the U.S. and Japan to counter Chinese influence and on Wednesday it held its third meeting, involving officials.

However, India is a reluctant participant and Morrison used a meeting with his Indian counterpart Narendra Modi to spur him on.

"It remains an important sort of architecture in the region for us and the interoperability, the connectedness on our operations and the things we do, both in the economic and the strategic side, will remain important to our engagement with the region," Morrison said of the dialogue.

Before flying to Singapore, Morrison told The Australian Financial Review that Australia would co-fund an infrastructure venture with China if it were for the common regional good.

And on Wednesday, he struck a conciliatory tone over the South China Sea by declining to back U.S. calls for China to pull its missiles off disputed territory in the Spratly Islands.

But China's state-owned media is skeptical of Morrison's attempts to end the thaw with Beijing.

"Quite a few Chinese scholars have questioned their (Australian politicians') sincerity, suspecting that seeking to mend fences with Beijing is an expedient move by the ruling party's leaders to woo voters from Australian business, agriculture and animal husbandry sectors who can benefit from economic cooperation between the two countries," Yu wrote.

"They worry that China's affirmative response will only allow Australian politicians to take advantage of Beijing for political gains. If that is the case, it will not help the two sides achieve lasting and healthy relations; it will also be unfair to other political parties participating in the Australian vote. China's goodwill and trust shouldn't be used for nefarious designs by unscrupulous Australian politicians."

This piece was originally published by The Australian Financial Review