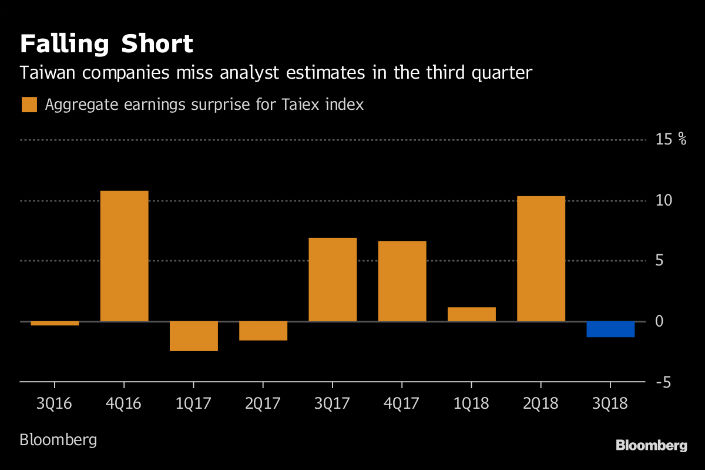 (Bloomberg) — Disappointing earnings may not be over for Taiwan companies, dragged by waning demand for Apple Inc.’s flagship iPhone and deteriorating relations between the island’s two biggest trade partners.

Net income for companies on the Taiex index is expected to drop 9.2% year-on-year this quarter after undershooting estimates in the three months through September, the first miss since the second quarter of 2017, according to data compiled by Bloomberg.

In a market where semiconductor firms account for more than a quarter of the benchmark’s weighting — Taiwan Semiconductor Manufacturing Co. alone accounts for 21% — the performance of tech giants like Apple can sway earnings. Suppliers including Hon Hai Precision Industry Co. saw disappointing profits after Apple reported stagnant iPhone sales and a worse-than-expected revenue forecast.

Sino-American tensions have continued to simmer. U.S. Vice President Mike Pence said during the weekend that the U.S. wasn’t in a rush to end the trade war and would “not change course until China changes its ways.”

Signs of a slowing economy have emerged of late, with the island’s exports rising at a slower-than-expected pace in October. Several board members of the central bank saw the need to consider interest-rate adjustments so that Taiwan has sufficient flexibility in monetary policy in face of a future global economic slowdown, according to its meeting minutes released earlier this month.