Opinion: Will China Take Spain’s Side in Dispute Over Gibraltar? 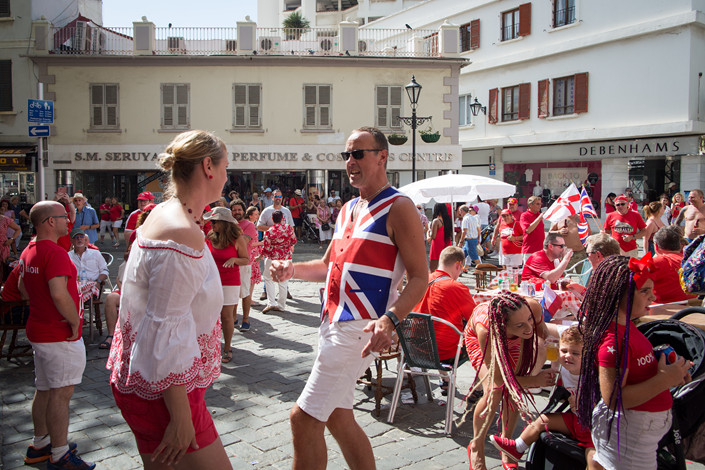 People sing and dance outside a bar on Gibraltar National Day on Sept. 10, 2018 in Gibraltar. Photo: VCG

Brexit has opened a window for greater Spanish influence over Gibraltar, the return of which has been one of Spain’s long-sought goals. President Xi Jinping’s visit to Spain on his way to Buenos Aires at the end of this month will result in the usual and necessary flurry of declarations about strengthening bilateral relations centered on trade as well as discussions on how Spain might support China’s diplomatic initiatives in the EU.

However, what is intriguing and worth watching is how the Gibraltar question plays out, and whether China will take Spain’s side in resolving this long-standing territorial tussle with the U.K. Because the Strait of Gibraltar is of vital commercial and military importance, this can also be a lens through which bigger geopolitical questions involving the Mediterranean Sea can be brought into focus.

In describing the American South, William Faulkner said, “The past is never dead. It’s not even past.” In some ways, this is even more true of Spain. Spain was one of the first transoceanic colonial empires, and its conquests and the flood of silver it unleashed on Europe has had a profound and continuing impact on today’s world. Besides the cultural and political legacy left from Mexico to Argentina and the Philippines, this has also resulted in Spanish being the second-most spoken first language in the world (after Chinese).

In quite a direct historical sense, Spain is also responsible for China’s difficulties with the U.S. today. For had not King Philip II failed in his attempt to overthrow Queen Elizabeth I by too-hastily launching the Spanish Armada in 1588, Spain most likely would have maintained and consolidated its dominance of the Americas, North and South. Instead, England supplanted Spain in North America, and the rest, as they say, is history. And in 2018, China is left confronting the Anglophone diktats and threats from this set of former British colonies.

Bab-el-Mandeb and the straits of Malacca, Hormuz and Gibraltar are four of the world’s vital maritime chokepoints for both trade and war. The Strait of Gibraltar separates Europe from Africa and is less than 9 miles wide. Spain, with or without Gibraltar, straddles the strait with European Spain on the north and the African enclaves of Ceuta and Melilla on the other side. This makes Spain the only European country with a physical border with an African country (Morocco). Not surprisingly then, as other European countries restrict the flow of refugees, Spain is emerging as the path of least resistance and a likely new flashpoint in this crisis. Given the growing importance of Africa to China, China may sooner or later need to confront this issue in a more-visible manner.

The Strait of Gibraltar is also the western gateway from the Atlantic Ocean to the Mediterranean Sea and the countries abutting it, from France to Greece, and Israel to Turkey. Because of this, access to the Mediterranean is of immense practical and symbolic importance. As the U.S. seeks to re-create its version of “the Great Game,” with China and Russia cast as its antagonists, these Mediterranean rim states will become increasingly consequential.

Energy security has been the primary national security motivation for China’s maritime agenda. Thus, the establishment of its first overseas military base in Djibouti and efforts in the South China Sea address the Bab-el-Mandeb and Strait of Malacca through which much of China’s energy supply must pass.

However, as China’s interests become increasingly global and the world gets drawn into this new Great Game, it is perhaps inevitable that the Strait of Gibraltar becomes a geopolitical focus for China. But just as the U.S. sees the Belt and Road Initiative as a threat to American influence and has responded with its own plans for meeting the infrastructure needs of previously ignored countries, Spain may also become the recipient of more attention from the U.S. with whom it has a love-hate relationship dating back to the Spanish-American War of 1898, and Spain’s subsequent loss of Cuba, Puerto Rico, Guam, and the Philippines.

While the G-20 may capture the world’s attention, Xi’s trip to Spain should not be overlooked. As the Great Game gets underway, past may again be prologue. Spain and the Strait of Gibraltar could again be prominent on the global stage.

Andy Mok is a non-resident fellow with Center for China and Globalization (CCG) as well as a former RAND Corp. researcher who began covering China’s economic, technological, military and geopolitical rise in the early 1990s while working for a private equity group in Hong Kong. He is currently based in Beijing.